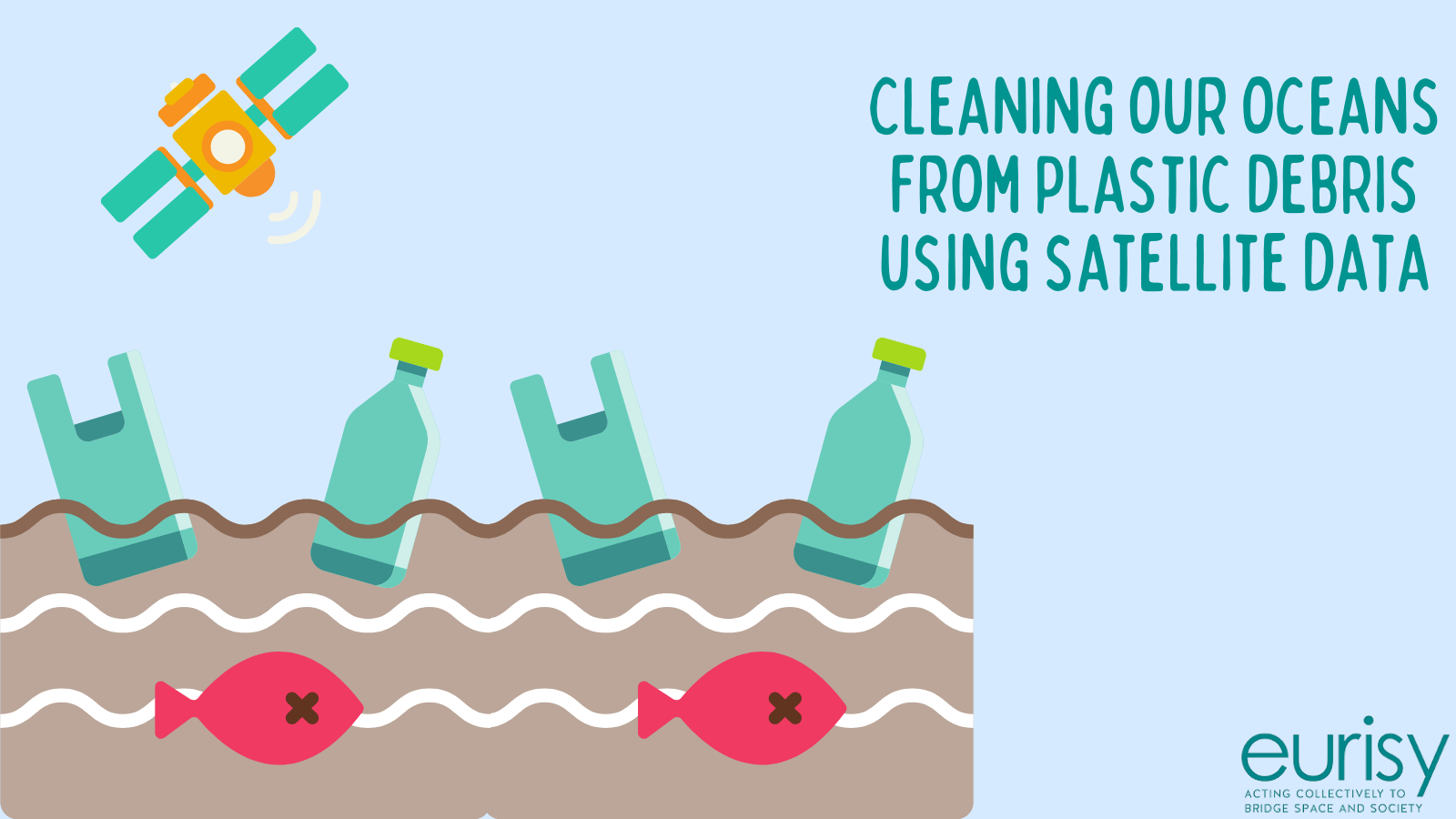 The International Union for Conservation of Nature (IUCN) defines plastic pollution as one of the most widespread challenges affecting ocean health and food safety, endangering the natural balance.[1]

Floating plastic debris represents today the most abundant marine litter. The consequences deriving from the high concentration of disposable plastic in the ocean are heavily affecting multiple subsectors of the blue economy, such as aquaculture, fisheries, tourism, navigation, etc. 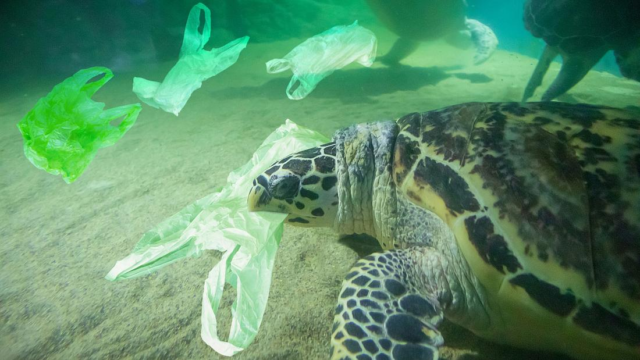 UNESCO estimates that by 2050 there will be more plastics than fishes in the oceans. Each year, more than eight million tons of plastic trash are poured into the oceans, which means that 253 kilos of plastics are discharged every second in the oceans. [2]

Plastics have been detected on shorelines, in particular nearby touristic or densely populated areas. Most marine plastic originates from the land- and is caused by human activities (industries, illegal dumping, tourism, etc.). Other plastics originate from the sea itself, e.g. from fishing industries, aquaculture and nautical activities. [3]

Impacts of plastic pollution at sea are visible on the marine ecosystem, threatening marine species. Indeed, plastic debris is often swallowed by marine species causing severe injuries and deaths, also putting human health and food safety and quality at risk. Many species die or have chronic injuries, especially marine birds, turtles and whales. In particular, most sea species often confuse small plastic debris for food, ingesting them and enabling the proliferation of harmful toxic substances. In addition to this, floating plastic debris carries bacteria or other invasive marine organisms that can damage ecosystems, altering the marine food equilibrium. [4]

Coastal areas represent one of the main sources of plastic pollution at sea, especially river mouths where about 75% of plastic trash tends to accumulate. Indeed, where fresh and saltwater meet, waste accumulation lines tend to create naturally. Detecting and removing such debris is of paramount importance to reduce the negative impacts of plastics on the marine ecosystem.

Space technology and data to tackle plastic pollution at sea

Satellite technology and solutions, combined with in-situ measurements and ocean models, can play a role in monitoring plastic litter, providing information on its abundance, concentration and movements at sea.[1] 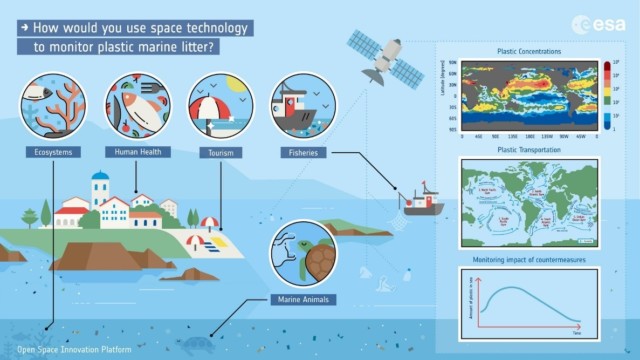 The I Clean My Sea App: Technology and collective efforts to protect our seas and oceans

I Clean My Sea is a French start-up based in Nouvelle Aquitaine. It has been founded in 2019 by Aymeric Jouon, oceanographer and founder of the company Hydro-cote.

Building on the experience of its founder, I Clean My Sea develop debris collection services that support decision-makers in the fight against marine pollution. At the same time, the company aimed at building an engaged user community active in the fight against marine plastic pollution, a global challenge that asks for the involvement of citizens, professionals in the marine and maritime domains, as well as local administrations.

I Clean My Sea provides services to detect, collect and recycle floating plastics in coastal areas. The start-up has benefitted from an incubation grant from the Communauté d’agglomération du Pays Basque, and currently is a laureate of the European Space Agency (ESA) Business Incubation Centre (BIC) Sud France programme to encourage satellite technology transfer in the maritime domain.

To boost citizens’ involvement in the identification and removal of plastic debris, in July 2020 I Clean My Sea launched a crowdsourcing namesake app. The app allows people around the globe to detect floating marine debris and to photograph and geolocate them. The aim is to facilitate the collection of waste at sea using crowdsourcing information and new technologies.

To collect the dump, the company, with the support of the Region Nouvelle Aquitaine, deployed a collector boat in 2020. Collector boats are conceived by the Race for Water Foundation, and specifically designed to collect floating waste in river estuaries, shorelines, and marine waters.

The sailors involved in the collection process also have access to the drift forecast derived from the physical model elaborated  by the Copernicus Marine and Analysis and Forecast Service, which provides a weekly 3D hydrodynamic forecast of the ocean  currents combining satellite data and in-situ observations.Once a picture is taken by the app user, the sailors aboard the  Collectors receive the location of the dump and the forecast of its trajectory in real time. The initial prototype of the app included a drift trajectory map built by Hydro-Cote. To implement the hydrodynamic process, I Clean My Sea started to rely on Copernicus services and products.

Thanks to this information, sailors get access to dump trajectories and collect the debris.

The collected plastics are then recycled by specialised firms to produce an I Clean My Sea branded product “100% marine sourced” for sustainable usage.

The app, as a participative tool, aims at helping sea actors and local coastal authorities in being more effective in collecting plastic debris. It can also help to identify the most polluted areas to support decision-making processes aimed at protecting the marine environment.

By the end of 2020, the app has been downloaded by 500 users and about 3.5 tons of floating debris have been collected. Currently, the I Clean My Sea App waste collection ship is mainly active on the Basque Coastline and the Adar estuary, but in the near future it will operate on a broader geographic area. 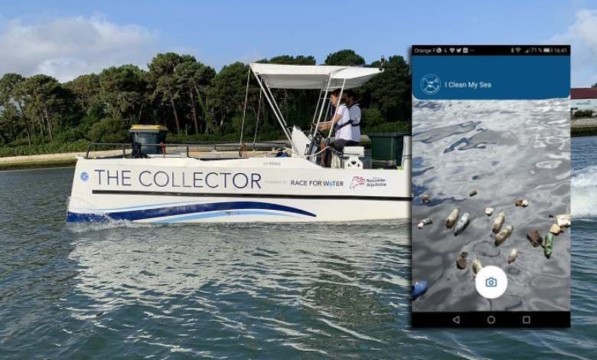 Furthermore, in the next two years, I Clean My Sea will develop an algorithm in collaboration with ESA.  Relying on satellite imagery, the algorithm will allow for the identification of the accumulation of floating debris at seas. At the same time, starting from 2022, the company intends to look for more solutions to valorise floating debris and support the financial effort needed to collect plastics at sea.

For more information please visit the I Clean My Sea site.

Help us keep our oceans clean, download the app and stay connected!

[3] International Union for Conservation of Nature (IUCN), in ibid.