Foster the development of innovative applications, bridge the gap between research and real-world needs, and establish international cooperation. This is the formula of the STEREO programme of BELSPO to support research in Earth observation. 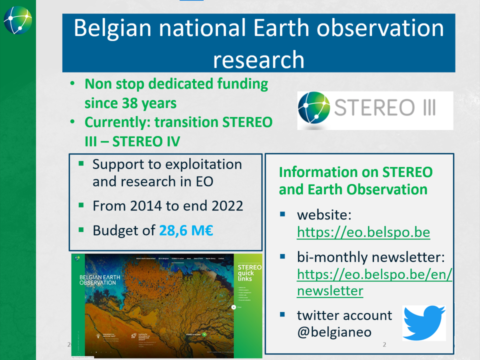 After the welcome given to the participants by Ms Dominique Tilmans, Eurisy president and former senator of Belgium, this new episode of the Eurisy Members’ Corner series was introduced by Jean-Christophe Schyns, from BELSPO’s Earth Observation programme.

The STEREO programme (Support To Exploitation and Research in Earth Observation), managed by the “Space Research and Applications” directorate of BELSPO, offers to Belgian universities, public scientific institutions and non-profit research organisations opportunities and tools for the development of an expertise in Earth observation and a maximised scientific use of satellite and airborne data.

The current edition (STEREO-III) will end in 2022, but a new call has already been released to look for applicants for the next programme’s phase. Considering the relatively small size of Belgium, the investments made in this programme by the government are not negligible at all.

The programme funds projects with a duration of 2-5 years with a budget that currently ranges from 200.000 up to 1 million EUR, according to the scope of the project and the number of partners involved. Non-Belgian institutions can also be partners in this funding scheme.

Epidemiology and Urban Studies have been among the thematic priorities of STEREO-III, which funded three interconnected projects on population and malaria risk in sub-Saharan African cities. Such projects included five Belgian and three foreign research teams with a total budget of 2,25 M EUR, and aimed at developing tools based on EO to be made freely available to the local populations. 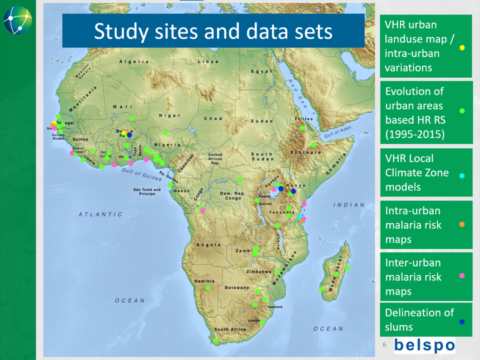 Catherine Linard, from the Department of Geography of the University of Namur, presented two of these projects, MAUPP and REACT.

Even though in Africa only 40% of the population lives in cities, urbanisation represents a growing trend, and a challenge for urban planners who need to adapt the cities’ infrastructure to a growing population.

The STEREO-III projects presented in the webinar aimed at providing urban planners with the data they need to prepare for upcoming risks in African cities. Indeed, even if large-scale gridded population datasets exist, the quality of such data for African cities is often insufficient for urban planning. 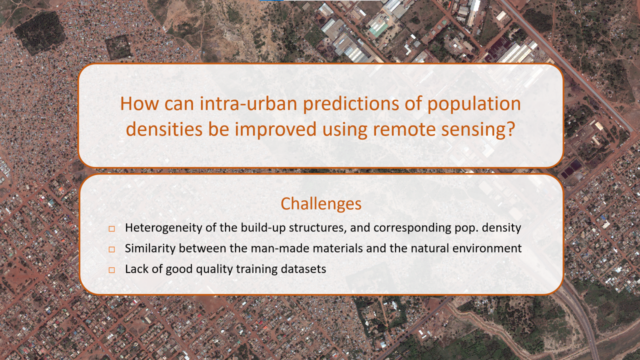 To estimate and monitor risks in cities, planners need data on the risk areas and on the population living there. When observing high resolution images of African urban areas, the researchers saw that such cities are very heterogeneous in the materials used for building and in their natural features, which makes it particularly difficult to build a system to characterise urban areas that could be immediately adapted to different cities.

Within the MAUPP project (Modeling and forecasting African Urban Population Patterns), aimed to build a monitoring system on urban areas that could be refined, researchers used high-resolution images (30-100 m) on 48 African cities and very-high-resolution images (<5 m) in the cities of Ouagadougou and Dakar. Satellite imagery allowed them to realise land cover and land use maps and detailed intra-urban population datasets for these two cities. 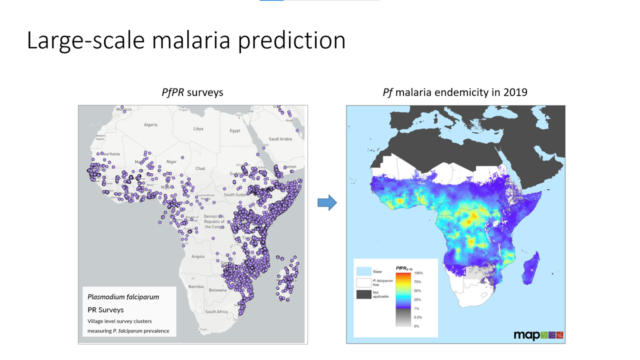 Within the REACT project (Remote Sensing foe Epidemiology in Sub-Saharan African CitTes), scientists used satellite imagery to improve knowledge of intra- and inter-urban malaria risk. They started by collecting feedback from the population through a survey. The results of the survey were then coupled with EO data on climate variables influencing vector-borne diseases (such as temperature, humidity, and vegetation), to identify hotspots where diseases are more likely to be transmitted within urban areas.

The project included knowledge transfer workshops aimed at providing local stakeholders with the capabilities to use the EO-based maps produced.

According to Ms Linard, it is very important that the EO datasets produced within projects are used by local urban planners, but it is also crucial to inform them about the uncertainties of such datasets. 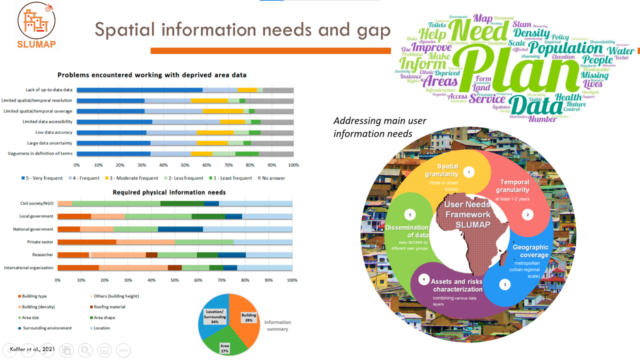 Sabine Vanhuysse, from the Earth Observation and Geospatial Information Science department of the Free University of Brussels, presented the SLUMAP project (Remote Sensing for Slum Mapping and Characterisation in sub-Saharan African Cities), aimed at developing an open-source framework for the processing of remote sensing images to identify and characterise deprived urban areas.

The first target of the Sustainable Development Goal 11 aims at ensuring safe and affordable housing for all by 2030. Nevertheless, the UN estimates that 1 billion people still leave today in deprived urban areas.

To support a better management of deprived areas in African cities, the researchers involved a number of local stakeholders in a needs’ assessment that highlighted a gap in spatial data in such areas. Also in this case, the heterogeneity of deprived urban areas represented a challenge for the transferability of a satellite-based system to characterise deprived areas in different cities. At the same time, the cost of very high resolution images limits the scalability of such solutions. 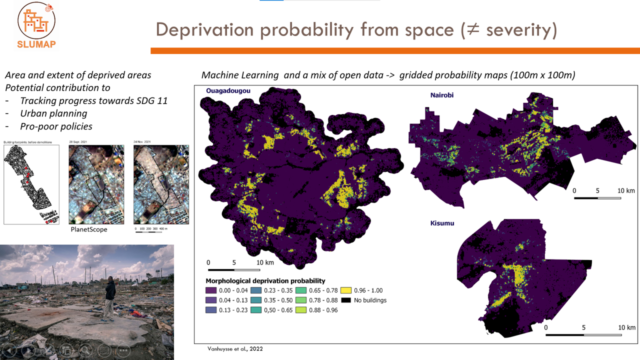 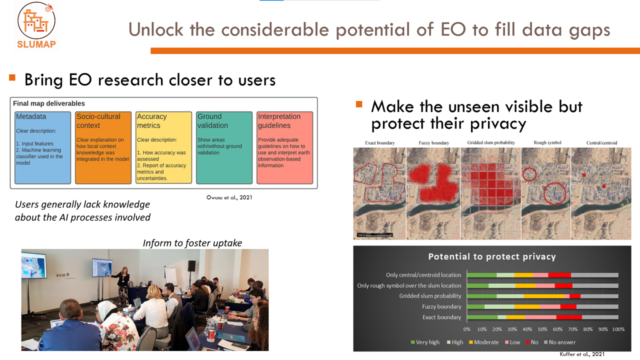 EO images were also shown to the local population through a mobile app, in order to assess the perception of deprivation of local populations. Such perception data were then used to calibrate the EO data. The results of the project are meant to be used by local associations to claim measures to improve living conditions in the studied urban areas.

To know more about the activities of BELSPO visit: https://spaceoffice.sk/

The recordings of the webinar are available here:

Stay tuned for the next webinar of the Eurisy Members’ Corner that will be hosted by the French National Centre for Space Studies on the 1st of July 2022 between 11:00 AM and 12:00 AM CET: https://bit.ly/3aoVkBx