After the first three introductory sessions on the EU directive on the resilience of critical entities, the “Space 4 Critical Infrastructure” series turned towards the first of its five thematic sessions.

The focus of the webinar was on how space technology can secure the protection of critical infrastructure at regional and nation level in case of large-scale accidents, natural disasters or any other threats that can affect human assets and people’s safety. The webinar aimed at shedding light on how space technology can support public authorities in their safety and security missions. The European Union Agency for the Space Programme (EUSPA) explained what their future plans are in this respect, while the European Satellite Centre (SATCEN) talked about what they are doing to secure communications during emergencies. Finally, the webinar showcased an example of use of Earth observation to monitor critical areas at the regional level.

EUSPA and the critical infrastructure market

Among other tasks, the European Union Agency for the Space Programme (EUSPA) aims at promoting the use of space services to achieve a sustainable economic growth, while improving safety and security of European citizens. The Agency actively works with user communities, including public administrations, in multiple fields. Critical infrastructure is one of the segments targeted by the agency to support the development of new space-based services and the market penetration of Galileo, the European Global Navigation Satellite System.

As explained by Valeria Catalano, Market Development Officer at EUSPA, the critical infrastructure market segment is in constant growth. Indeed, it is fundamental that citizens are granted access to health, safety, security, and financial services, also during major disasters.

According to EUSPA’s market forecasts, over the next 10 years this market will continue to grow, especially due to the 5G roll-out. On the one hand, EUSPA is working to support the market penetration of Galileo to provide people with better timing and synchronisation accuracy. On the other hand, the Agency is working to develop GOVSATCOM, the European Union’s space-based communication services that will facilitate security-critical missions and operations, and the management of critical infrastructures.

The main areas where GOVSATCOM can be fully integrated into the operations of public administrations are crisis management, surveillance, and the protection of key infrastructure (including EU member states diplomatic networks, space infrastructure, financial infrastructure, energy grids, telecommunications, and ICT).

Within this framework, EUSPA is leveraging on its user centric approach to coordinate the ENTRUSTED initiative (European Networking for satellite Telecommunication Roadmap for the governmental Users requiring Secure, inTeroperable, InnovativE and standardiseD services), one of the preparatory activities for EU GOVSATCOM.

The European Union Satellite Centre, SatCen is an agency under the EU common foreign and security policy that supports the decision making and actions of the European Union in the field of Common Foreign and Security Policy, including the European Union crisis management missions and operations. Paula Saameno, Research, Technology Development and Innovation Project Manager at SatCen, provided the audience with more details on ENTRUSTED.

ENTRUSTED identifies use cases in which secure satcom services can enhance current capacities and operations. It does so through a network of users composed of EU member states and EU entities, including the French and Italian Space Agencies (CNES and ASI), the Polish Space Agency (POLSA), the Netherlands Space Office (NSO), the Greek Ministry for Digital Governance, the European Union Joint Research Centre (JRC), the European Defence Agency (EDA), the European Maritime Safety Agency (EMSA), the European Border and Coast Guard Agency (FRONTEX) and the EC’ Directorate-General for European Civil Protection and Humanitarian Aid Operations (DG ECHO), among others. 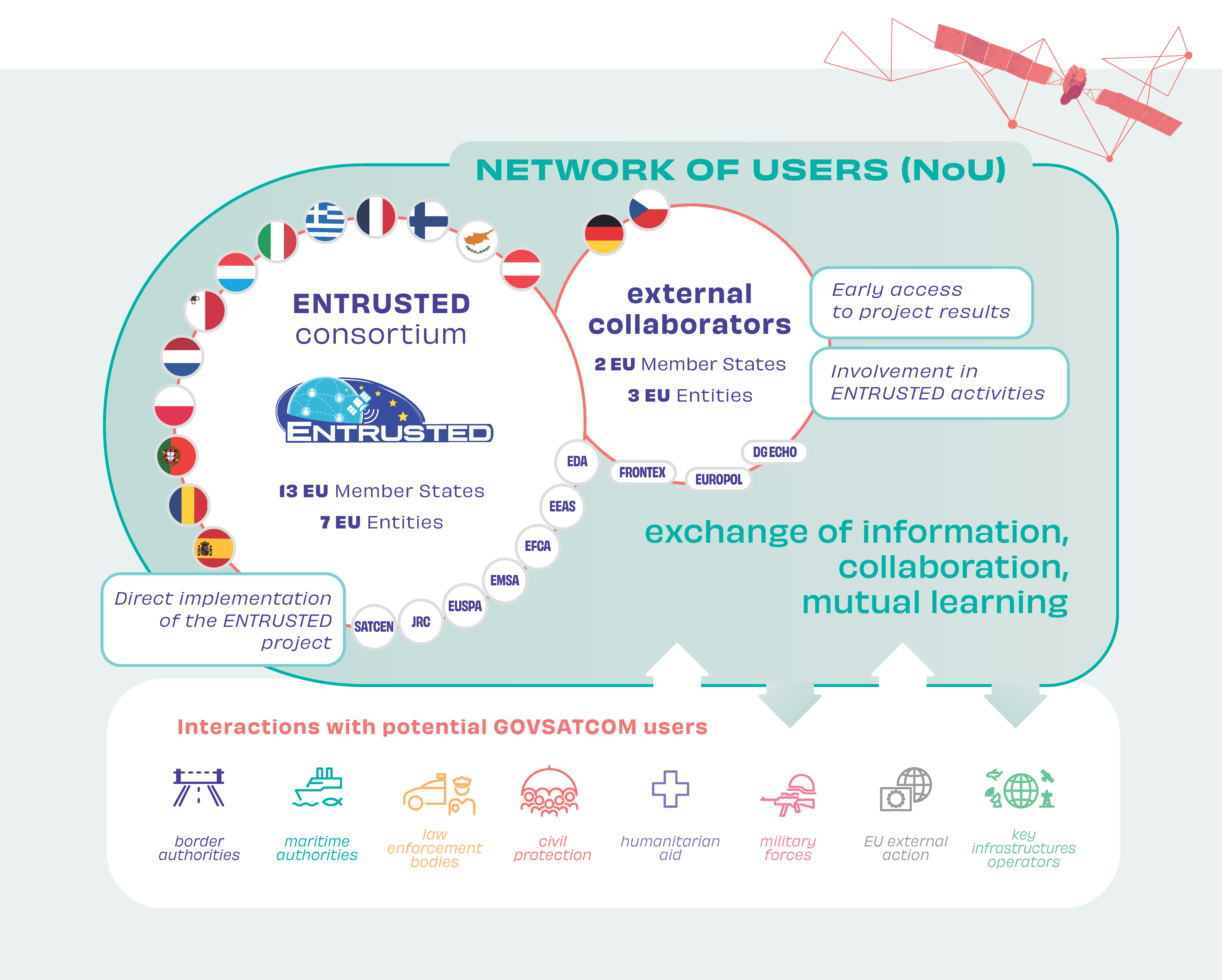 Within the project, SatCen is responsible for the relations with end users. Between April and June 2021, they launched an EU-wide consultation to identify user requirements in the sectors of border surveillance, maritime, law enforcement, civil protection, and defence. Over 450 users that expect to rely on satcom services for their operations (e.g. law enforcement bodies, maritime authorities, civil protection entities, etc.) were identified, with a high interest coming from crisis management and key infrastructure operators. Currently, the SatCen is finalising the drafting of a report on the results of the survey, that will be published over the next months. The user requirement analysis will be key to understand the state-of-the-art of the use of SatCom, to identify future trends, and to contribute to the definition of the long-term R&I roadmap.

The Strategic Regional Agency for the Sustainable Development of the Territory (ASSET) is the body in charge of strategic planning, integrated programming, design, and implementation of public works in Apulia. It works closely with the regional soil department, responsible for monitoring of hydrological risk events. ASSET is responsible for urgent interventions, such as infrastructure consolidation.

In cooperation with Planetek, ASSET tested a pilot solution to use satellite data to monitor 16 sites vulnerable to hydrogeological hazards. Earth observation data allowed ASSET to identify and classify landslides and to analyse the interactions among such landslides and the infrastructure in the selected areas. The pilot project, in its initial phase, aimed at helping the stakeholders to understand the current situation of the identified areas and to make them aware of the potential of EO data to monitor soil movements. For example, in the area of Bovino (in the northern area of the region), characterised by a multi-aquifer fed by abundant rainfall, the project identified cyclical movements that can stress the materials of infrastructures and buildings. Similarly, in the area of Celle di San Vito (close to Bovino), the soil has been monitored in the post-construction phases of a football field in an area affected by hydrogeological risks.

The collection of data has been possible through Planetek’s Rheticus Displacement and Safeland tool, an automatic cloud-based geoinformation service that aims at monitoring ground-surface movements. The service uses both in-situ data and Copernicus or COSMO-SkyMed data. Rheticus was used to analyse a rather wide portion of the Apulia region’s territory, allowing ASSET to put in place resilience measures and to reduce the effects of hydrological accidents.

As explained during the previous introductory sessions, public administration is one of the sectors identified in the proposed EU Directive on the resilience of critical entities. The instrument aims to set minimum standards for an all-hazards EU-framework supporting EU member states in their national efforts to ensure that critical entities can prevent, resist, absorb and recover from disruptive incidents, no matter if they are caused by natural hazards, accidents, terrorism, insider threats, or public health emergencies.

The EU space programmes can play an important role, not only to help operators of critical entities to protect against possible incidents, but also to bounce back into full operation afterwards. To this end, market developments are underway. Not only on a European scale, but also at the national and regional levels.

More info and the agenda can be accessed here: https://www.eurisy.eu/event/banking-financial-market-infrastructures/agenda/

Watch the full recordings of the webinar on Public Administration here: