The Bologna Agency for Mobility and Local Public Transport – SRM

Bologna is the capital of the Emilia-Romagna region, in Italy. The city has a population of about 386,298, for an area of 140.7 km2. Its metropolitan area hosts about one million inhabitants.

The Agency for Mobility and Local Public Transport – SRM was established in 2003 to manage the public transport infrastructure in Bologna. Among other activities, the Agency plans and promotes integrated transport policies and sustainable urban transport, in collaboration with other relevant local bodies.

Bologna does not face the same transport difficulties as bigger Italian cities. It can rely on an efficient public bus network covering the entire greater urban area with a frequent service. Nevertheless, private vehicles remain the most common mode of transport for daily movements in town. As a consequence, traffic and pollution are among the main causes of discontent for local residents and commuters.

To improve mobility, air quality and citizens’ well-being, the Agency for Mobility and Local Public Transport was looking for means to reduce the use of private vehicles, especially for daily itineraries of less than five kilometres. Moreover, the Agency needed up-to-date, reliable information to plan the construction and improvement of cycle lanes, and to facilitate intermodal transport.

In 2011, Bologna was the first European city to organise a cycling challenge between teams from different neighbourhoods. The initiative received communication support from the CIVITAS and Polis networks. Since then, the challenge took a European dimension and is currently implemented in 39 cities.

The European cycling challenge takes place every year during the whole month of May. Individuals, teams and cities can join the competition through a web portal and a free mobile app (Cycling365) to track their biking itineraries. The web portal stores all the information on the number of kilometres cycled, as well as the itineraries run. Each participant, team and city is able to visualise their rank compared to other participants, which stimulates competitiveness and engagement. Thanks to satellite navigation, all the information is recorded and made available in real time. At the end of May, prizes are awarded to participating individuals, teams and cities.

An important feature of the initiative is that the itineraries tracked with satellite navigation are used to generate daily updated “heat maps” of the routes most covered by cyclists, which are also available on the web portal. 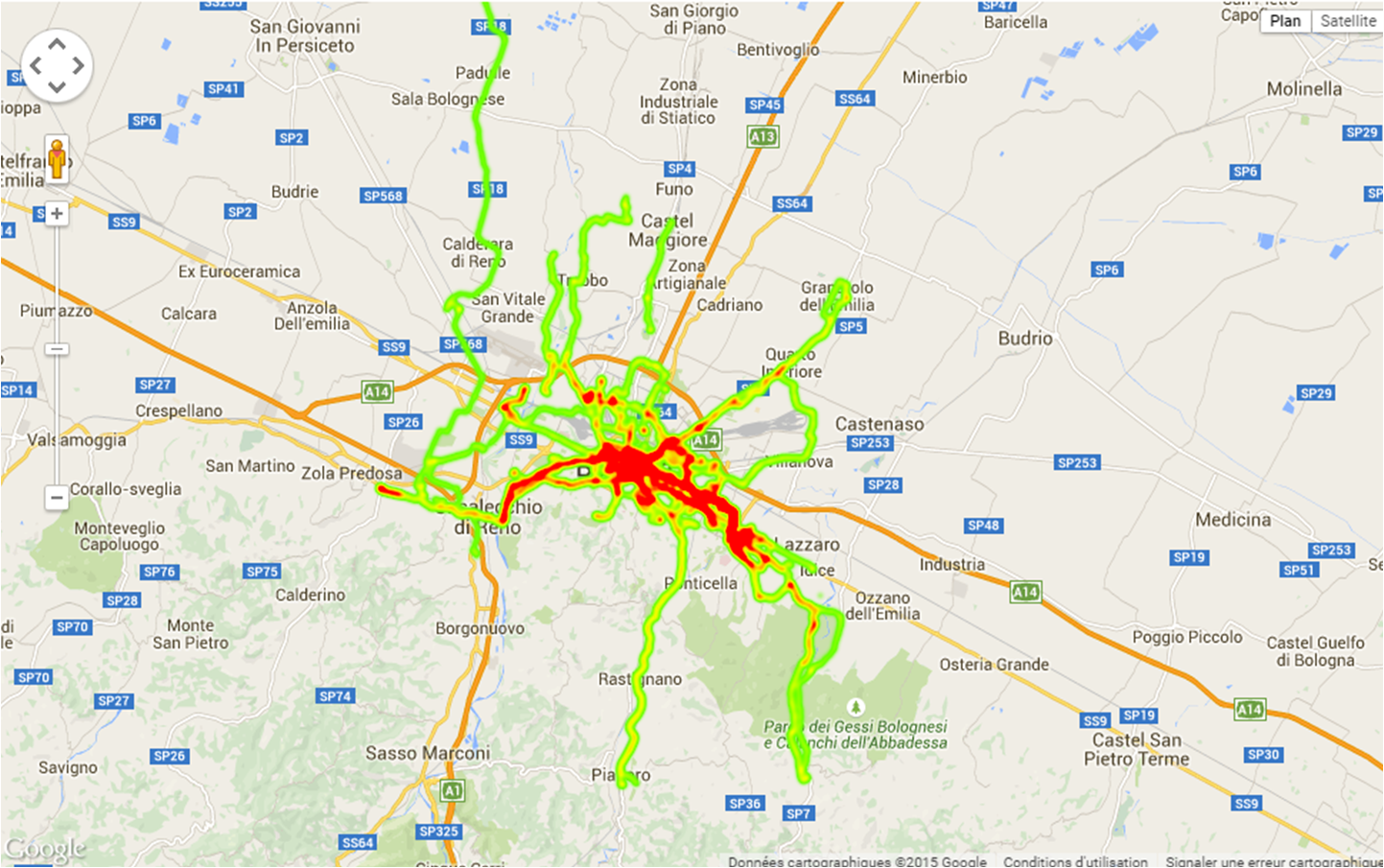 Since its first edition, the challenge raised an increasing interest, involving a growing number of cities and cyclists. Not only did the initiative succeed in changing behaviours by promoting biking (in 2014, biking accounted for 10% of total urban movements), but it also provides cities with information that can be used to enhance sustainable mobility.

All the data recorded belong to the city authorities and are used to plan construction and improvement of cycle lanes, or to facilitate intermodal urban transport. Furthermore, the challenge allows participants to reclaim public spaces as a place to meet, exchange and interact within the community, thus improving quality of life in general.

By tracking cycling itineraries during a whole month, we are able to collect information on a phenomenon – urban cycling – that is usually not very visible. These data allow us to better monitor and to plan measures to improve sustainable mobility in Bologna”. Dora Ramazzotti, General Affairs Manager, Bologna Agency for Mobility and Local Public Transport