The members of the Helsinki Commission are the nine Baltic Sea states (Denmark, Estonia, Finland, Germany, Latvia, Lithuania, Poland, Russia and Sweden) and the EU, which are Contracting Parties to the Helsinki Convention. The aim of the intergovernmental cooperation is to protect the Baltic Sea from all sources of pollution and to ensure safety of navigation in the region.

Oil spills are one source of pollution, among other substances from ships and from land. Even small amounts of oil can have a negative impact on the marine environment; seabirds for instance are very sensitive to oil.

Any oil and oily mixture discharges into the Baltic Sea are prohibited according to IMO MARPOL Annex 1 special area regulations. However, HELCOM statistics, based on detections by national surveillance aircraft, show that over 100 illegal oil discharges by ships occur every year in the Baltic Sea.

In order to prevent and detect any violation of existing discharge regulations, the Baltic Sea states have agreed within the HELCOM framework to regularly conduct aerial surveillance, individually and jointly.

Regular aerial and satellite surveillance has contributed significantly to the decrease in illegal discharges of oil in the last ten years because ships are aware that their activities are being monitored.

In 2013, a total of 565 satellite scenes were provided by EMSA to the users of CleanSeaNet in the Baltic Sea indicating 130 possible detections of which the national surveillance aircraft were able to inspect 61% within three hours of the first warning.  Of these detections the aircrews were able to confirm 5% as mineral oil spills, 11% as spills of other oil types, chemical, sewage or garbage, and 8% as unknown substances. Typical false positive detections are caused by natural phenomenon like waves. 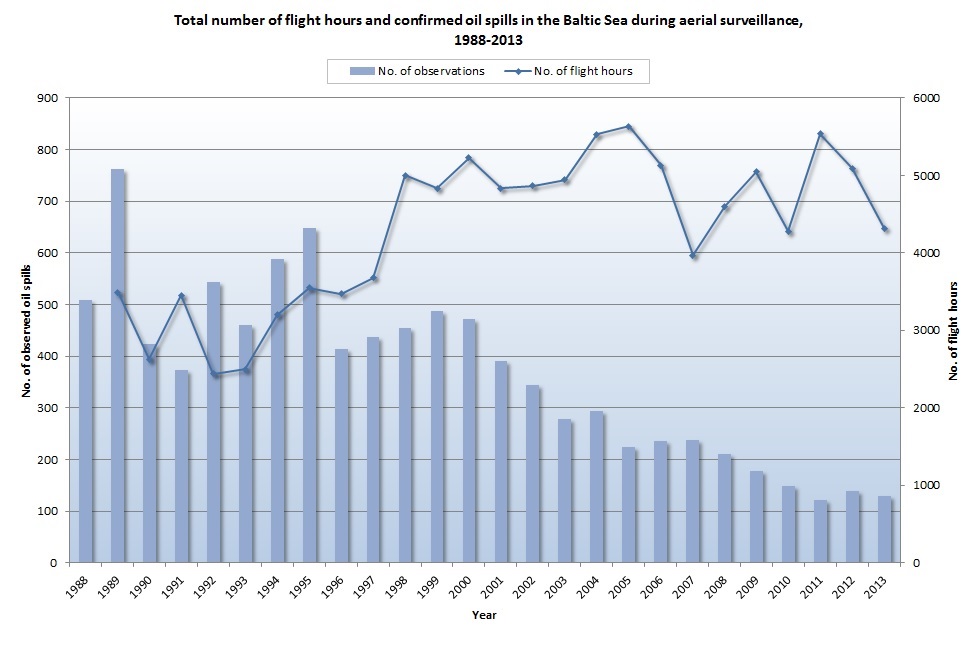 The EMSA CleanSeaNet service has proven to be a valuable asset in the Baltic Sea in deterring and monitoring illegal oil spills as it provides near real time information on potential spills when the opportunity to detect spill and to catch potential polluters is time-limited. Laura Meski, Baltic Marine Environment Protection Commission