Because of its position between Europe and Asia, Palmyra, in Syria, was a global centre of trade and a landmark between different western and eastern cultures.

Palmyra is listed in the UNESCO World Heritage in Danger List and is the most iconic picture of the conflict in Syria.

The intentional damage to local cultural heritage sites carried out in 2015 by the Islamic State of Iraq and the Levant (ISIL) caused worldwide indignation. The destruction has been broadcasted by media worldwide, pinpointing the need for prompt, safe and non-invasive damage detection and assessment surveys.

Between 2015 and 2017, ISIL destroyed the biggest part of the Palmyra Old Town, including the Temple of Bel, the Temple of Baal Shamin, the Arch of Triumph, and several columns in the Valley of the Tombs.

To assess the damage suffered by the Palmyra site, the German Archaeological Institute (DAI) asked the German Aerospace Centre (DLR) to analyse a series of satellite images of the site over a one-year period. 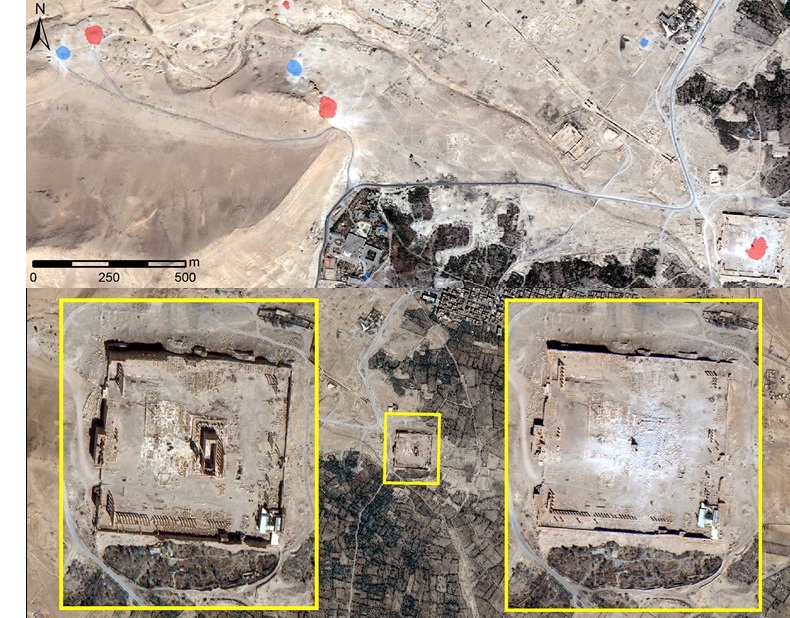 Based on the analysis of the images, the DLR put together a chronological map of the induced damage to the site. The images reveal consecutive damage, carried out before and in-between the satellite image acquisition timeframes in August and September 2015 (highlighted respectively in light blue and red in the image).

The texture of a target spotted by satellites is represented by the distribution of pixel values in its surroundings. The texture changes abruptly from smooth to rough whenever a structure is damaged or collapsed, and when the shadows projected by a building disappear. This facilitates a semi-automatic detection of damage, which helped the DAI decide on and plan its support for reconstruction works once the site became accessible again.

Once ISIL was expelled, UNESCO was given the task to restore the site to its former glory. Several countries and EU institutions also pledged funding and expertise to expedite restoration works which began in 2017.