Vienna: Adapting urban planning to climate change with the support of satellite imagery 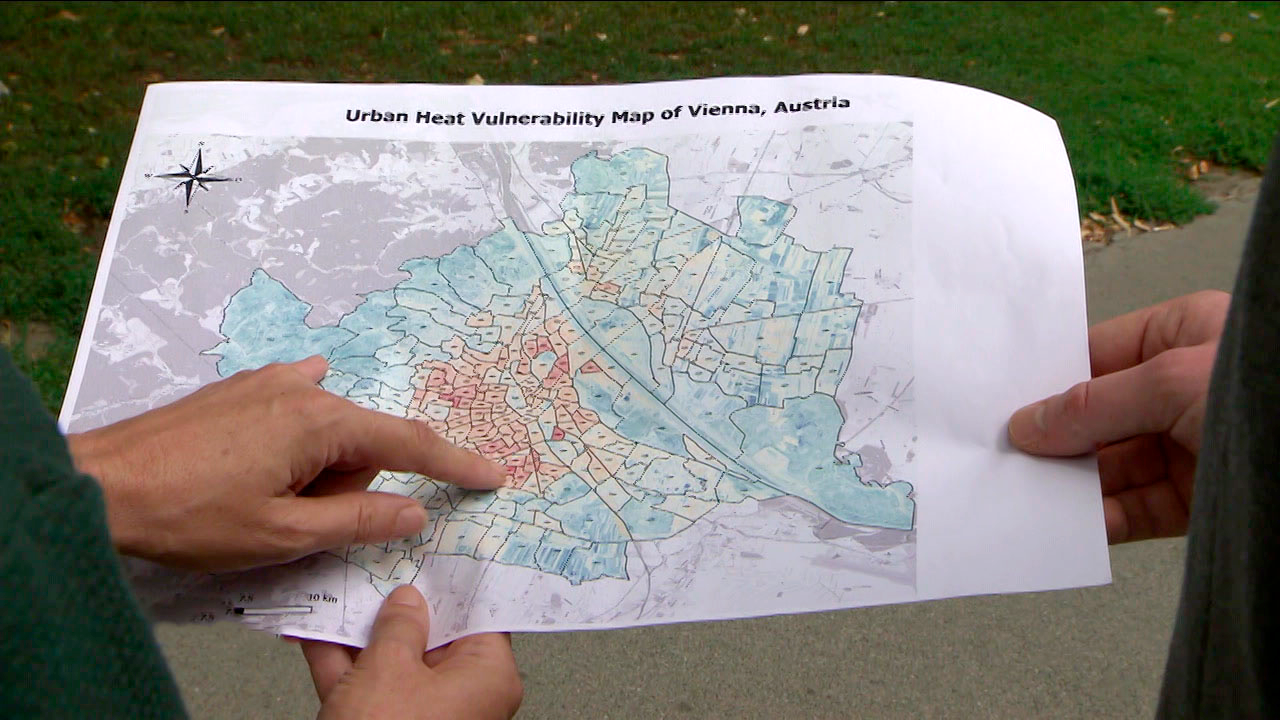 The Department of Energy Planning of the City of Vienna acquired information on urban heat islands, useful to implement mitigating measures, on the basis of information derived from Earth observation.

The Department of Energy Planning of the City of Vienna

In 2019, The Economist ranked the City of Vienna, in Austria, as the city with the highest quality of life worldwide. Indeed, the City’s administration believes in the value of innovation to cope with climate change and reach excellence in the delivery of public services.

The Department of Energy Planning of the City of Vienna is responsible for implementing sustainable policies in the energy sector, allocating funds and testing innovative solutions to produce energy out of renewables, increase the use of waste heat and promote energy-efficient and climate-friendly mobility.

Among other tasks, the Department issues a periodical Energy Report aimed at raising residents’ awareness on the status of energy and climate-related issues in Vienna.

Urban areas are generally warmer than their surrounding areas. This phenomenon, known as “urban heat island effect” can cause health risks and higher energy consumption in cities.

In the past years, the urban heat island effect in Vienna has been exacerbated by a growing population and an increase in urban development, which led to the loss of permeable open green spaces and to higher temperatures.

In 2003, the city experienced 44 heat wave days, which were responsible for 180 deaths. Forecasts predict that between 2021 and 2050, there will be an average of 19 heat days in Vienna, while the population is expected to increase from 1.8 million to 2 million by 2029.

To prevent health risks to the residents of Vienna, the Energy Planning Department was hence looking for ways to identify urban “hot spots” and take measures to mitigate the consequences of increasing temperatures in the city.

In 2019, the Department asked ECOTEN Urban Comfort, a company based in Prague and specialised in urban and environmental engineering, to map heat islands in Vienna to help them identify where action was the most needed.

After assessing the needs of the Department, the company defined the relevant indices to assess the city’s vulnerability to heat waves. Exposure, which is the prevalence of high temperatures across the city, was calculated by looking at images from the Landsat 8 satellite from 2015 to 2019.

Sensitivity was measured based on the density of vulnerable people (younger than 14 and older than 65) with data derived from Vienna’s Open Data portal.

Finally, adaptive capacity, which represents the ability of the urban ecosystem to cope with heat events thanks to the presence of greenery and waterbodies, was calculated by using imagery from the Sentinel 2A European satellite, which carries information to estimate both the enhanced vegetation index of the city (the density of urban vegetation) and its normalised difference water index (measuring water-bodies).

The indices were then combined to create a Heat Vulnerability Map of the City of Vienna.

The map shows which areas in Vienna are more affected to heat (in orange and red), providing information about temperatures and vulnerable people in the 250 districts of the city. In total, ten heat vulnerable areas have been identified in Vienna.

The map created by ECOTEN Urban Comfort on the basis of satellite data and released by the City of Vienna is meant to serve as an operational tool by the Department of Urban Planning and other city authorities to implement mitigating measures in the neighbourhoods that are more vulnerable to heat events.

Indeed, the map contains information on high temperatures in Vienna and on areas with low vegetation and waterbodies and with a high number of vulnerable people. Furthermore, the analysis carried out by Ecoten Urban Comfort showed that, if no action was taken, temperatures in Vienna would increase of 8°C by 2050. 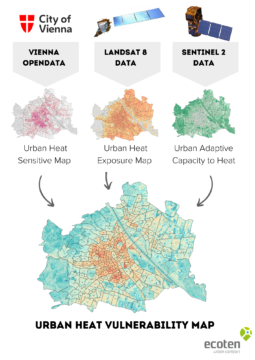 The Urban Heat Vulnerability Map initiated a series of public reactions via social media and mainstream media which ultimately led to a political debate over initiatives that the city can take to protect its citizens from extreme heat and provide comfortable eco-friendly urban districts for urban dwellers that are most vulnerable to extreme heat.

Based on the Urban Heat Vulnerability Map, in 2019 the City of Vienna launched the “Coole Straßen” (Cool Streets) project, aimed at lowering temperatures in the three districts identified as the most vulnerable to heat. In these areas, the City authorities created open spaces with trees and brighter surfaces, which reflect less heat, and installed mist showers to cool the asphalt and humidify the pavement. In addition, parking was banned in selected streets.

“For the first time we have a map that shows us where cooling is urgent and allows us to take specific measures.” Birgit Hebein, Former Deputy Major, City of Vienna 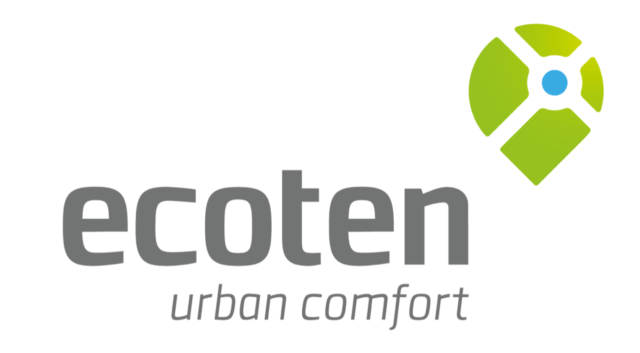