Now that we have put 2021 behind us, we can look back at it from a distance. Here is how the past year looked like all the way from space!

Climate change has become the biggest challenge of our time. Temperatures and sea levels are rising, and natural disasters occur more frequently and ferociously. Scientists and governments are looking for solutions to stop the deterioration of the environment. Space, and in particular satellite remote sensing, has a vital and often unique role to play in this context. Over the course of 2021, Eurisy has been working to promote the contribution of space to understand and potentially mitigate climate change effects. Within the Space4Environment initiative, Eurisy aims to continue contributing to climate action on different levels. For now, let’s dive back in 2021 one last time.

In January 2021, storm Filomena covered a large part of Spain in thick snow. In Molina de Aragón and Teruel, mountains east of Madrid, the temperature plunged to –25°C during the country’s coldest night in at least 20 years! This Copernicus Sentinel-3 satellite image captured the heaviest snowfall the country has had in 50 years. 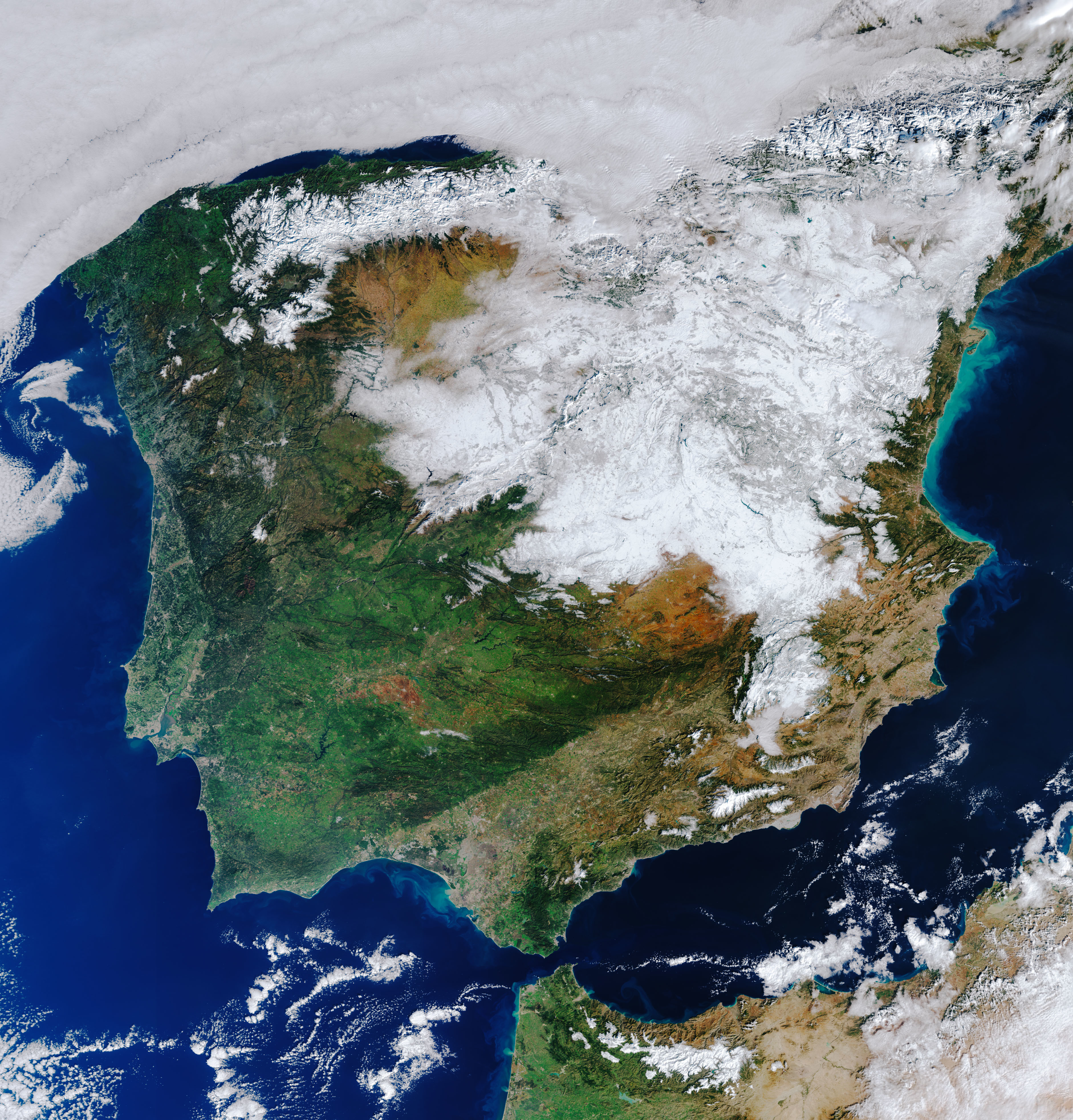 Madrid was brought to a standstill with the airport having to be closed, trains cancelled and roads blocked. Notice how the runways at the airport were covered in snow in the top-right of this Copernicus Sentinel-2 image. 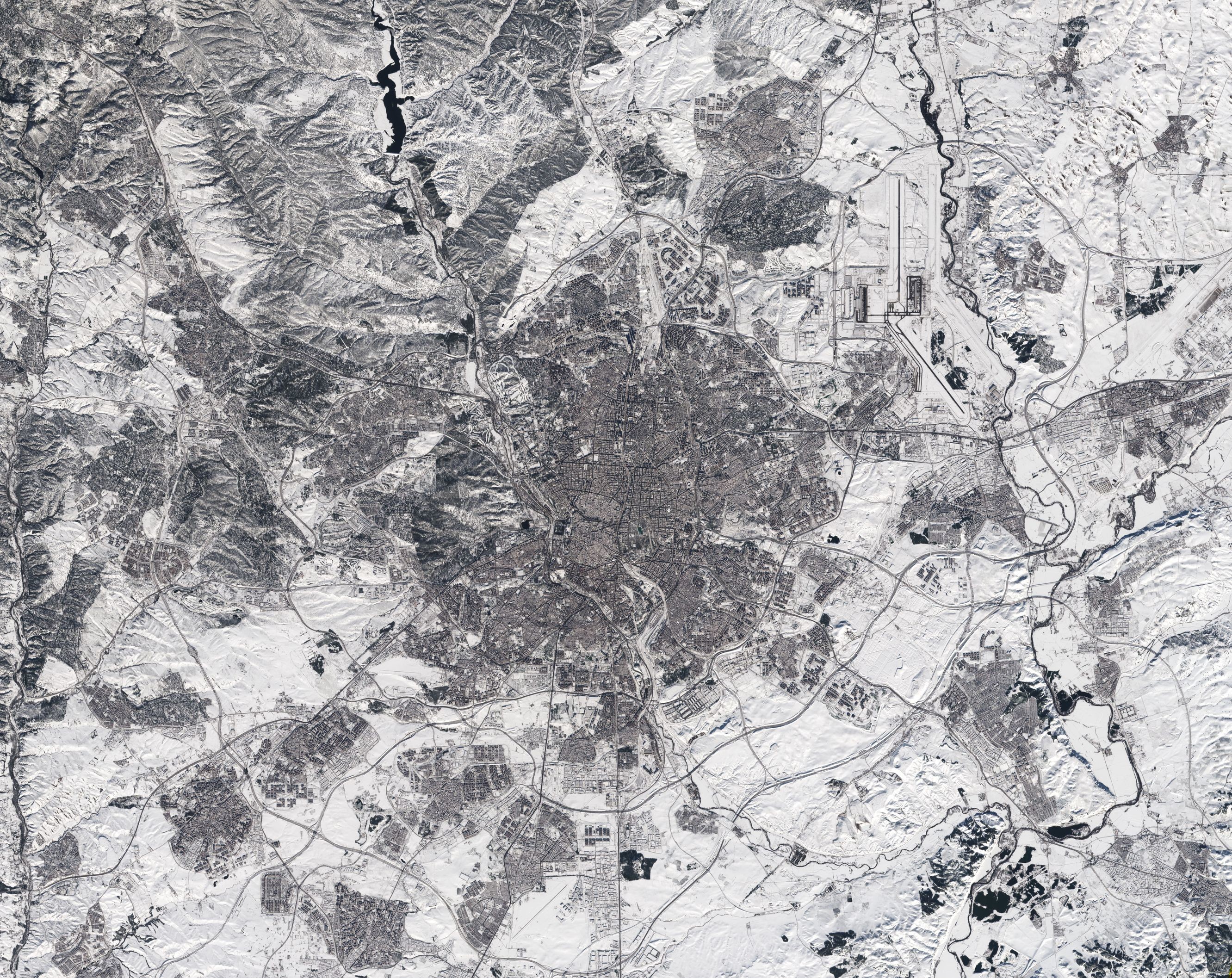 With the polar vortex sending extreme icy blasts of Arctic weather in February 2021, King Winter continued to reign in some parts of the northern hemisphere. The polar vortex is a huge mass of frigid air high above the North Pole in the polar stratosphere surrounded by a strong jet of air swirling counter-clockwise. Changes in the wind around the edge of the polar vortex triggered extreme weather events in Europe and North America, as seen in the images above with events of cold air reaching as far as Spain.

ESA’s Aeolus satellite is the first in orbit to profile directly Earth’s winds from space. In the future, Aeolus data can help us to understand whether sudden stratospheric warming events might become more frequent owing to climate change. Aeolus wind data will also be very important to better understand the mechanisms triggering weather events, thus supporting scientists and climatologists to predict consequences and prevent most hazardous effects. 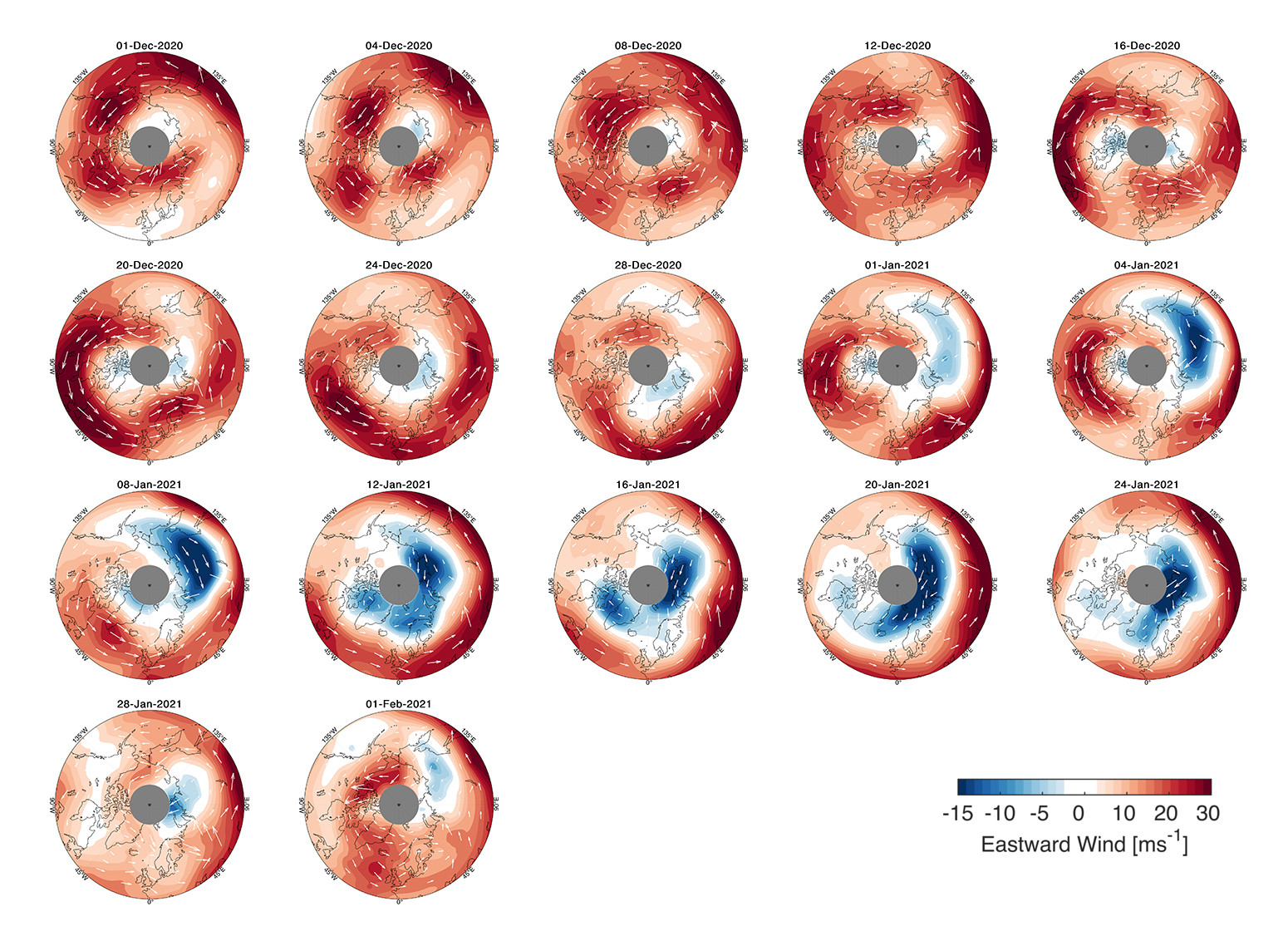 All hands on deck

Who would not remember the images of the Ever Given container ship blocking the Suez Canal, one of world’s busiest waterways. Numerous remote sensing companies turned it into an opportunity to showcase their capabilities. Here are just a few examples: 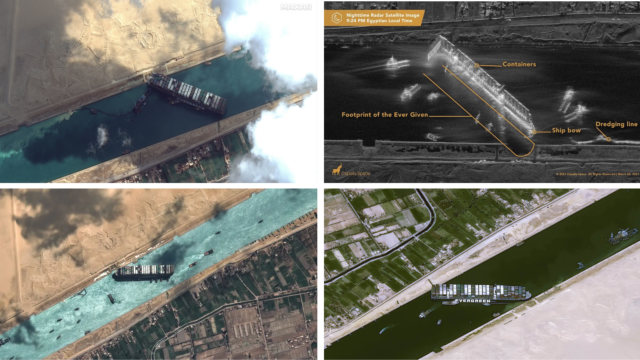 The Copernicus Sentinel 1 joined the fleet of earth observation imagery and was able to show a comparison between the canal on a ‘normal’ day and the traffic jam caused by the incident. 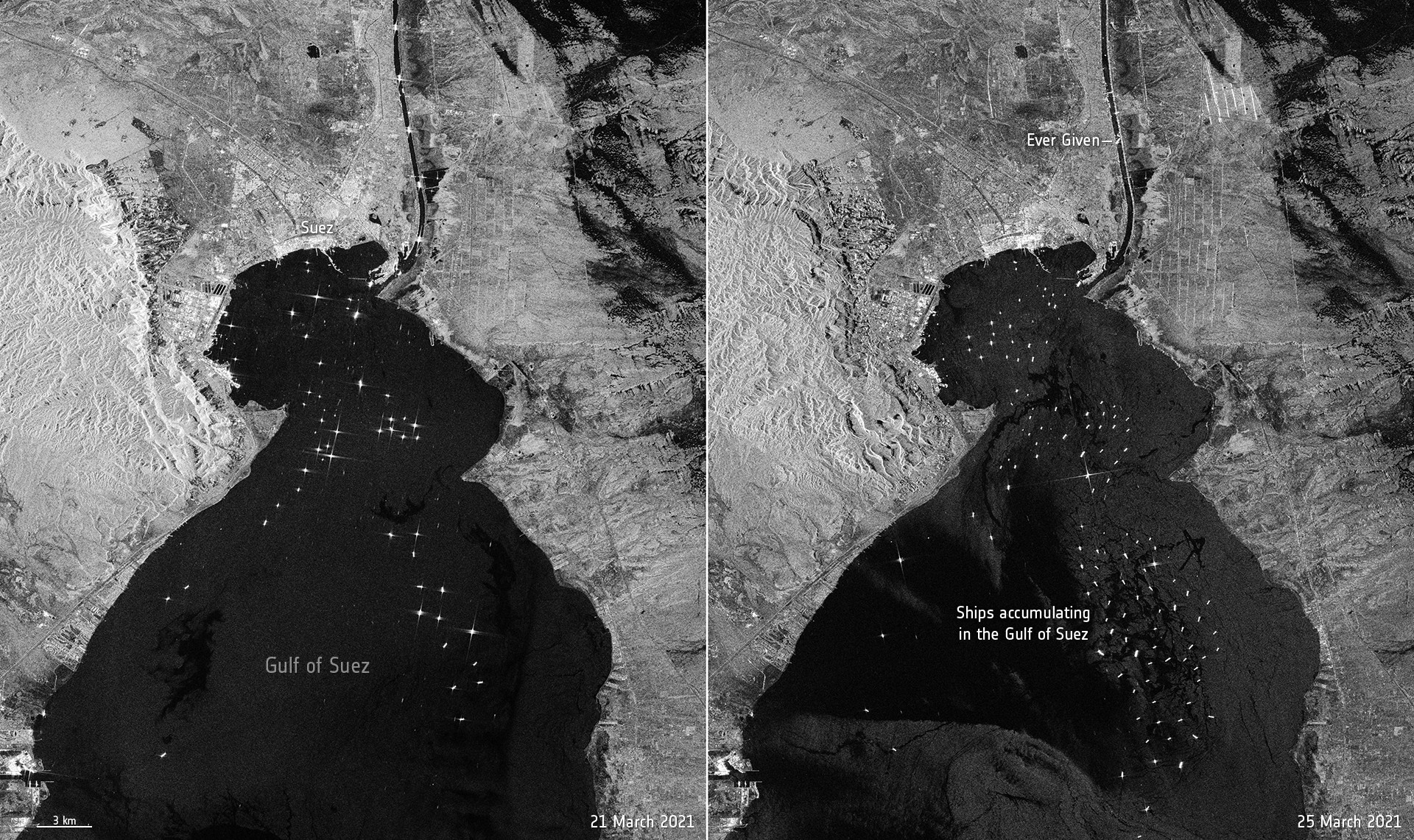 The Mediterranean covered in smoke & dust

Europe’s most active volcano, Mount Etna, was on explosive form throughout the first few months of 2021. In less than three months it erupted 17 times. During these events, gases and aerosols were released in volcanic clouds. The presence of these clouds in the atmosphere affect air quality, environment, climate, human health, and can be extremely dangerous for aviation safety. Atmospheric sensors on satellites can identify the gases and aerosols released, as well as quantify their wider environmental impact. The image below, captured by the Copernicus Sentinel-5P satellite, shows the sulphur dioxide concentrations visible travelling southwards towards Libya. 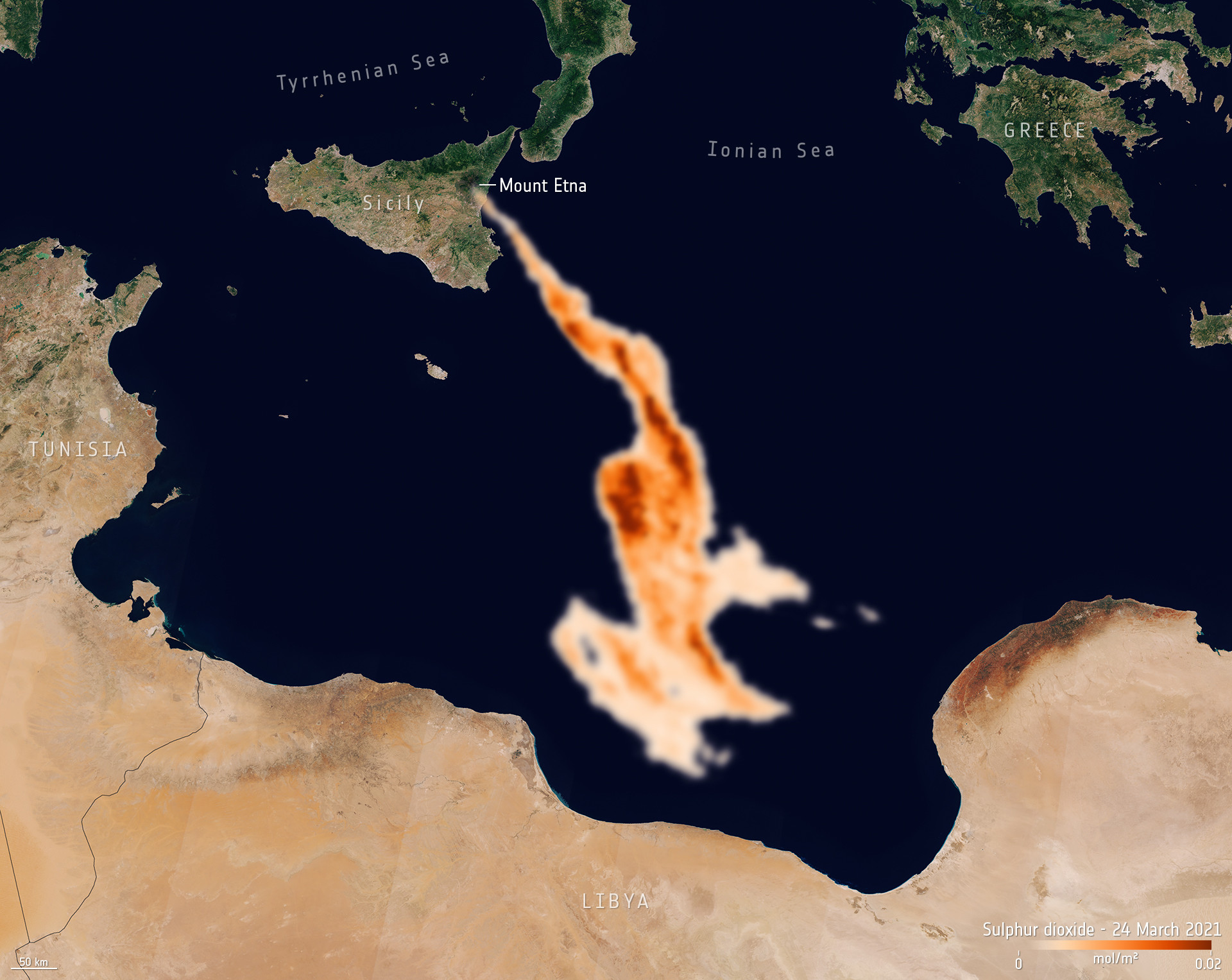 From one Italian volcano to another! Stromboli a volcano in the Aeolian Islands north of Sicily, erupted on 19 May. The eruption caused a high column of ash and a strong outflow of lava. The lava flow poured down towards the sea on the Sciara del Fuoco, a desertic area of the island. As shown in this image acquired by Sentinel-2, the lava flow was still flowing three days after the start of this new eruptive phase. 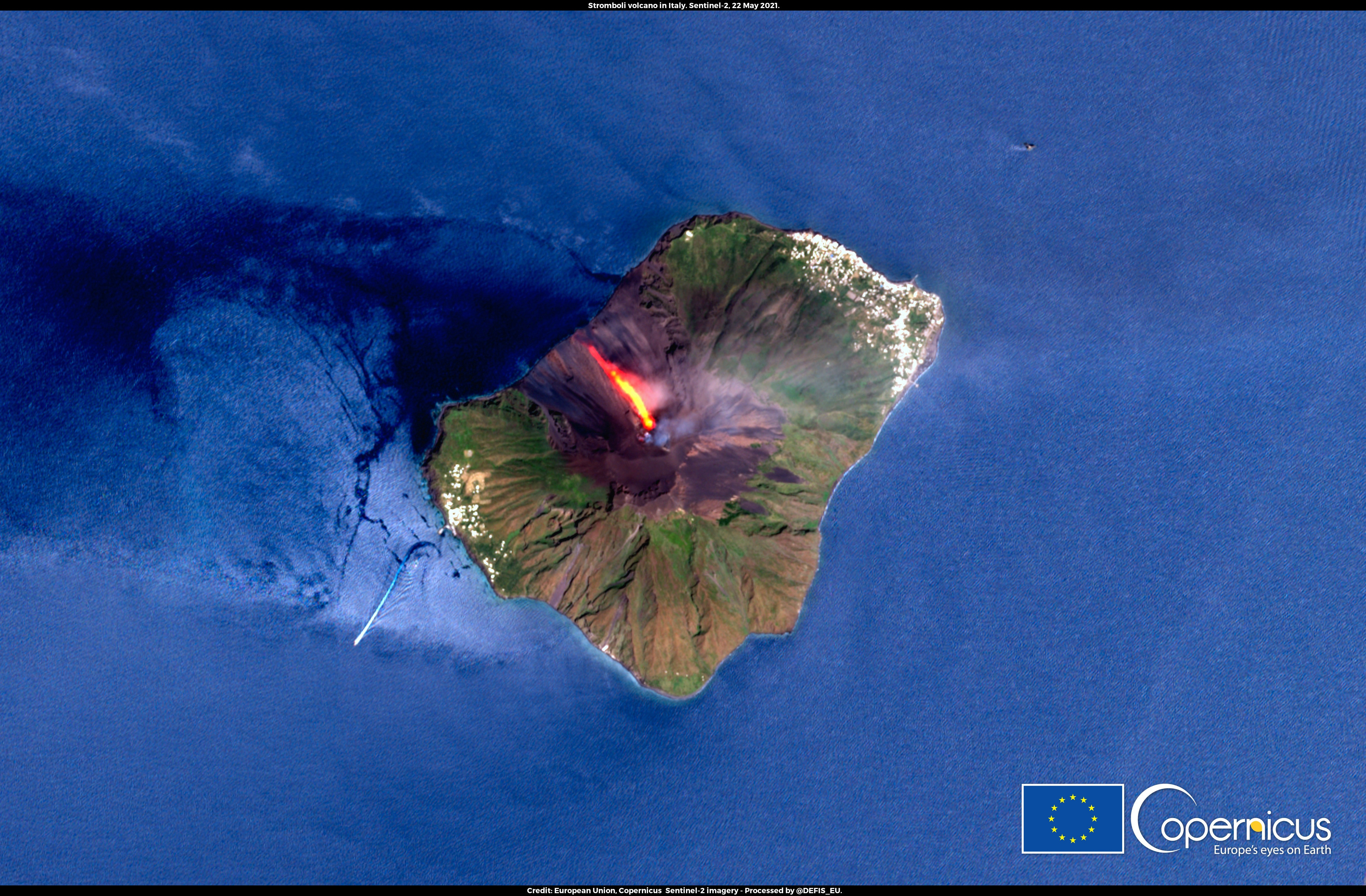 Just a few weeks later a Saharan dust plume crossed the Mediterranean en route towards Northern Europe. The dust cloud, which was swept off Africa by strong winds swirling across the deserts of Mali and Mauritania, reached all the way to Scandinavia and the Baltic States. 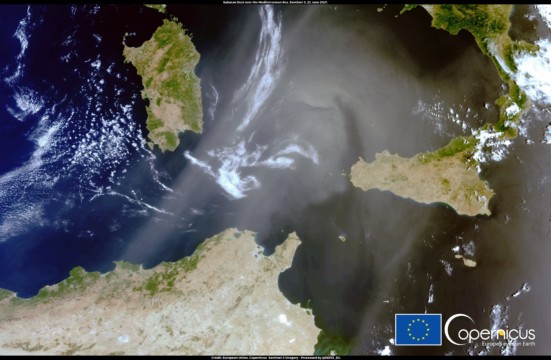 This image was acquired by one of the Copernicus Sentinel-3 satellites on 22 June 2021. The Copernicus Atmosphere Monitoring Service (CAMS) monitors and forecasts air quality on a global scale, assessing the concentration and dispersion of atmospheric pollutants and aerosols.

Record rainfall caused swollen rivers to burst their banks and wash away homes and other buildings in western Europe. The radar image below uses information from two separate acquisitions captured by the Sentinel-1 mission on 3 July and 15 July 2021, and it shows the extent of the flooding in red.

Radar images acquired before and after flooding disasters offer immediate information on the extent of inundation and have proved useful in monitoring floods, thanks to Sentinel-1’s ability to ‘see’ through clouds and rain. The mission has been supplying imagery through the Copernicus Emergency Mapping Service to aid relief efforts. The devastating floods triggered four activations in the Copernicus Emergency Mapping Service, in Western Germany, Belgium, Switzerland and the Netherlands. 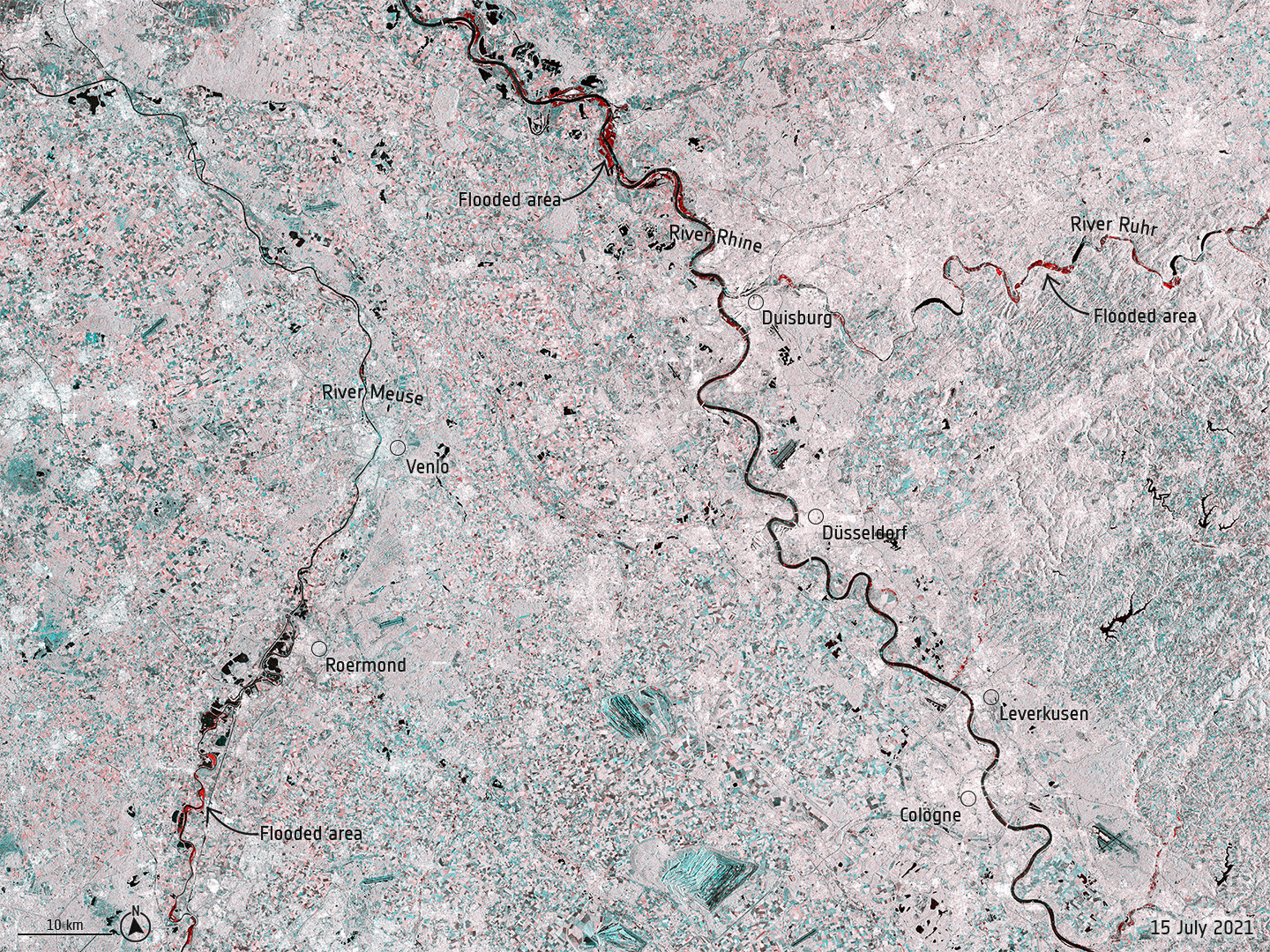 Parts of the Mediterranean and central Europe experienced extreme temperatures last summer with wildfires causing devastation in both Turkey and Greece. 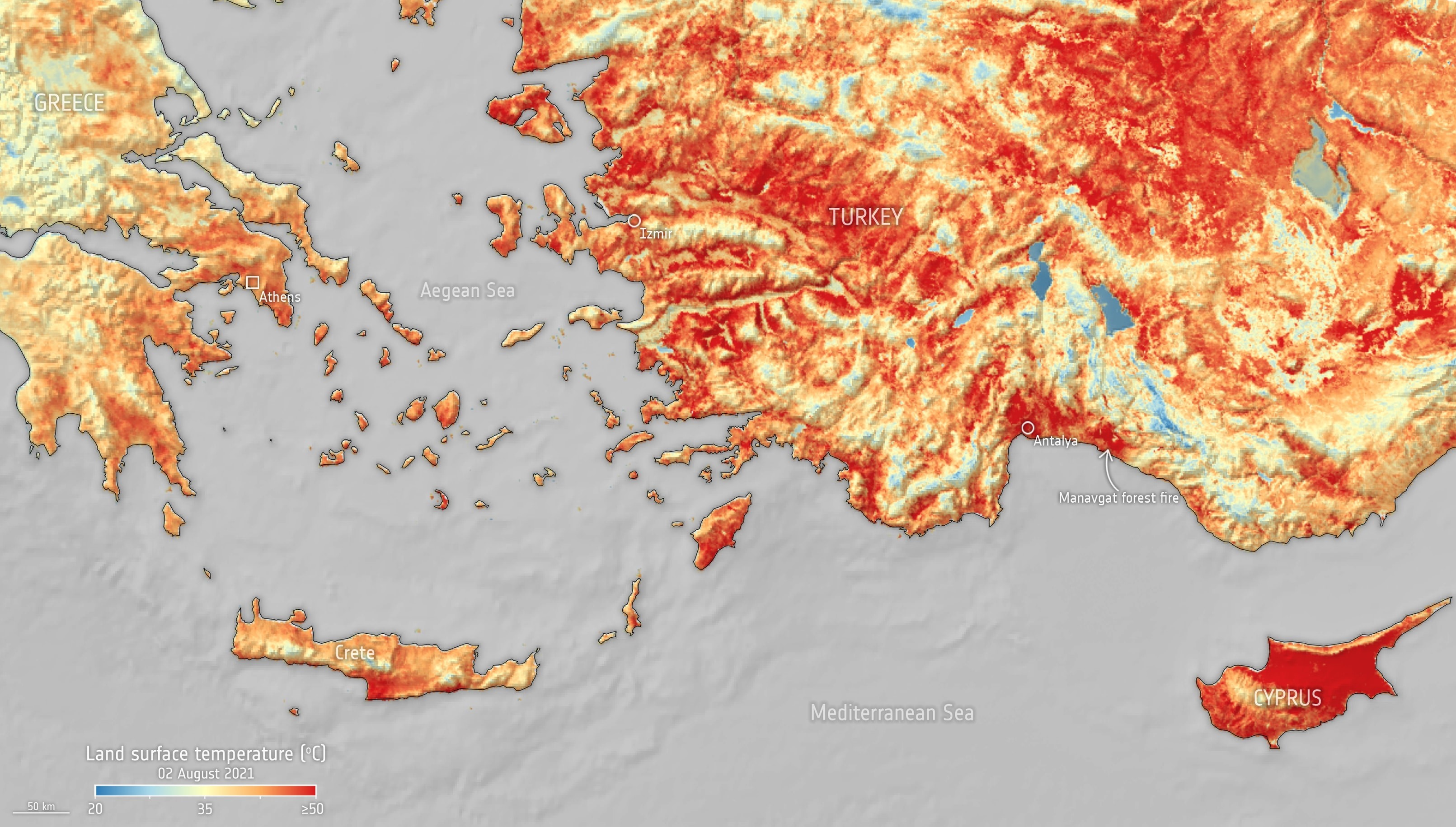 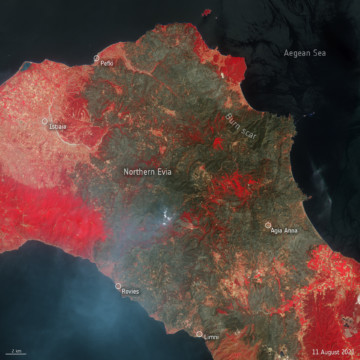 The map above, generated using data from Copernicus Sentinel-3’s Sea and Land Surface Temperature Radiometer, shows the temperature of the land surface on 2 August 2021. In some parts of Turkey and Cyprus, the surface temperature reached over 50°C. The image here on the right is a false-colour Copernicus Sentinel-2 image of Evia, Greece’s second-largest island, captured on 11 August 2021. It has been processed in a way that includes the near-infrared channel which is usually used to highlight vegetation (visible in bright red). The image shows the extent of the burned area (visible in shades of brown and green) in the northern part of the island.

The images below, captured by the Copernicus Sentinel-2 mission on 30 September and 10 October 2021, show the flow of lava from the volcano erupting on the Spanish island of La Palma. The cascade of lava can be seen spilling into the Atlantic Ocean, extending the size of the coastline. 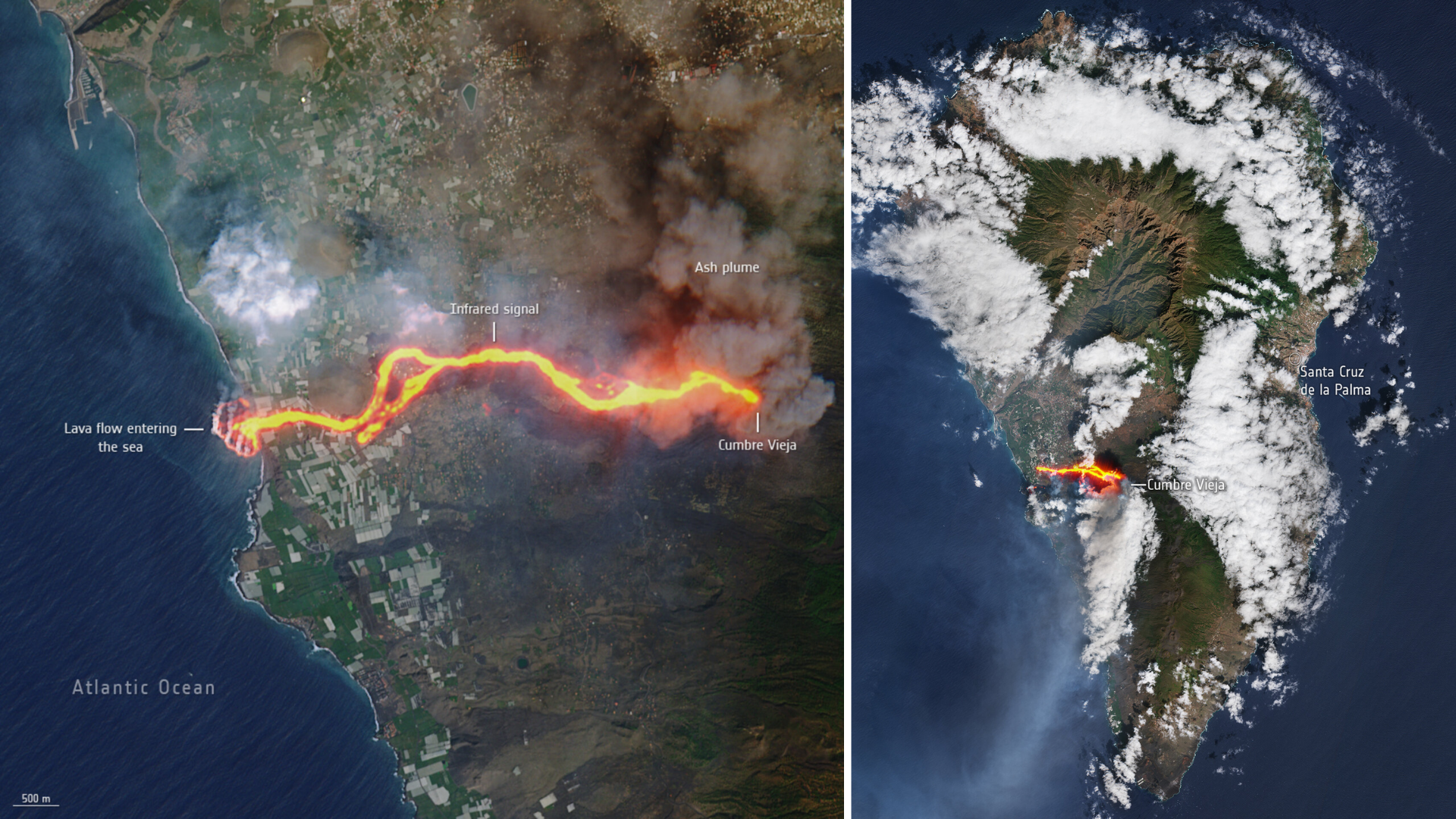 Washington under state of emergency

In November 2021, severe wind and rain led to extensive flooding in parts of the United States. The extreme weather was caused by an atmospheric river, a huge plume of moisture extending over the Pacific and into Washington.

The first image captured by the Copernicus Sentinel-2 mission shows the extent of the floods in the Nooksack River, which spilled over its banks and washed out several roads in the process. The radar image on the right uses information from two separate acquisitions captured by the Copernicus Sentinel-1 mission on 4 November and 16 November 2021 and shows the extent of the flooding of the Nooksack River in dark blue. Radar images acquired before and after flooding events offer immediate information on the extent of inundation, thanks to Sentinel-1’s ability to ‘see’ through clouds and rain. 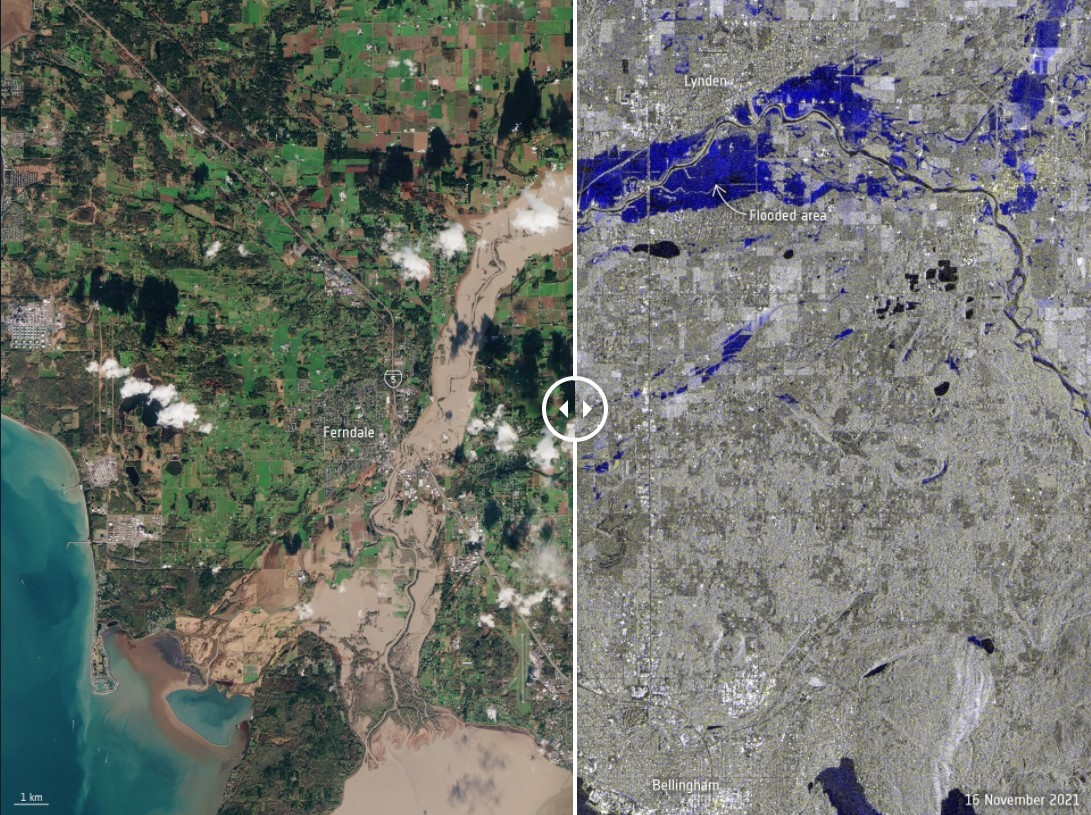 On 6 December 2021, a “Kona Low” storm system landed on Hawaii’s shores. During the storm, the lowest temperatures in 56 years were recorded in the archipelago, as well as heavy rain and snowfall. 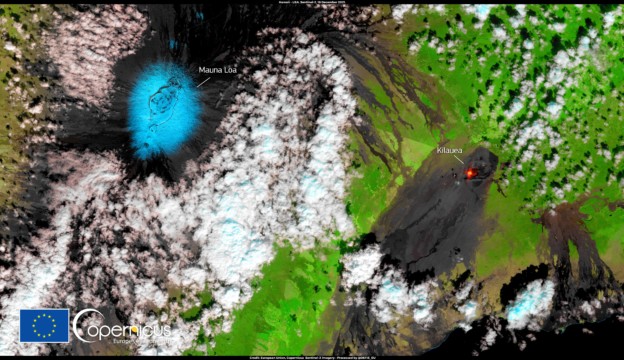 This false-colour image, acquired on 18 December by one of the Copernicus Sentinel-2 satellites, shows the Mauna Loa volcano’s summit covered in snow, all set for a white Christmas!