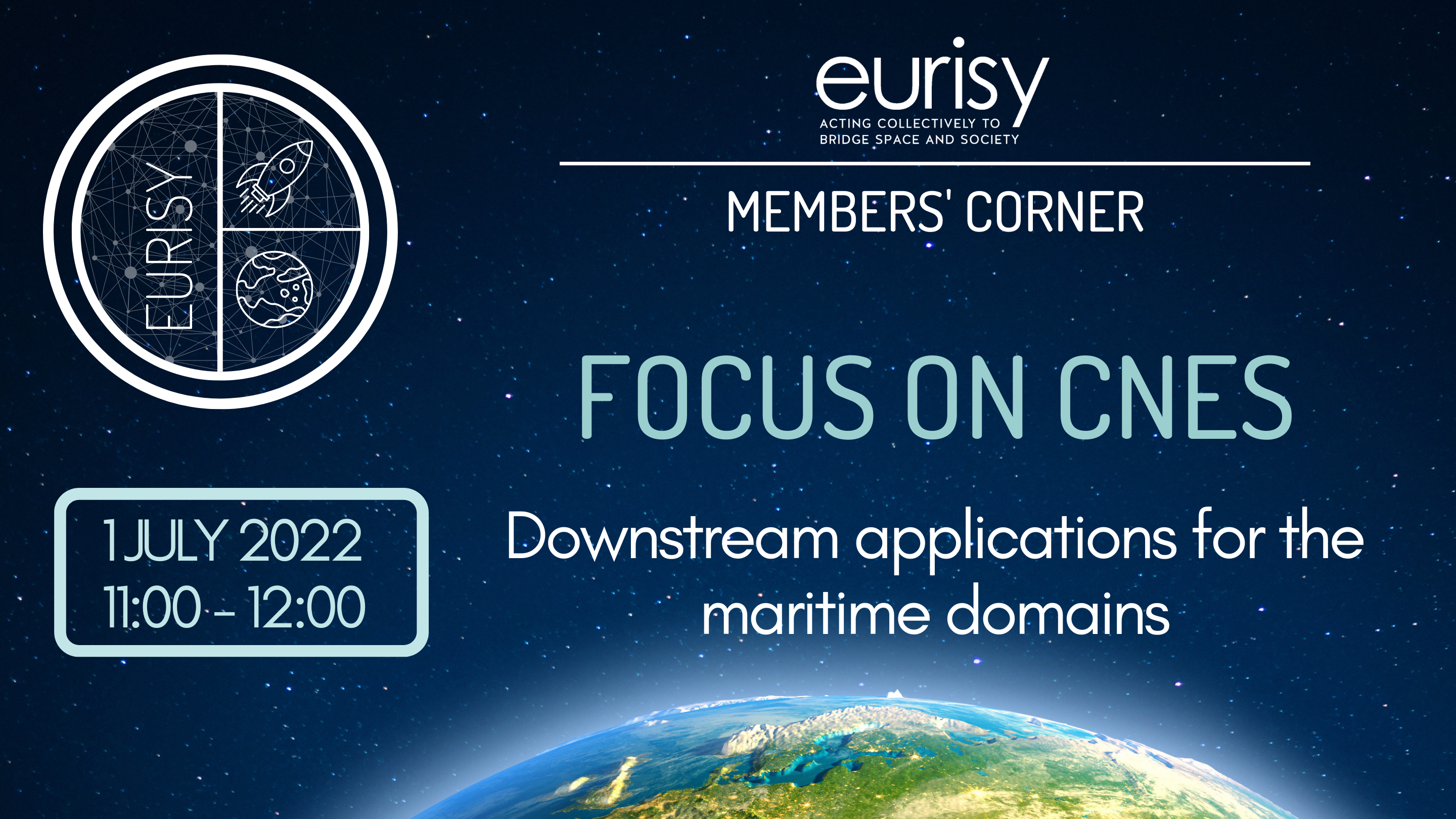 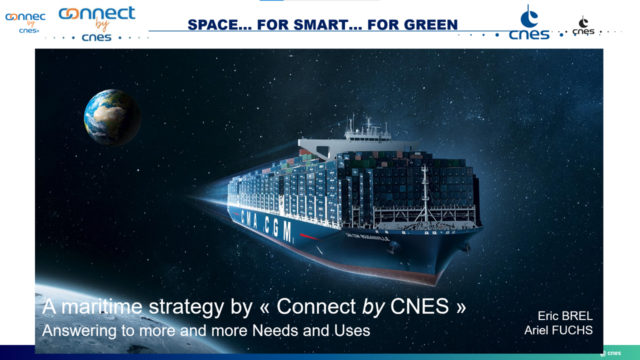 Space applications can transform the maritime domains, by providing data and information that will foster a sustainable blue economy, and help protecting the ocean and preserving its resources. CNES wants to be at the forefront of the creation of a global “Sea & Space” strategy that federates public and private stakeholders to put science at the service of society.

The 4th episode of the Eurisy Members’ Corner series was animated by Ariel Fucks, heading the maritime strategy of the Connect by CNES programme.

Mr Fucks virtually participated from Lisbon, on the last day of the UN Ocean Conference, this year dedicated to the theme “Scaling up ocean action based on science and innovation for the implementation of Goal 14: stocktaking, partnerships and solutions.”

Following the directions of the French government, CNES works with public and private actors to implement innovation strategies in some key sectors of the national economy. These include the monitoring and protection of the environment, the promotion of smart mobility and of a sustainable agriculture, and the strengthening of maritime activities that preserve the natural environment, among others. 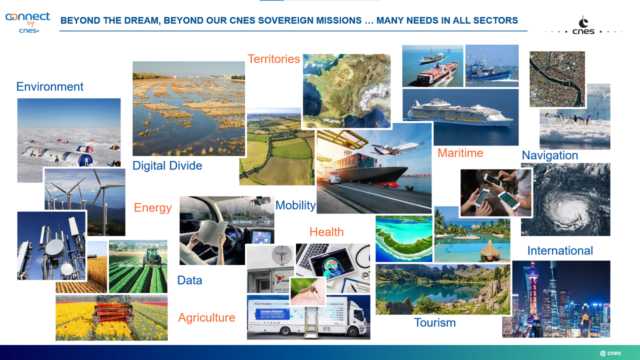 To reach out to organisations outside the space sector, CNES has launched the Connect-by-CNES programme, which aims to open up the potential of space technologies and solutions to the entire national economy. 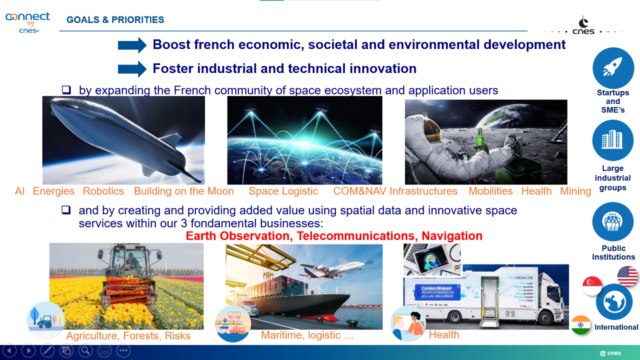 At the international level, CNES collaborates on programmes aimed at enhancing the use of space applications with a number of organisations, including European institutions, other national governments (such as the USA, Singapore, India, and Australia), and international organisations. 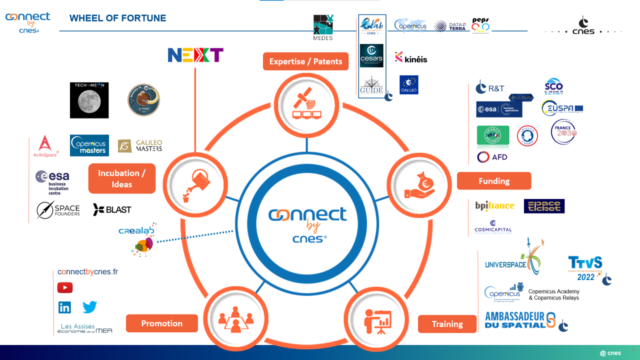 The Space Climate Observatory is an international initiative proposed by France in 2019 to support the emergence of operational tools for climate monitoring, mitigation and adaptation, addressed to decision-makers and the wide public. CNES is the entity in charge of implementing the SCO in France and of inspiring the implementation of similar models in other countries.

The SCO France is managed by a committee made up of 22 French public entities operating in the field of climate action, including the Ministry of Higher Education and Research and the Ministry of Ecological Transition and Solidarity. 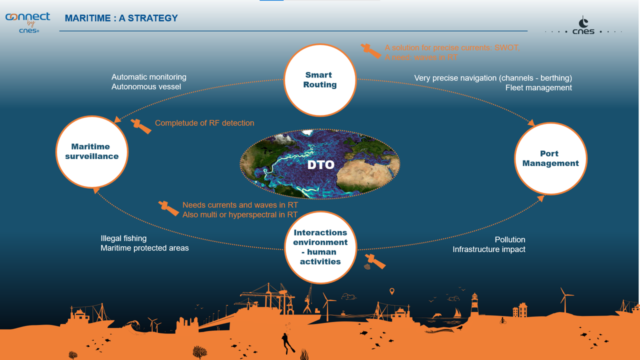 To use scientific advancements to monitor and protect the seas and the ocean, CNES has a strategy based on four pillars: smart routing, maritime surveillance, port management, and ecosystem surveillance.

Smart routing is today flourishing, with a lot of efforts being put into the development of next generation automated navigation systems. These not only rely on satellite navigation for positioning, but also on satellite remote sensing for data on sea currents, weather, and winds, to allow sailors to choose the routes that will require the least amount of energy.

Watch the video by Eurisy and CNES on the use of Copernicus data made by a French SME to reduce the carbon footprint of ships:

Maritime surveillance is profiting from scientific advancements to better monitor protected areas and fight illegal fishing, which represents a major threat to biodiversity and to the economic sustainability of fishery. Images from satellites and data collected through in-situ observations (geolocated thanks to satellite navigation) provide a big amount of reliable information on the status of our seas and environments. Coastal authorities rely on satellite navigation to monitor illegal fishery, while new apps are being created that use data from satellite imagery to know where to fish and satellite navigation signals to track the position of fishermen at sea. 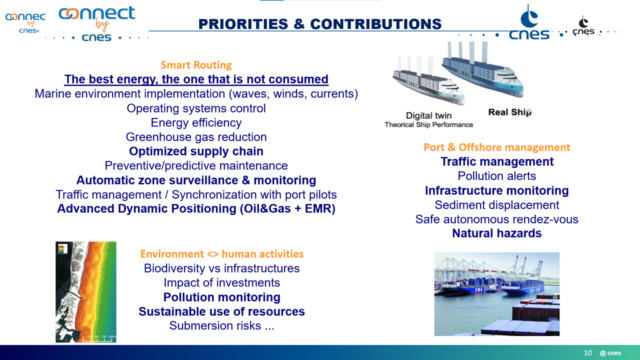 Interactions between the environment and human activities can also be assessed and monitored by using satellite data. As an example, satellites provide data useful to capture and monitor environmental parameters within and around ports, which can be particularly useful during port infrastructure works.

Watch the video realised by Eurisy and CNES on the use of Copernicus data during the enlargement works in the harbour of Port-la-Nouvelle, in southern France:

CNES has a continuous dialogue with public and private organisations in the maritime domains on ways to foster the development and use of services based on satellite data and signals.

Collaboration with external entities is key for CNES to decide on its strategic orientations, to understand the needs of public and private organisations operating in the maritime sector that could benefit from satellite-based data and signals, and to create common endeavours for the development of services more and more adapted to the operational needs of those working in sectors linked to the seas and the oceans. 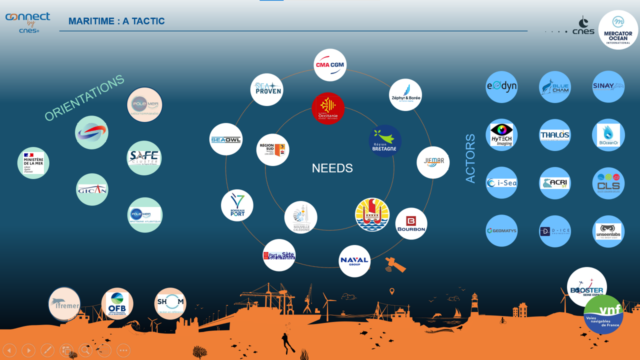 The Copernicus Earth observation programme plays a major role in enabling such collaborations, providing a huge amount of free and open data that we can use to monitor the oceans. 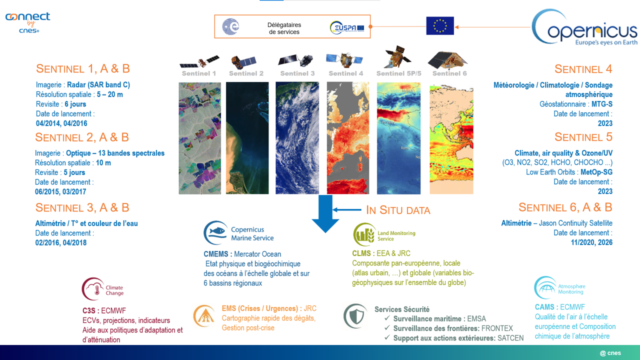 Mercator Ocean, the entity currently in charge of implementing the Copernicus Marine Monitoring Service has recently become international, to better serve the needs of the EC for data providing and data processing, also in view of the implementation of the digital twin of the ocean, a scientific tool that is really meant to meet concrete needs of actors operating in the maritime domains.

In this context, Eurisy participates to the consortium implementing the Iliad project (Integrated digital framework for comprehensive maritime data and information services), that aims to establish an interoperable, data-intensive, and cost-effective Digital Twin of the Ocean (DTO).

Freshly returned from the Euromaritime congress held in Marseille on 28-30 June, where Eurisy and CNES coorganised a roundtable on space solutions for a sustainable Blue Economy, Alessandra Vernile, from the Eurisy secretariat, confirmed the clear interest of the French space community to activate scientific discoveries to the profit of the maritime sector, and of the great interest of the maritime community towards satellite applications tracking ships and containers. 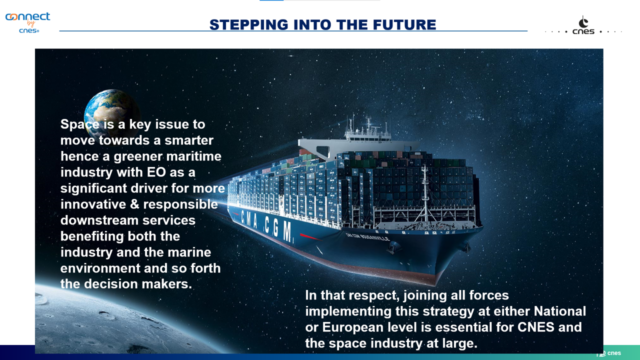 Several examples of how satellite data can sustain the blue economy while contributing to safeguarding the oceans can be found in the new edition of the Eurisy periodical publication Satellites Going Local dedicated to the maritime domains.

If you are in Paris, you might be interested in attending the 1ʳᵉ edition of the “Assises du NewSpace”, taking place on July 7 and 8 at Station F. The event has the dual objective of establishing a state of the art of the NewSpace market in France, and of drawing together growth prospects to structure and consolidate a French NewSpace, in view of promoting it internationally within five years.

To know more about the activities of CNES visit: https://cnes.fr/en

The presentation of the webinar is available here: Presentation-ConnectbyCNES eurisy

Stay tuned for the next webinar of the Eurisy Members’ Corner that will be hosted by the Malta Council for Science and Technology (MCST) on the 16th of September 2022 between 11:00 AM and 12:00 AM CET.