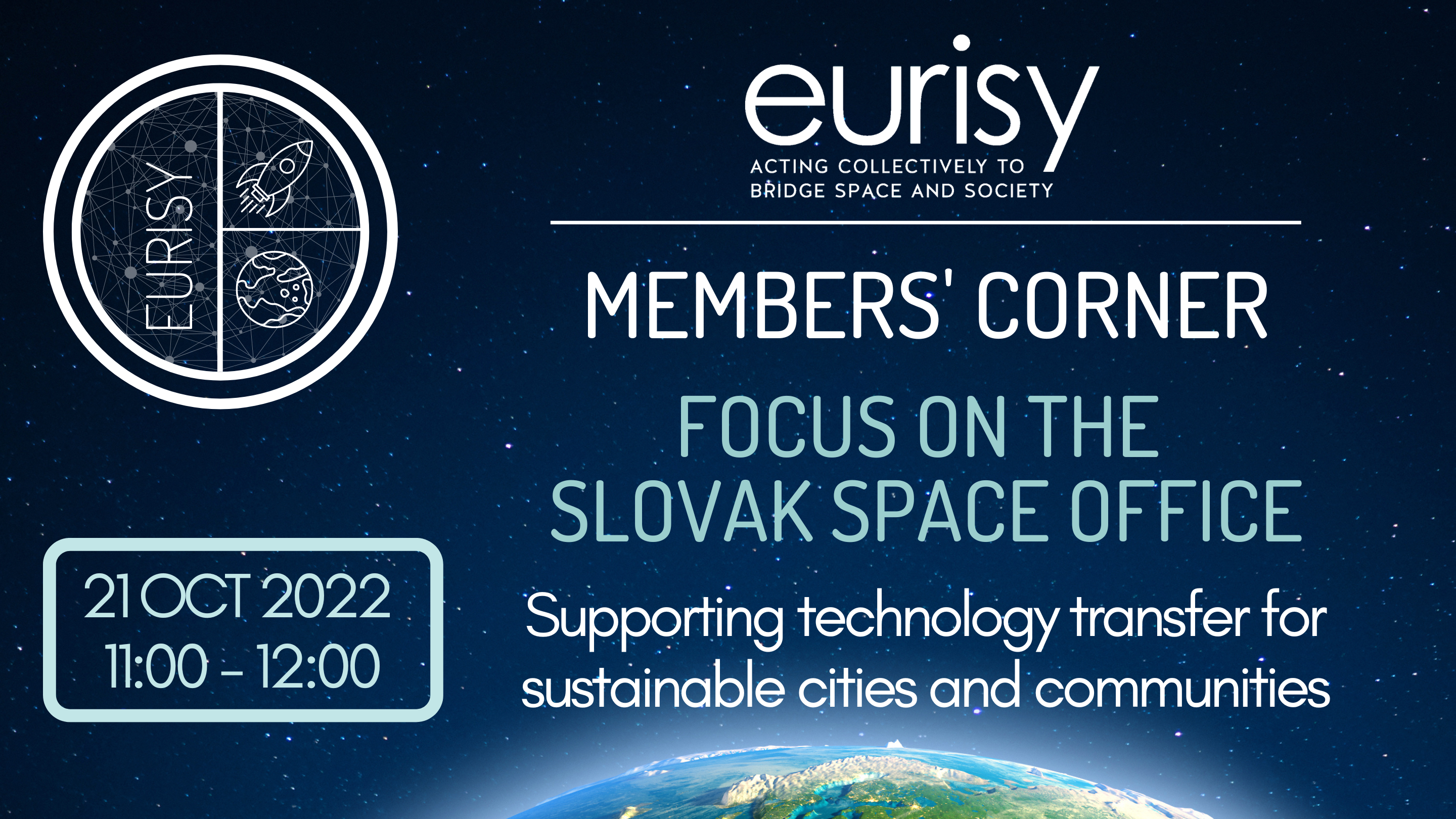 As the newest associate member of the European Space Agency, the Slovak Space Office intends to leverage on international opportunities to boost the development and use of space-based services locally. 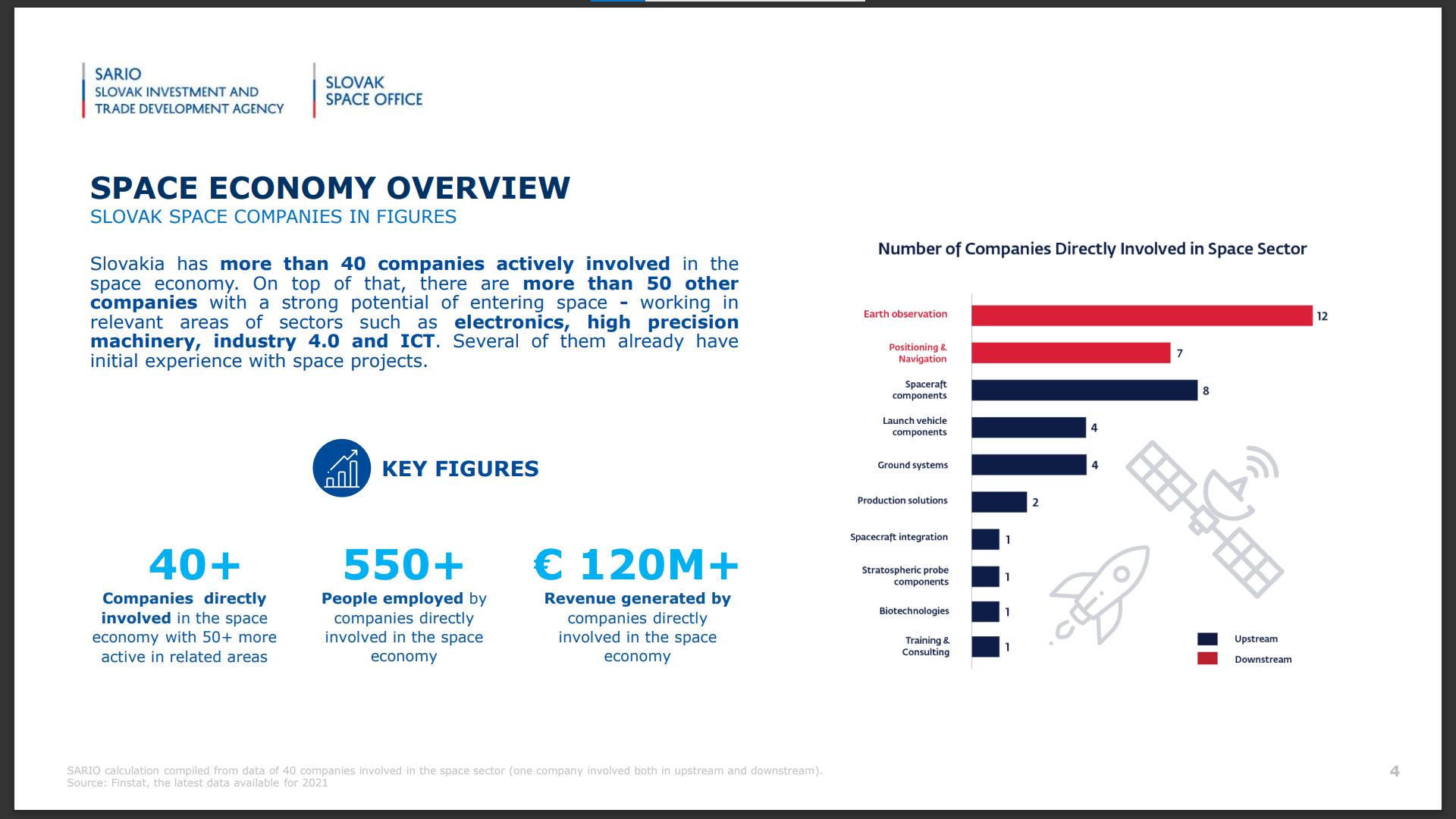 After the Members’ Corner webinar organised on the issue of space-based services for the transport sector in May 2022, the Slovak Space Office hosted a new webinar of the series, this time focused on their activities to stimulate the use of satellite data and services to build sustainable cities and communities.

Despite being a relatively small country, Slovakia has a vibrant space ecosystem, including private space tech companies, R&D institutions, and companies operating in spin-in technologies (such as electronics and ITC).

After becoming the newest associate member of the European Space Agency, the Slovak Space Office prepares to select new additional programmes within the organisation, and to leverage on its fast-growing downstream ecosystem to stimulate the participation of local entities to Horizon Europe projects. 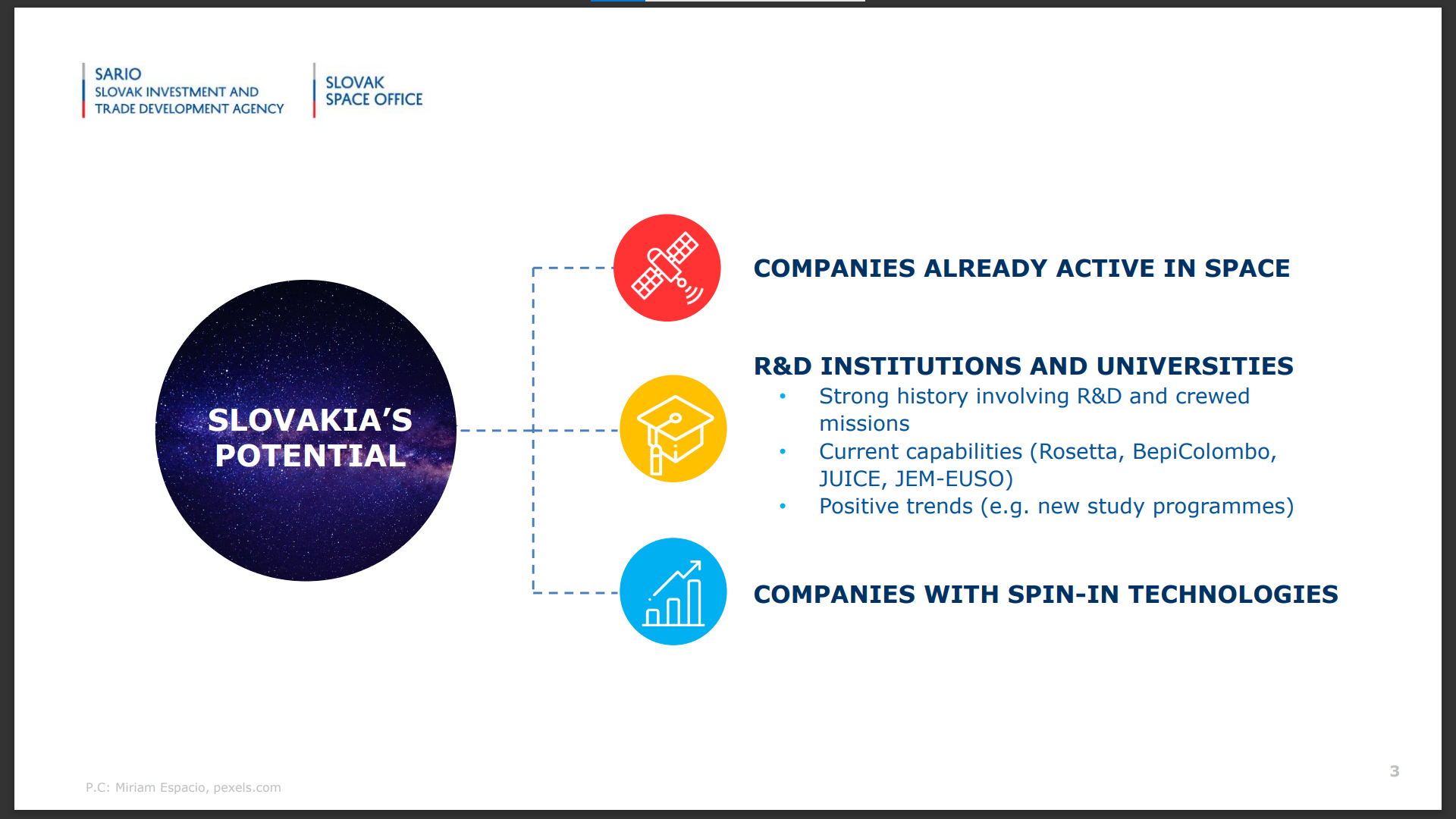 Michal Brichta, leading the Industry Branch of the Slovak Space Office, introduced the audience to the activities and the mission of the newly established national space agency, created one year ago by merging the Space Policy Unit of the Ministry of Education, Science, Research and Sports and the Space Industry Unit of the Investment and Trade Development Agency of Slovakia (SARIO).

The SSO currently supports 20 project partnerships, resulting from inter-institutional as well as international cooperations. Both locally and internationally, the SSO also supports discussions on the democratisation of space, working to ensure that all countries and all people can benefit from space research and applications.

Furthermore, the SSO operates to raise the awareness of such benefits of private and public entities, and to build skills for the future generations.

To this end, the SSO organises the “Emerging Space” staple event, which next edition will be held on May 3rd 2023, and it has been hosting a Cassini Hackathon in 2021. In November 2022, the SSO will also contribute to ActInSpace, an international innovation contest uniting over 100 cities across 50 countries, open to everyone. 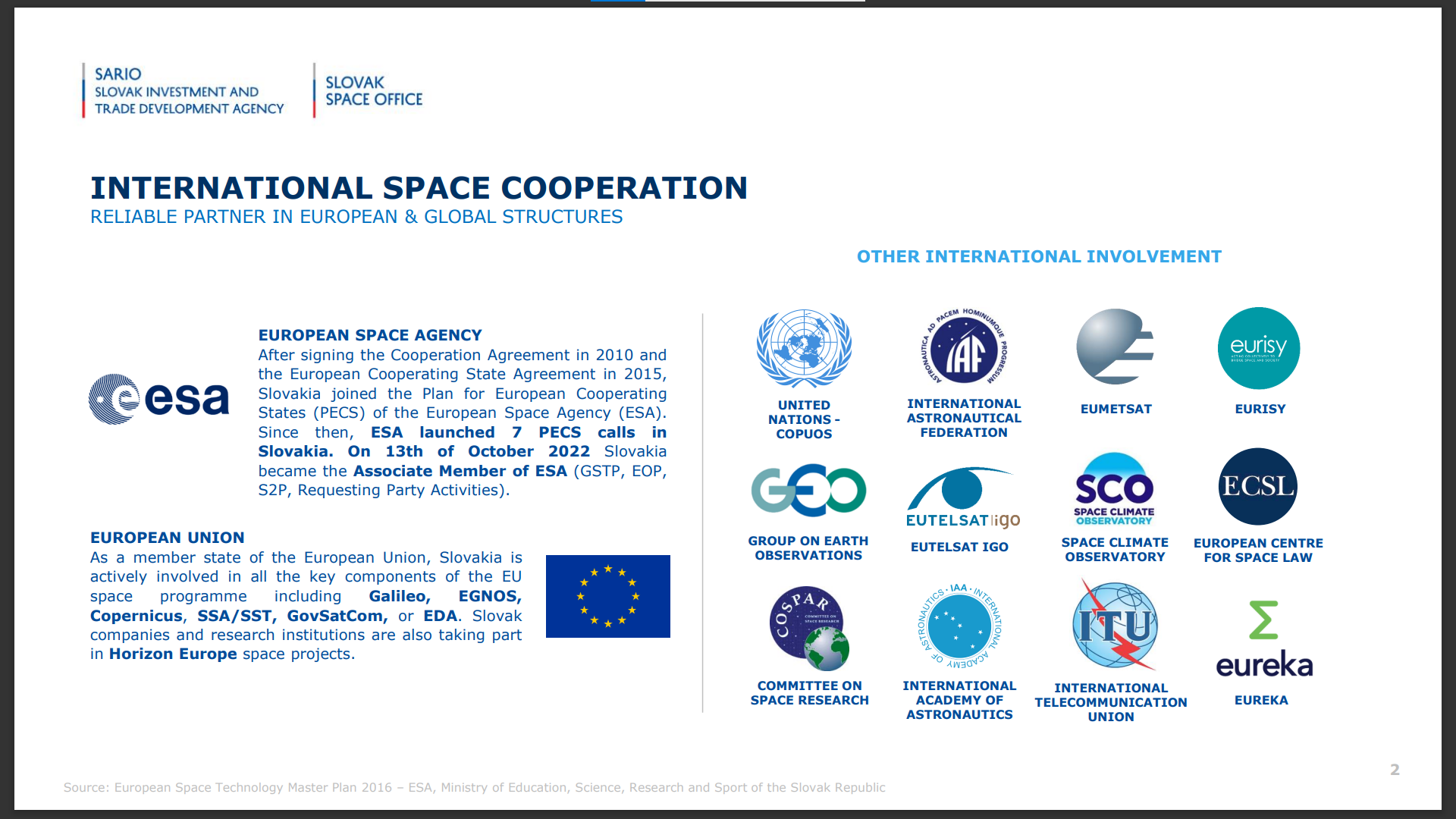 For this 6th webinar of the Eurisy Members’ Corner series, the Slovak Space office selected three examples of use of satellite data to increase quality of life in urban aeras. 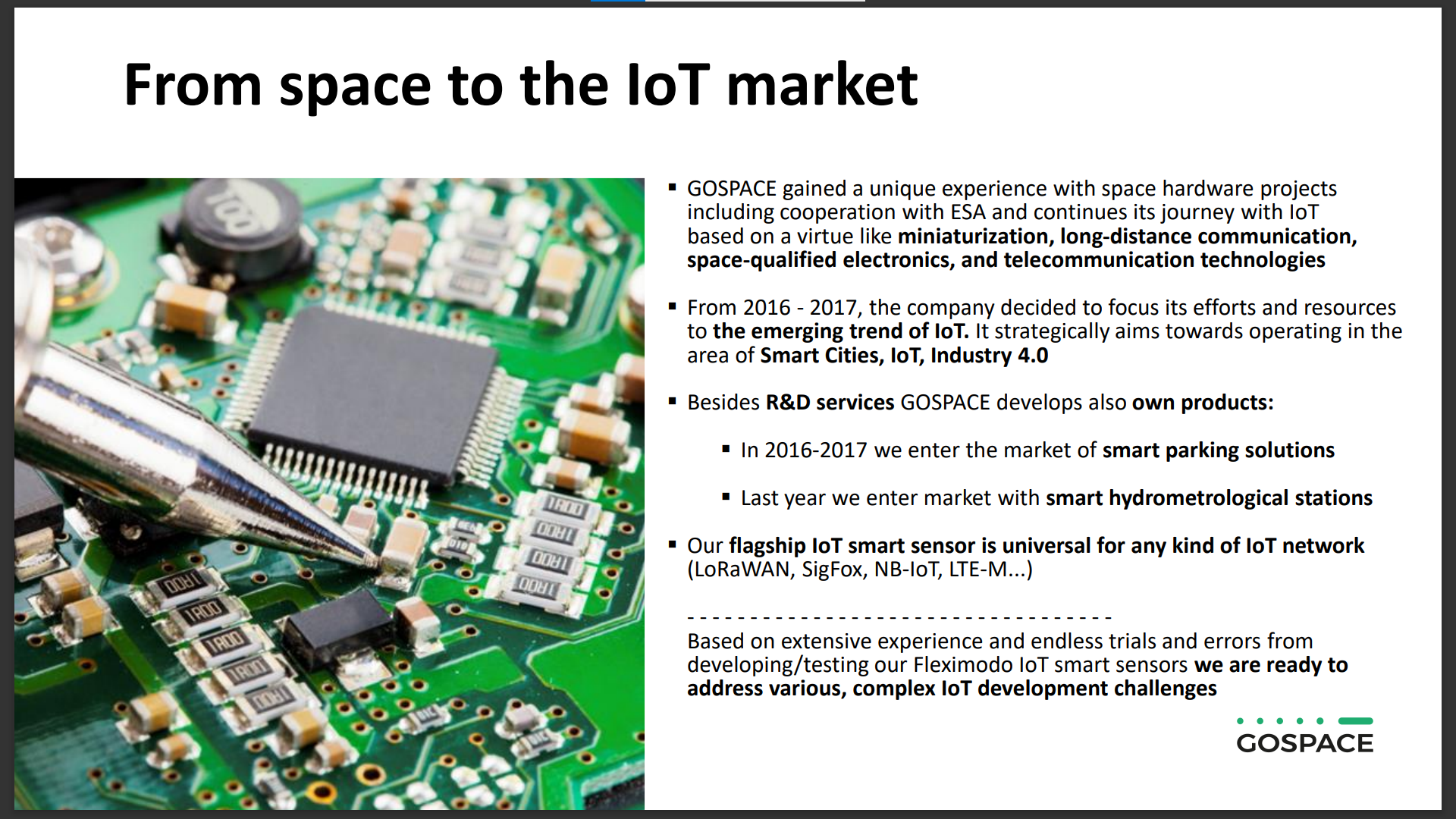 The first example was presented by Alex Kutka, from Gospace Tech s.r.o. Initially focused on upstream space activities, since 2016 Gospace made its mission to “bring rocket science into urban challenges”.

Since then, the company developed a smart parking solution and a smart hydrometeorological station monitoring system, both using data from satellites.

This second service was developed to enable city authorities to intervene rapidly in the event of a rise of the Danube River in Bratislava. The system allows for the automatic monitoring of water levels and it includes a mobile app that alerts authorities and citizens via email and SMS.

The system is based on a small sensor (match.com), the size of a cup of tea, connected through a wireless satellite connection and equipped with a battery that can last for at least 5 years. Thanks to the satellite connection, the measurements of the sensor can be communicated to a control unit over a distance up to 700 kilometres. 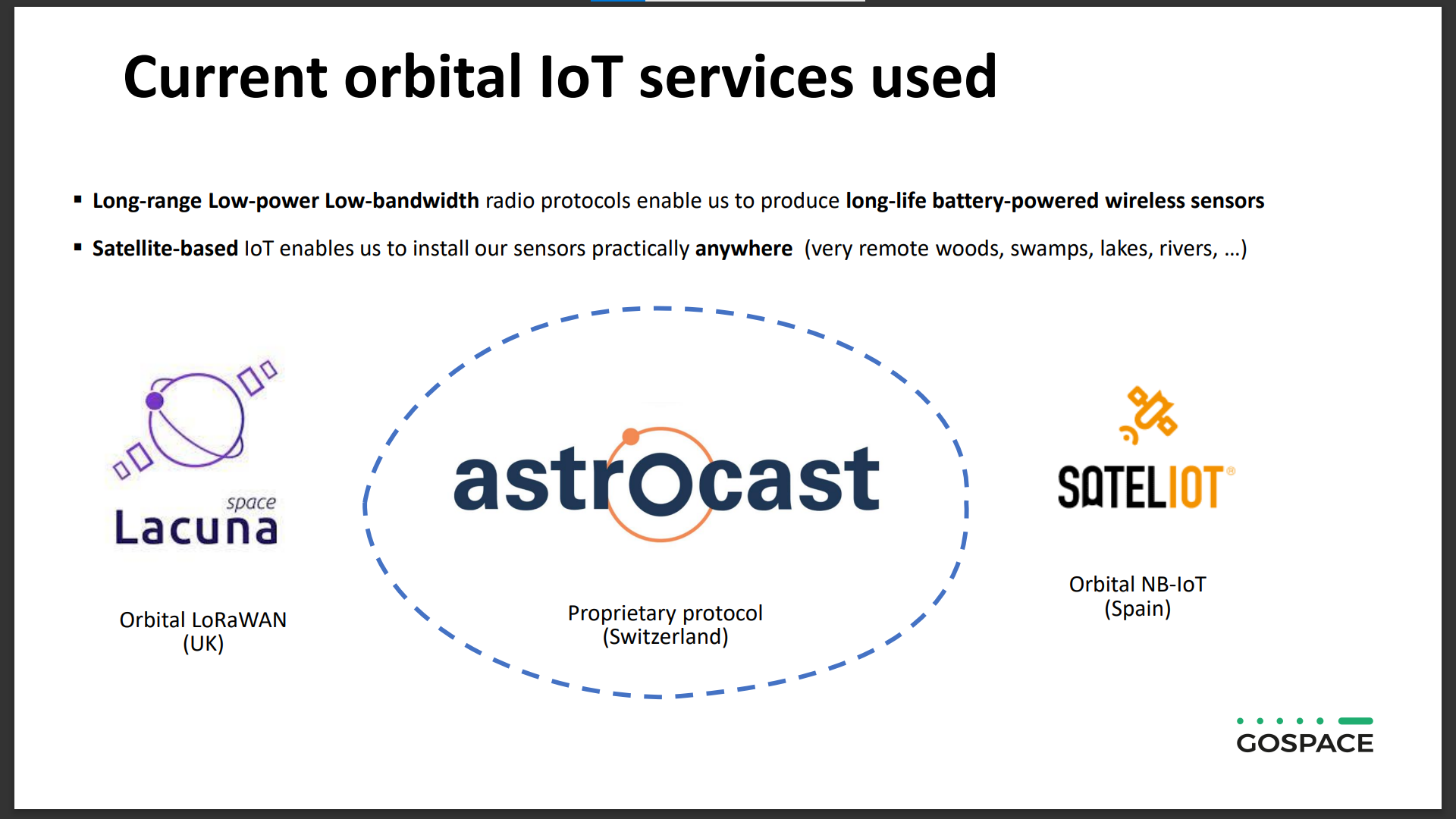 This system allows for the monitoring of water pumps, water reservoirs, waste waters, and river levels also in remote locations, and even underground. 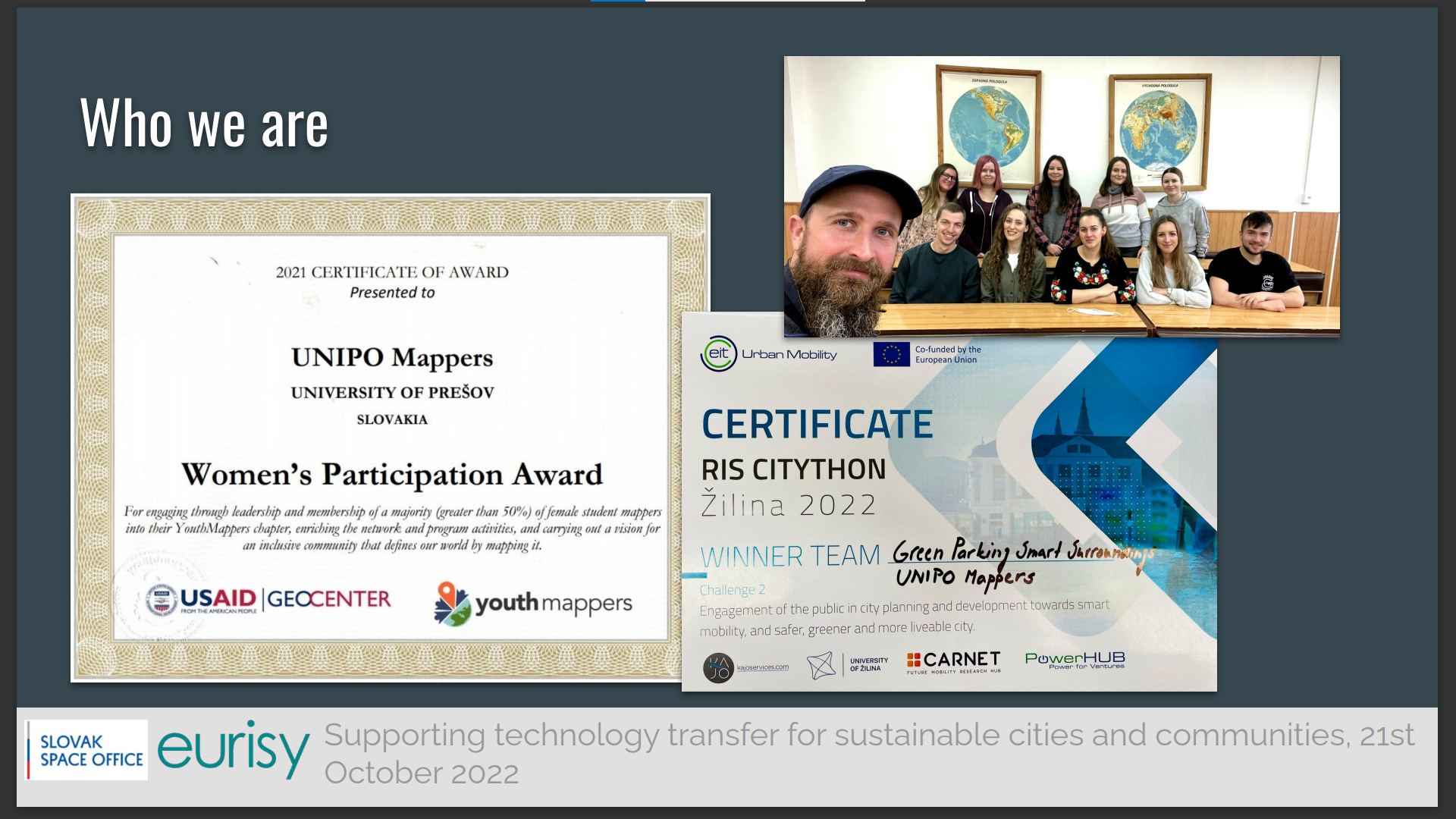 Following the presentation of the services of Gospace, the webinar showcased the experience of the University of Prešov (UNIPO) using satellite data to come up with innovative urban solutions based on citizen science.

Since 2020, Mr Miloslav Michalko is one of the two mentors of a group of self-organised students who are passionate about the potential of crowd mapping. The group is part of an international community of humanitarian mappers, that got inspired by the role played by satellites to enable mapping and post-disaster intervention in Haiti in 2010. 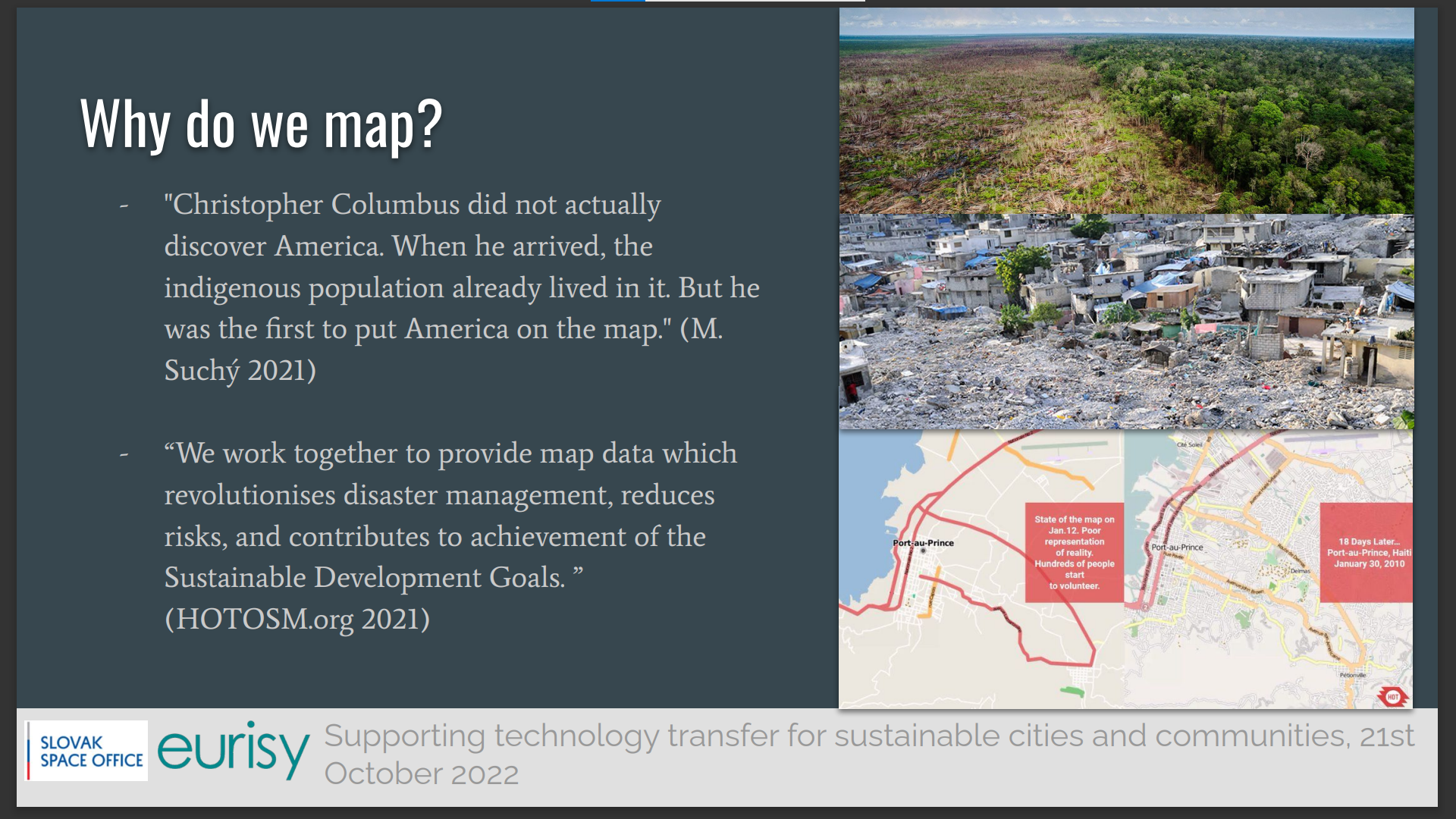 At UNIPO, they acknowledge the power of the crowds to use satellite imagery to map roads, trails, cafes, train stations and much more around the world, as it happens in OpenStreetMap (OSM) under an open license. 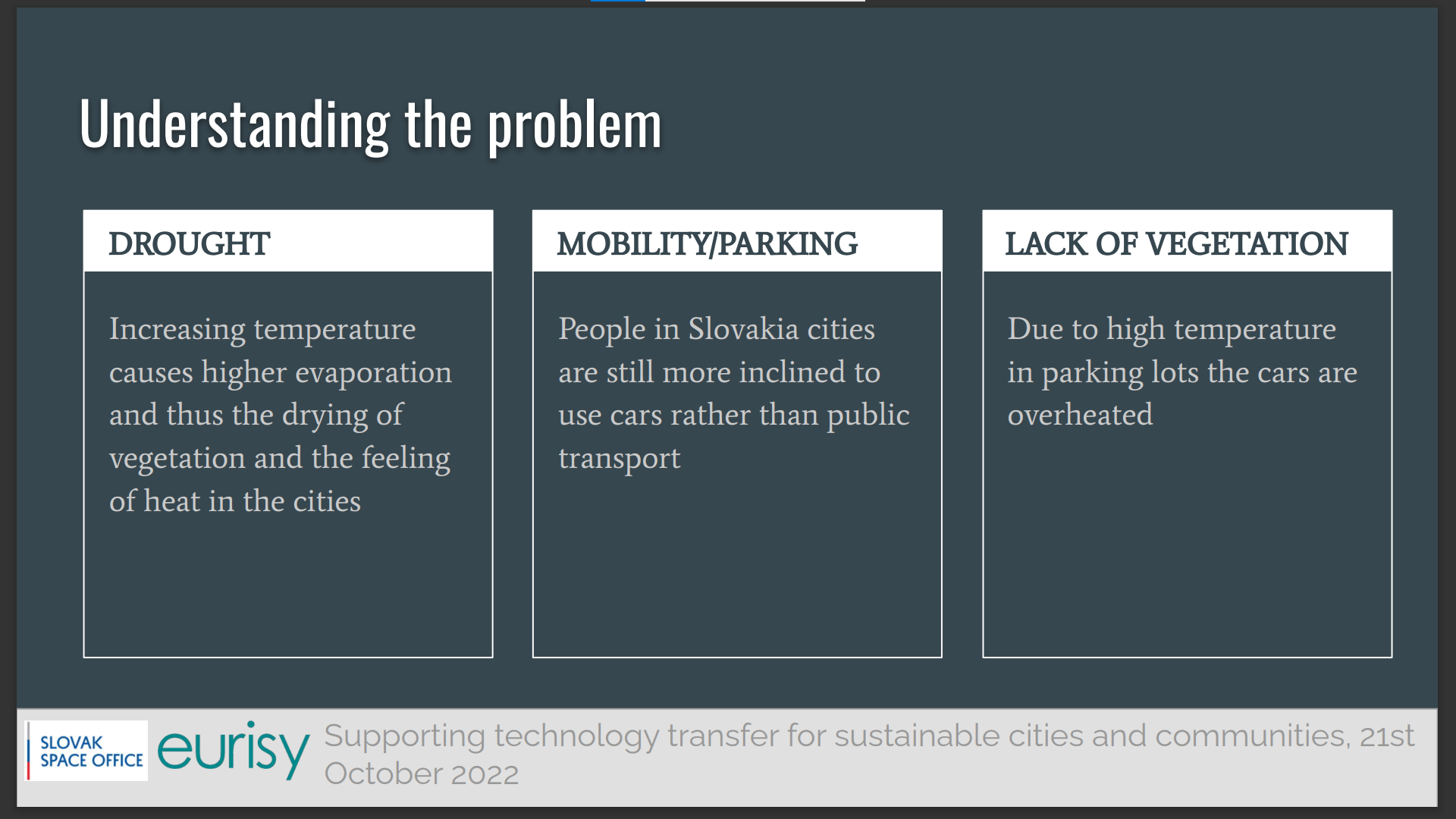 In 2022, the UNIPO team won a citython co-funded by the European Union with the “Green Parking Smart Surrounding” app. Since temperatures in cities are increasing, the team wanted to provide people with an app allowing to monitor temperatures in parking areas and to take measures to cool down the air there. 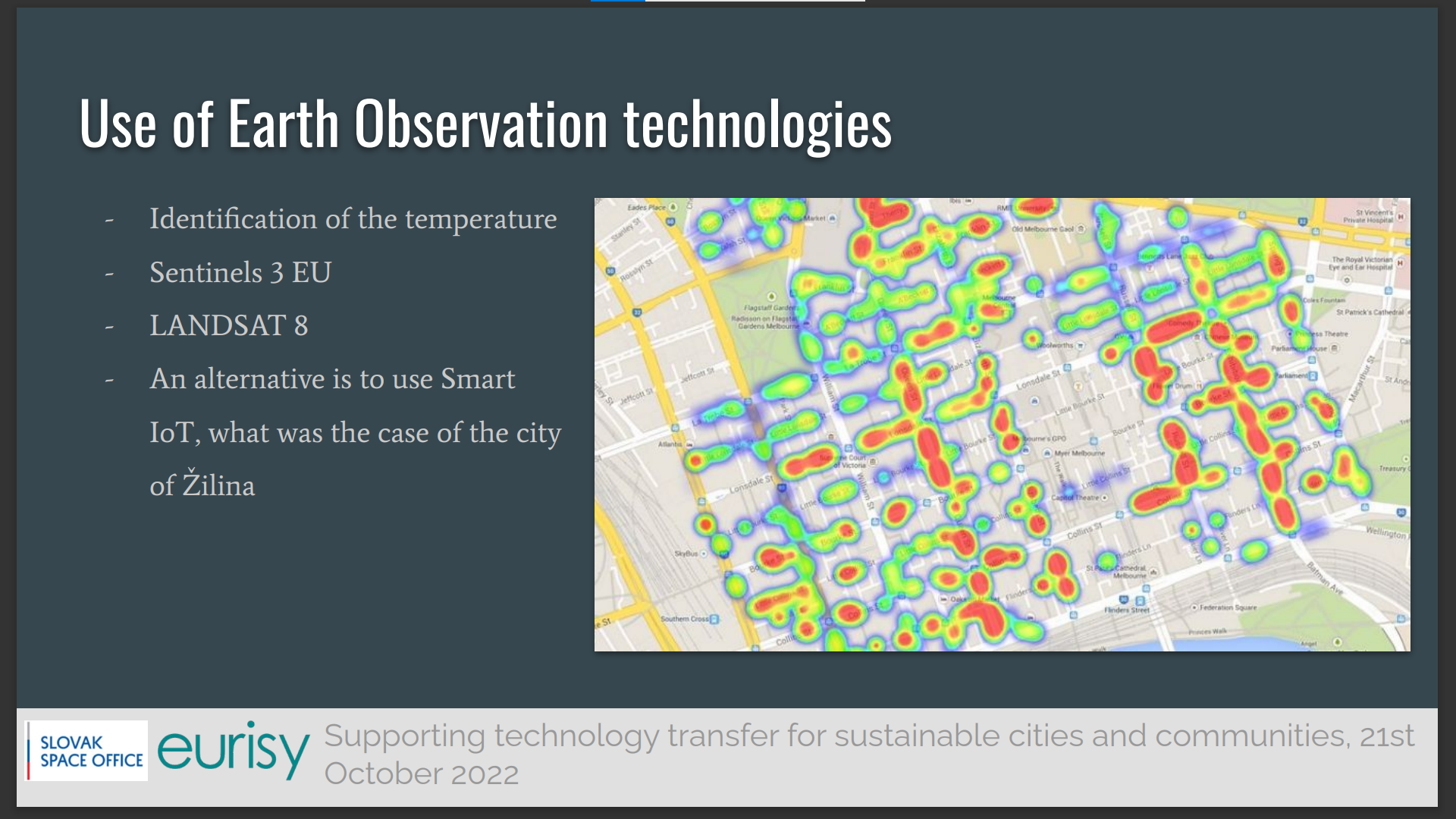 The app relies on satellite data from Sentinel-2 and Landsat to identify the hot spots. Based on the analysis of the data, the team proposed measures to cool the air around parking spots, for example by adding natural shadowing and installing solar panels, which potential output is also calculated by using satellite data. 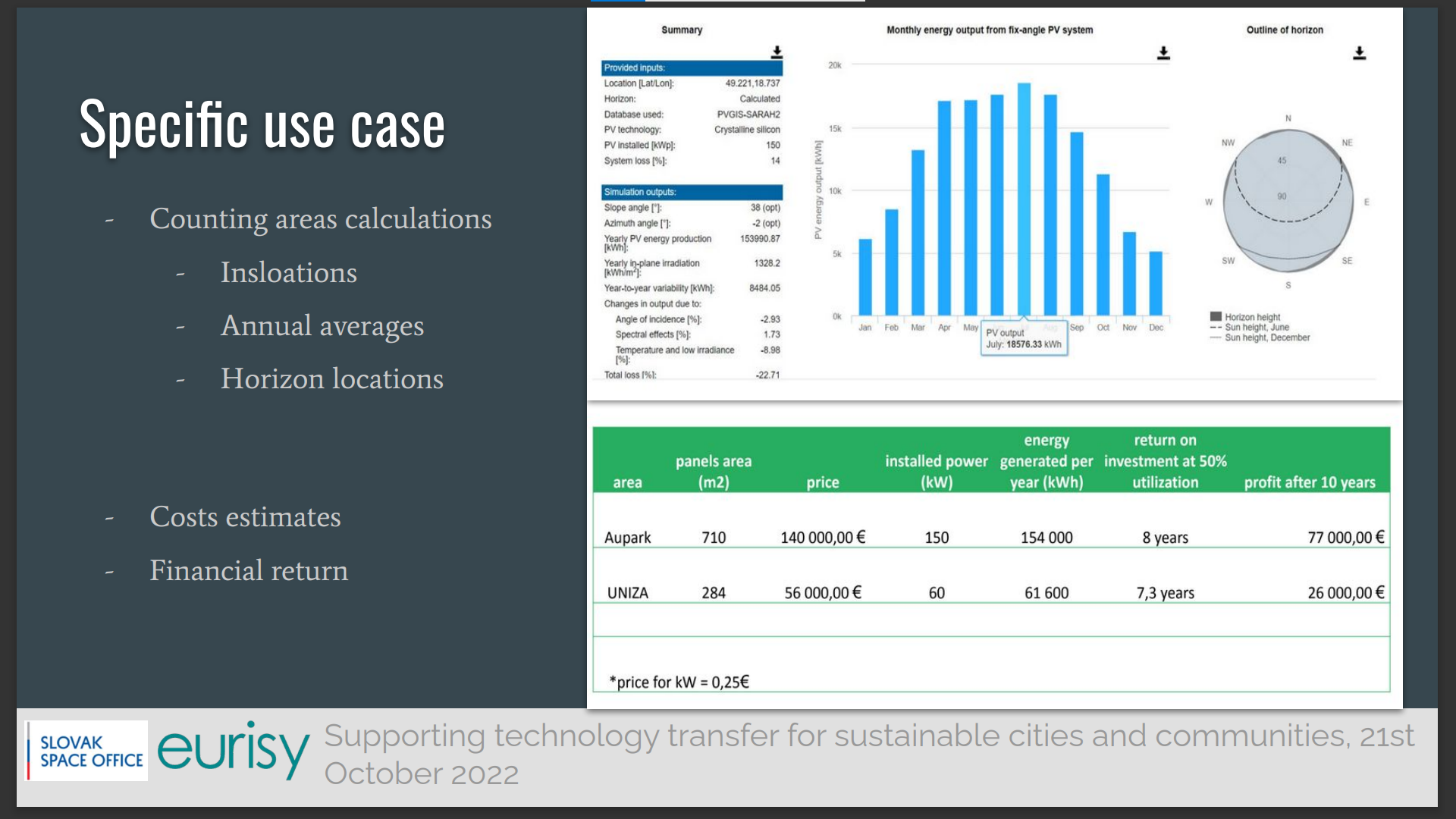 The app wants to use citizen science as a way to actively engage people in data collection and mapping. In this sense, Citythons are not only a means to come up with new solutions, but also an occasion to train the young generation on the potential of satellite imagery to design, implement and monitor policies to make cities more liveable and sustainable. 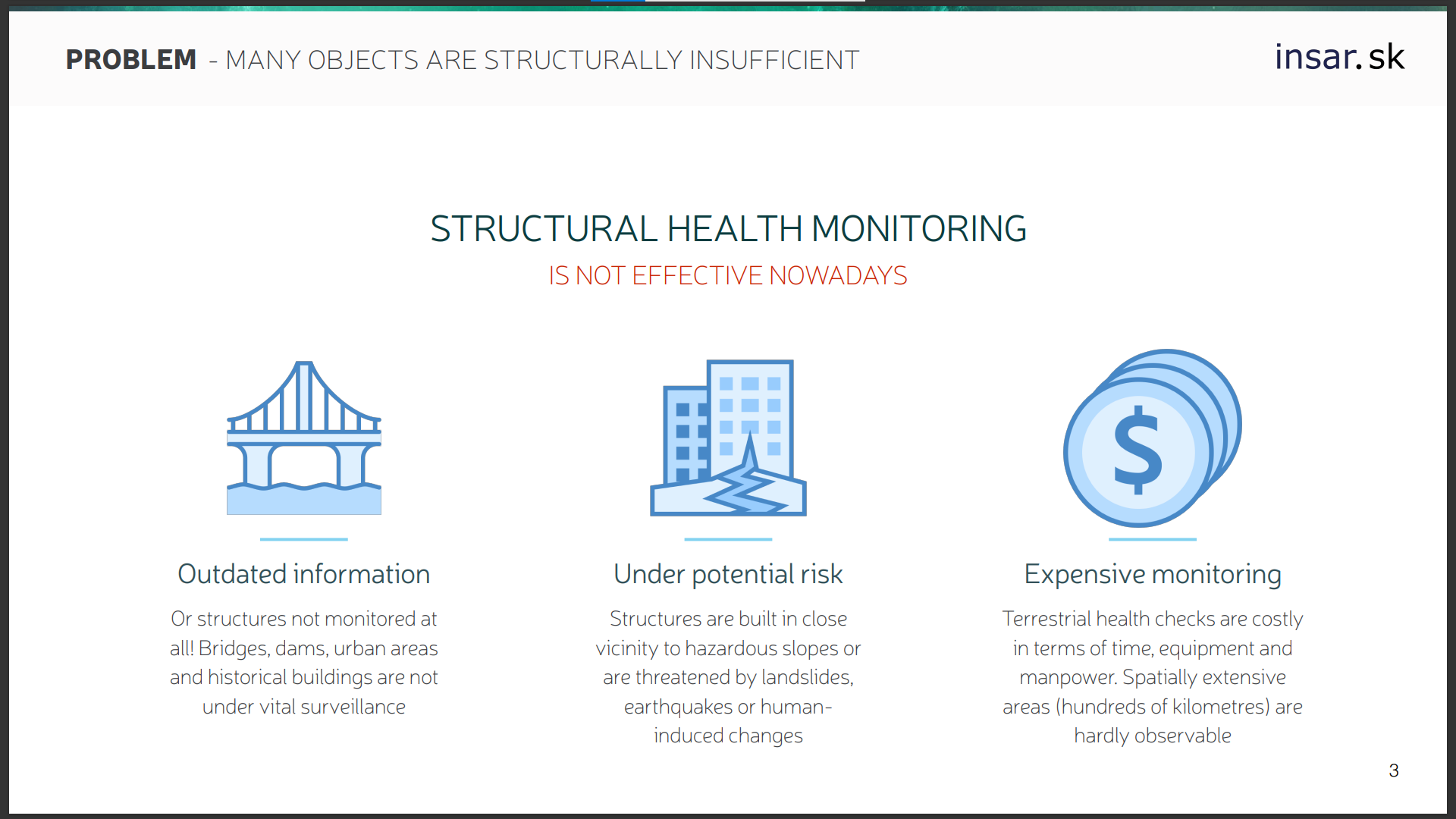 Finally, Mr Matus Bakon presented some of the products developed by INSAR s.r.o. to monitor urban infrastructure with the support of satellites.

The stability of buildings in urban areas is threatened by events like landslides and earthquakes and collecting in-situ measurements to better prevent and manage damage is often expensive and time-consuming for local authorities. 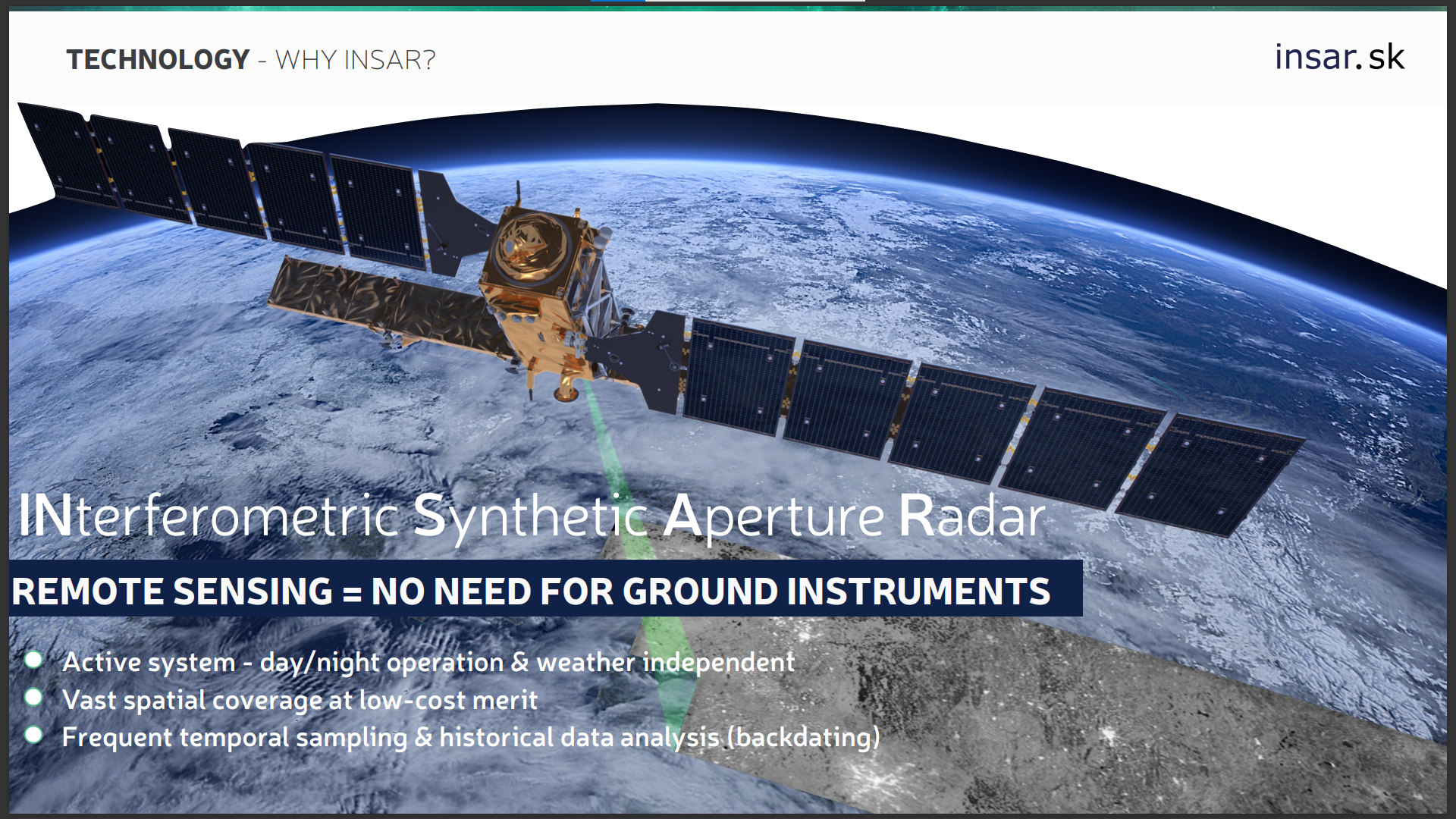 The app developed by INSAR provides visual alerts on the conditions of roads, rails and infrastructure. 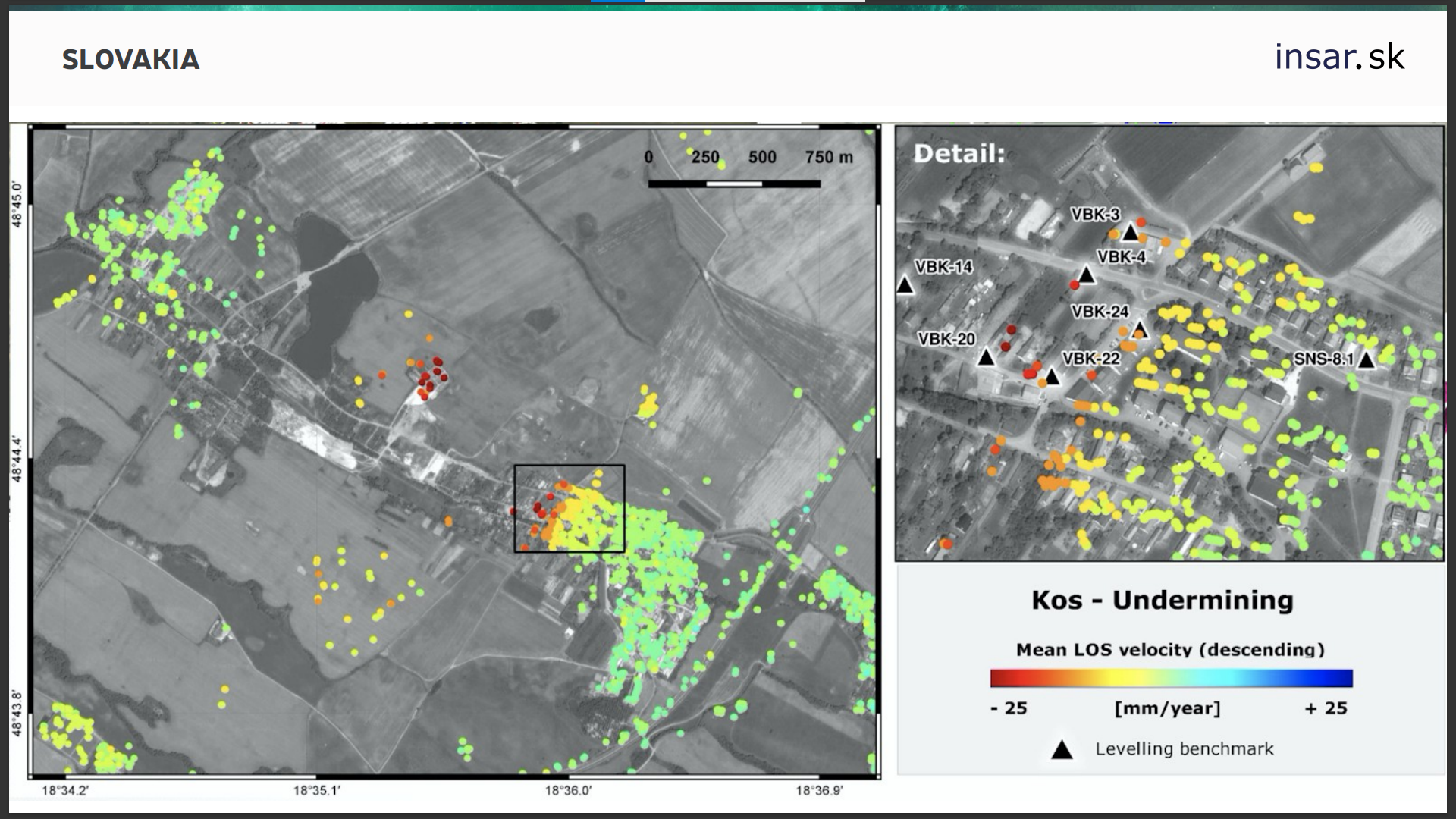 The application relies on satellite INSAR data and provides guidance to urban decision-makers in a number of cities, for example in New Delhi, in India, but also in Slovakia, where the company provides data useful to prevent and understand damage to buildings caused by undermining. 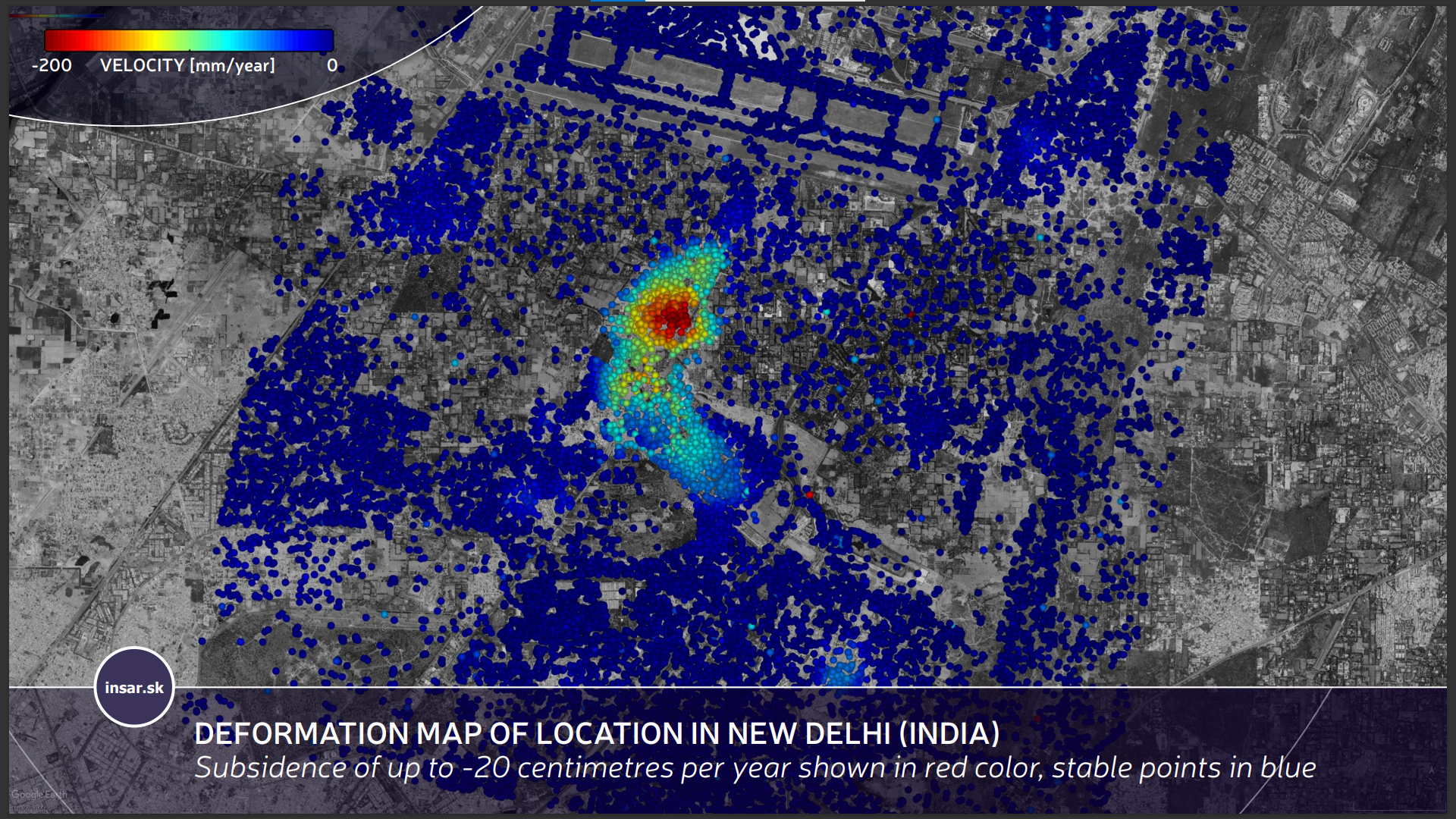 The use of satellite data allows customers to limit ground inspections and to have an historical overview of soil movements over a vast area. 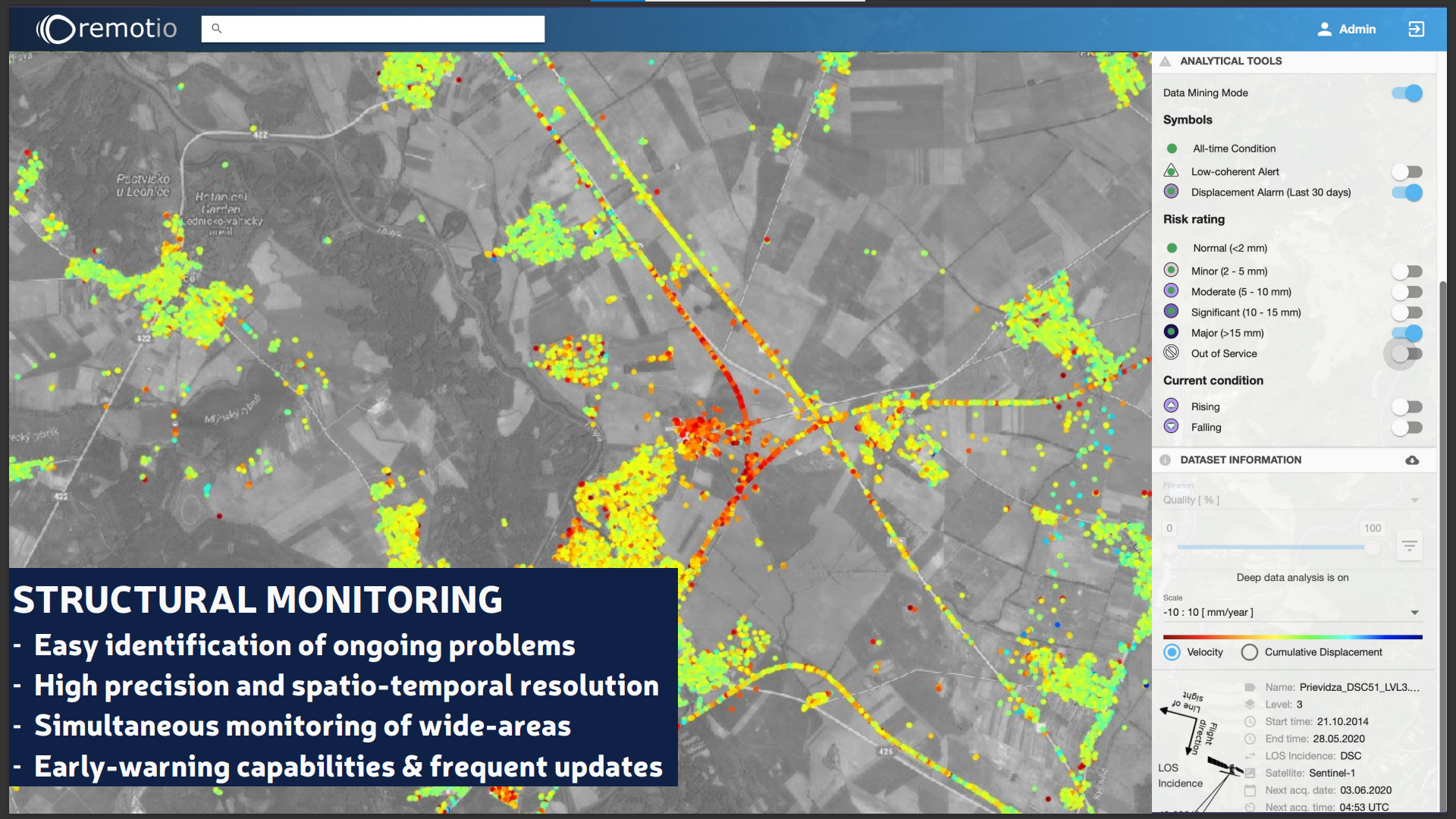 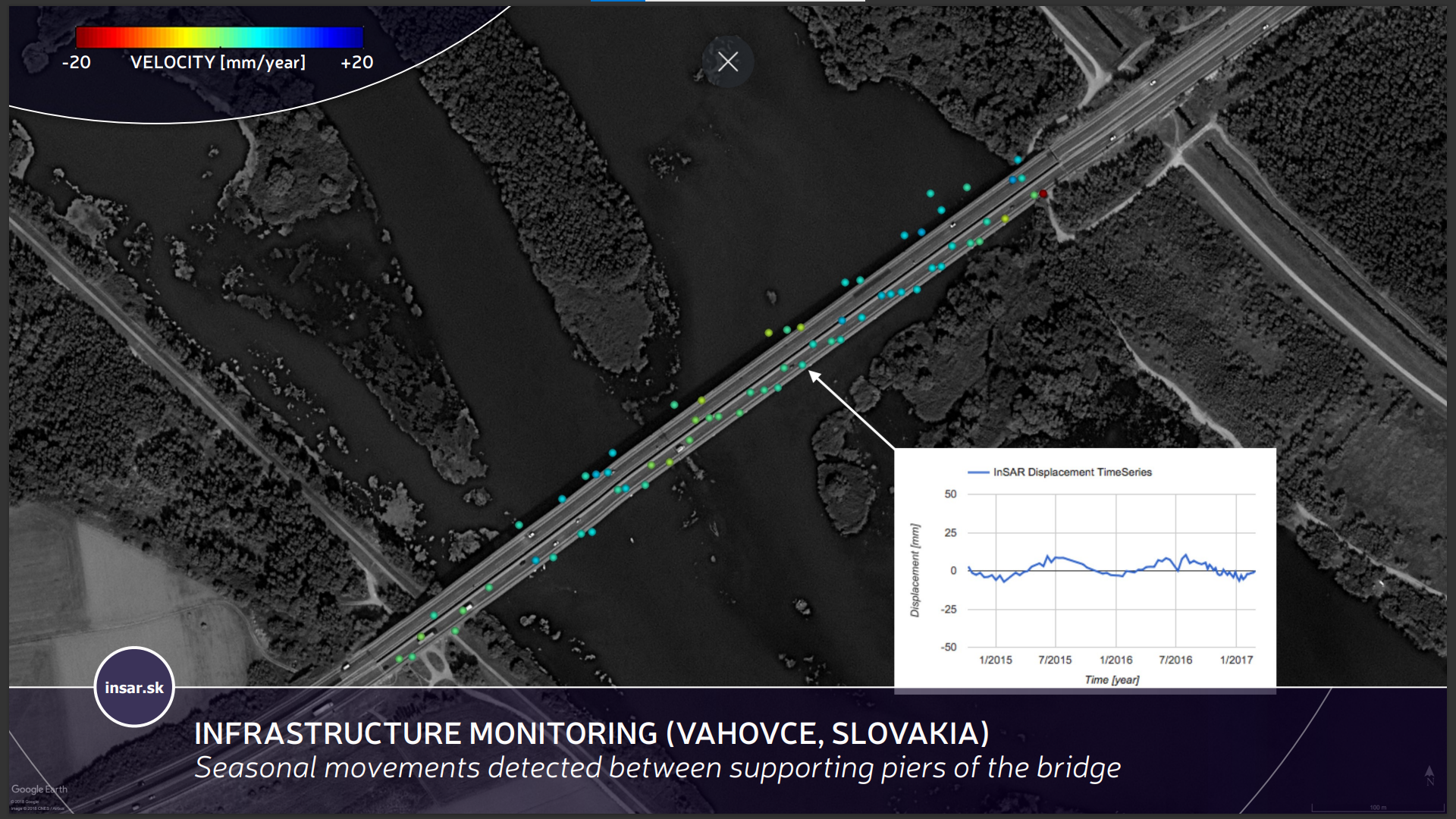 To know more about the activities of the Slovak Space Office visit: https://spaceoffice.sk/

Satellite technologies for smart cities and sustainable communities in Slovakia

Internet of Things: solutions for connecting in-situ measurements and satellites

From satellite data to smart solutions for cities: Experience with Citythons

Satellite data as a critical asset for urban infrastructure monitoring

Stay tuned for the next webinar of the Eurisy Members’ Corner that will be hosted by the German Aerospace Center (DLR) on the World Settlement Footprint initiative on the 4th of November 2022 between 11:00 AM and 12:00 PM CET !