Since its inception in 2004, the biennial Hubert Curien Award recognises outstanding efforts to help society benefit from space.

WELCOME TO THE HCA 10TH EDITION! 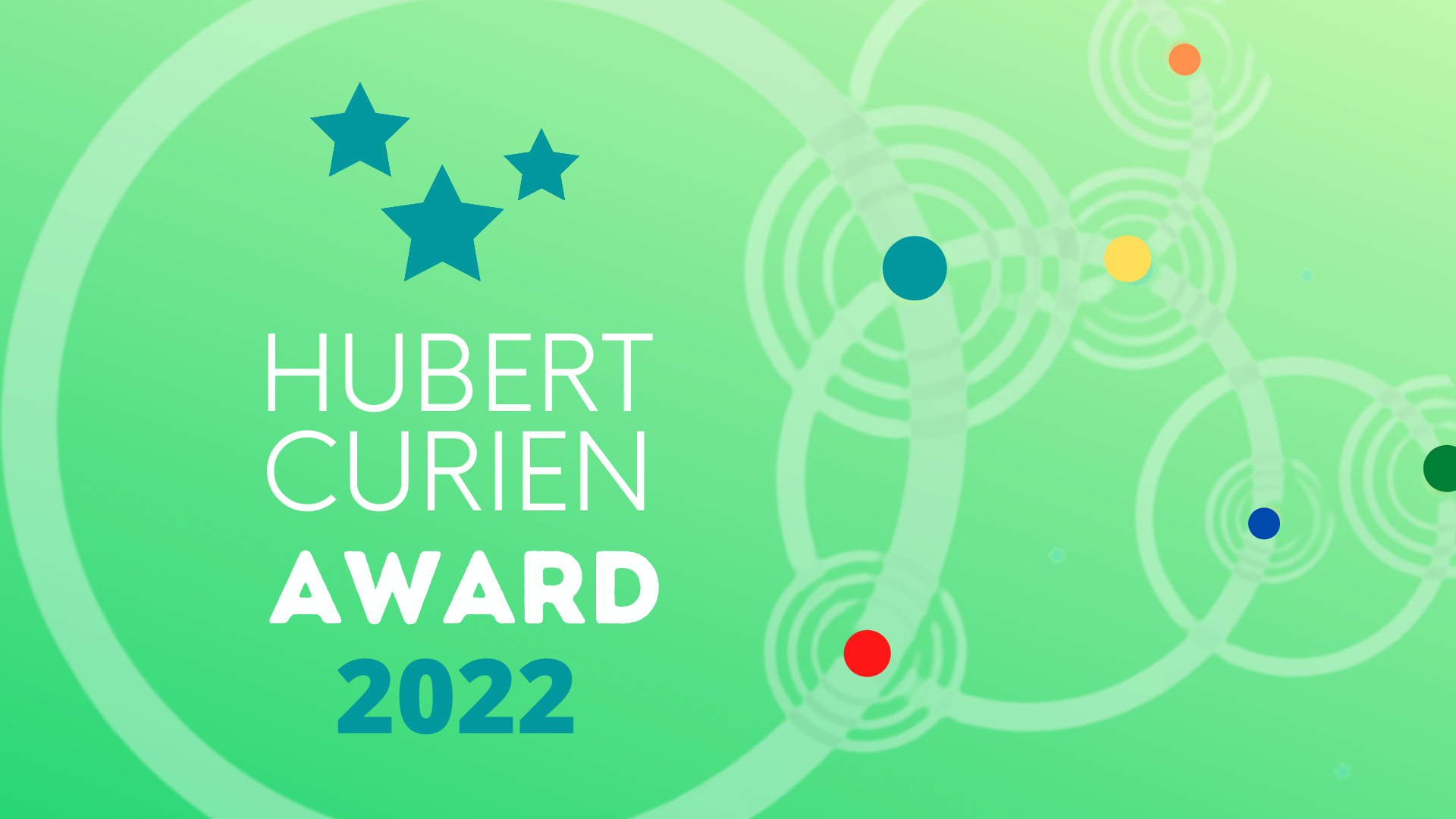 The 10th edition of the Hubert Curien Award has been awarded to Amalia Ercoli Finzi!

The Hubert Curien Award is a historic biennial Eurisy endeavour commemorating the legacy of its founding father. The prestigious Award recognises outstanding efforts to help society benefit from space. Every two years, a high-level international jury selects a winner among a list of nominated candidates. Any person or organisation demonstrating dedication in the field of international cooperation in space science and technology, or in the promotion of space applications and their benefits to society, is eligible for a nomination.

This time we celebrate Amalia Ercoli Finzi for her lifelong commitment and work in space exploration!

Amalia Ercoli Finzi was unable to attend the ceremony in person, but participants addressed the participants through a video message.

Director General of the European Space Agency Josef Aschbacher had the honour to hand over not one but two trophies!

Due to the pandemic, the awarding ceremony took place online in 2020, but this year our previous laureate Magali Vaissière finally received her prestigious award! 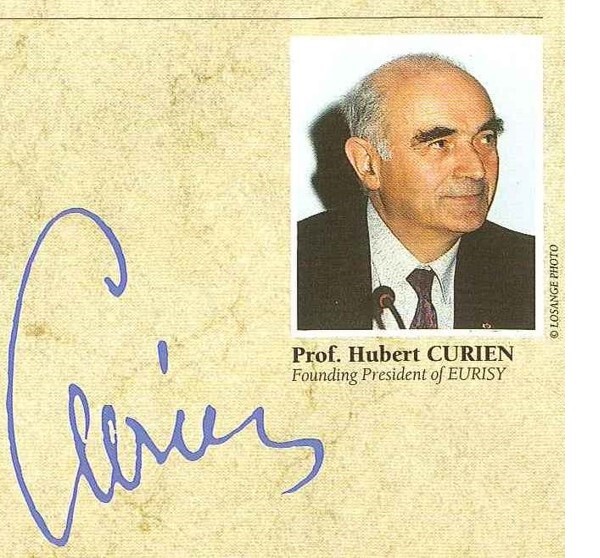 Professor Hubert Curien, sometimes referred to as the spiritual father of European space, was active as President of CNES and in ESA before becoming minister of Science and Space in France. As the Founding President of Eurisy in 1989, Hubert Curien painted the visionary picture of a new generation of cross-sector scientists who would “go beyond their own specialisation” and “aim to encompass the whole complexity of human, cultural, environmental systems in which society evolves”, in order to “provide decision-makers as well as citizens with the indispensable elements for big society choices”. By acting collectively to bridge space and society, Eurisy preserves and carries forward this vision.

Creating public awareness of the importance of these issues and informing young people in particular of the humanly and vocationally rewarding prospects offered by satellite systems: these are the tasks assigned to Eurisy.

All individuals, teams or institutions with proven merits in bridging space and society are eligible to be nominated by Eurisy members.

Article 1. Work in all fields of activities is eligible, provided it is a valuable contribution to the objectives of helping society to benefit from space. No geographic restriction applies.

Article 2. All nominations must clearly state the merits for which a person/ team/ institution are nominated. In the case of the nomination of a team or an institution, its representative must be clearly identified in the application form.

Article 3. Eurisy Full Members have the exclusive prerogative to nominate one or more candidates for the award. The Full Members’ delegates to Eurisy will be invited to nominate individuals/teams/institutions on behalf of their organisation using the online application form.

Article 4. The Eurisy Council representatives will select a shortlist of five outstanding candidates. The Hubert Curien Award Jury will select the final laureate among the five candidates of the shortlist, through successive ballot votes until a majority is reached for one candidate. 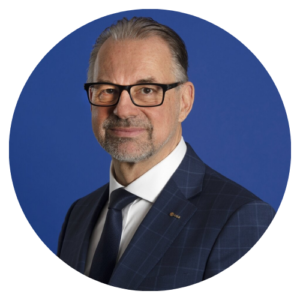 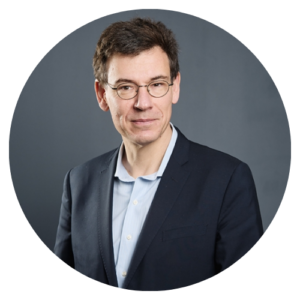 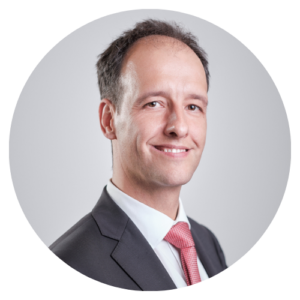 Executive Director of the EU Agency for the Space Programme (EUSPA) 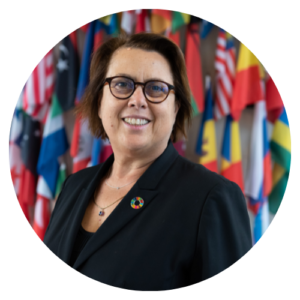 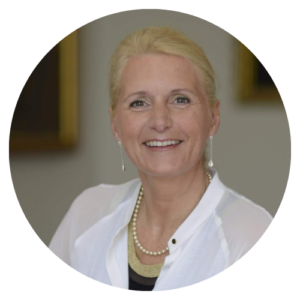 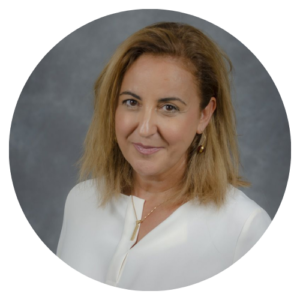 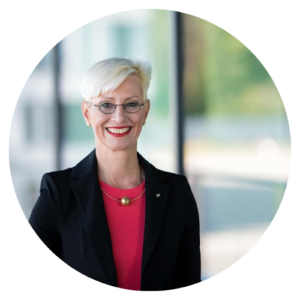 Chair of the German Aerospace Center (DLR) Executive Board 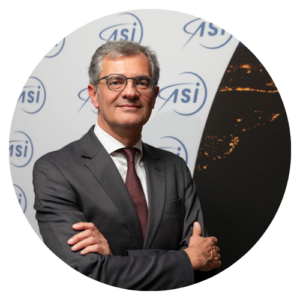 Magali Vaissière was selected as the winner of the 9th edition of the Huber Curien Award. She has been instrumental in the development of the ARTES programme boosting the development of hundreds of satellite based oservices , and thousands of jobs created.

“This award represents all the success I have achieved with my team at the European Space Agency. Indeed, alongside the partnerships with satellite operators and manufacturers that we have implemented in the field of satellite communications, this prestigious award underlines the wealth of downstream applications that we have supported for the benefits of people on earth, as well as for the growth of the economy and competitiveness of the industry.”

Simonetta Di Pippo was the first woman to receive the award. It was a recognition for her work to raise global awareness of the importance of space technology and satellite applications in society. 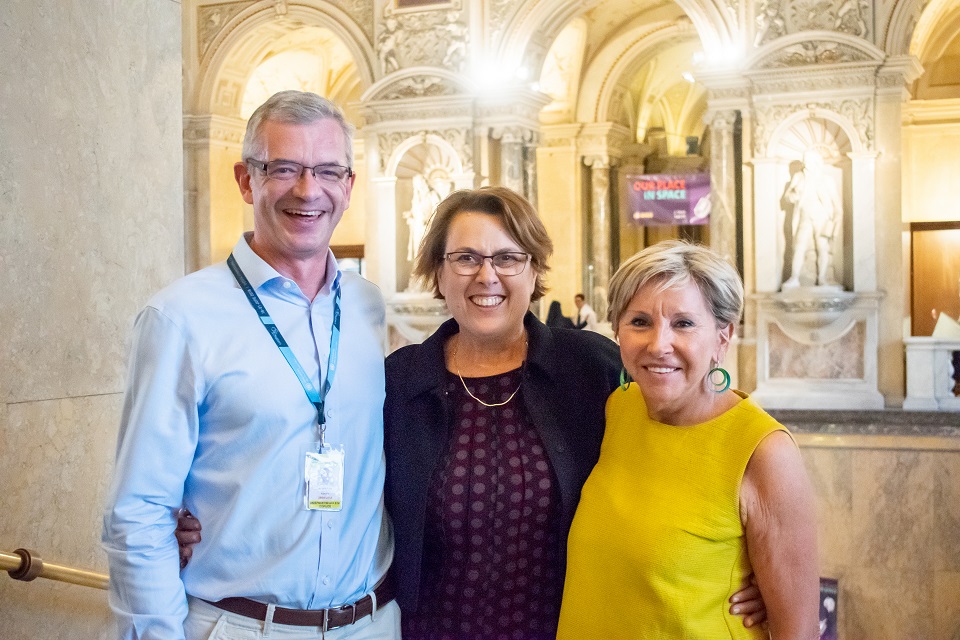 “As the Director for the United Nations Office for Outer Space Affairs, I lead a team working tirelessly to bring the benefits of space to everyone, everywhere. It is, therefore, a great honour to have this work recognised by receiving the prestigious Hubert Curien award. As the first-ever female recipient of the award, I also hope this recognition goes on to inspire a generation of future female leaders in the space sector.”

The Summer School Alpbach was designated as the winner of 7th edition of the Huber Curien Award. Throughout the years the School distinguished itself as a unique opportunity to promote space as an exciting and challenging enterprise for future generations of leaders and professionals.

The Award was presented to the School officials during the Opening Ceremony on the occasion of the School celebrating its 40th anniversary.

Chris Austin Hadfield is a retired astronaut who was the first Canadian to walk in space. He opened up new frontiers in popularising human space flight and space in general. As Commander of the ISS he conducted a record-setting number of scientific experiments. He gained worldwide acclaim for his breath-taking photographs and educational videos about life in space. With his music video, a zero-gravity version of David Bowie’s “Space Oddity”, he scored a major hit. Through the pioneering use of the 21st Century online communication forms he did more than anybody else for increasing space awareness. 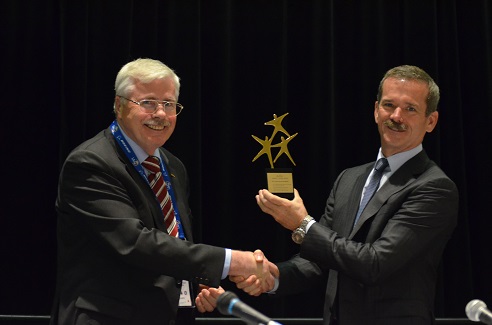 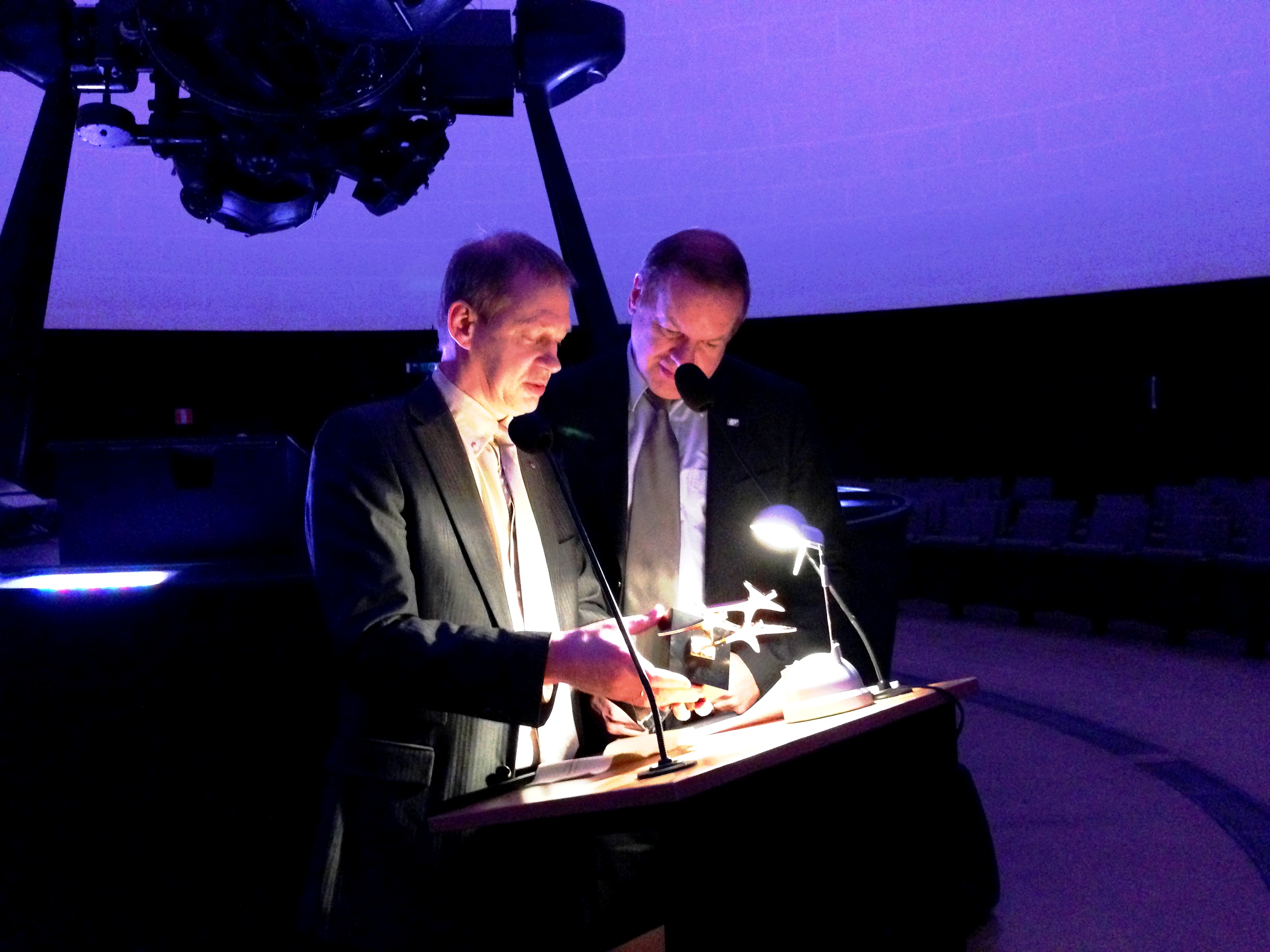 Prof. Walter Peeters, ISU President: “ISU is proud of this Award. It stresses the Intercultural, International and Interdisciplinary approach which is the core basis of all its programs. Space is a utility and an integral part of societal progress. In addition to the basic knowledge in science and technology, all alumni of ISU are provided with a good insight in these societal aspects in order to make sure that in their careers they will always take into account humanistic and ethical values.”

In 2002, Frank De Winne participated in the Odissea mission, an 11-day support flight to the ISS. In 2009 De Winne performed the OasISS mission, a long-duration spaceflight to the International Space Station. During this flight De Winne became the first European and the first non-American and non-Russian Commander of the ISS (expedition 21). 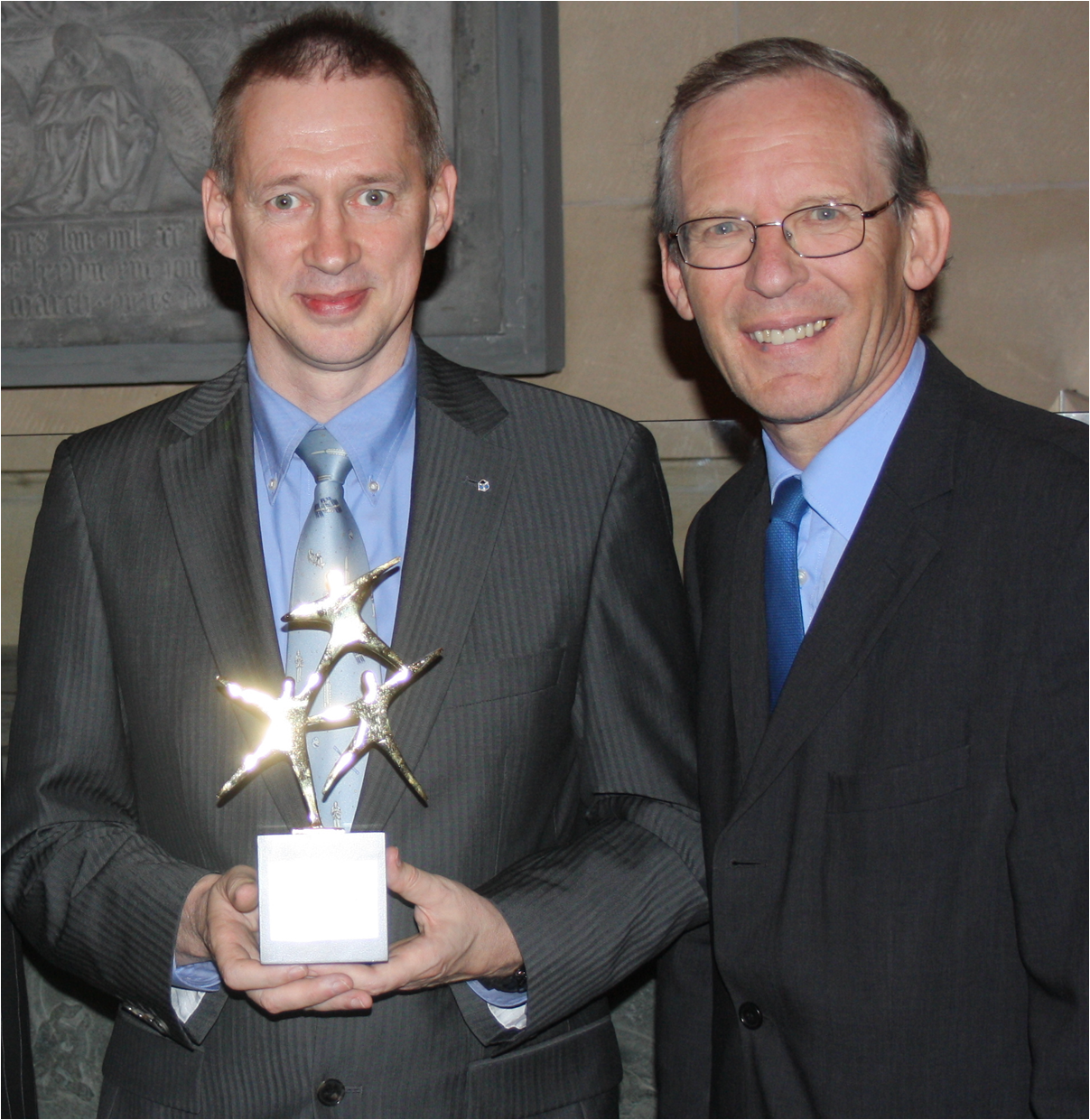 As an expert in physics and astronomy, Prof. Roger-Maurice Bonnet played an important role for both French and European missions in space science. He established the first long term programme of ESA called “Horizon 2000”, and also left his mark on the future of the French Space policy by helping to define the prospective for future science programs on a 2015-2020 horizon. 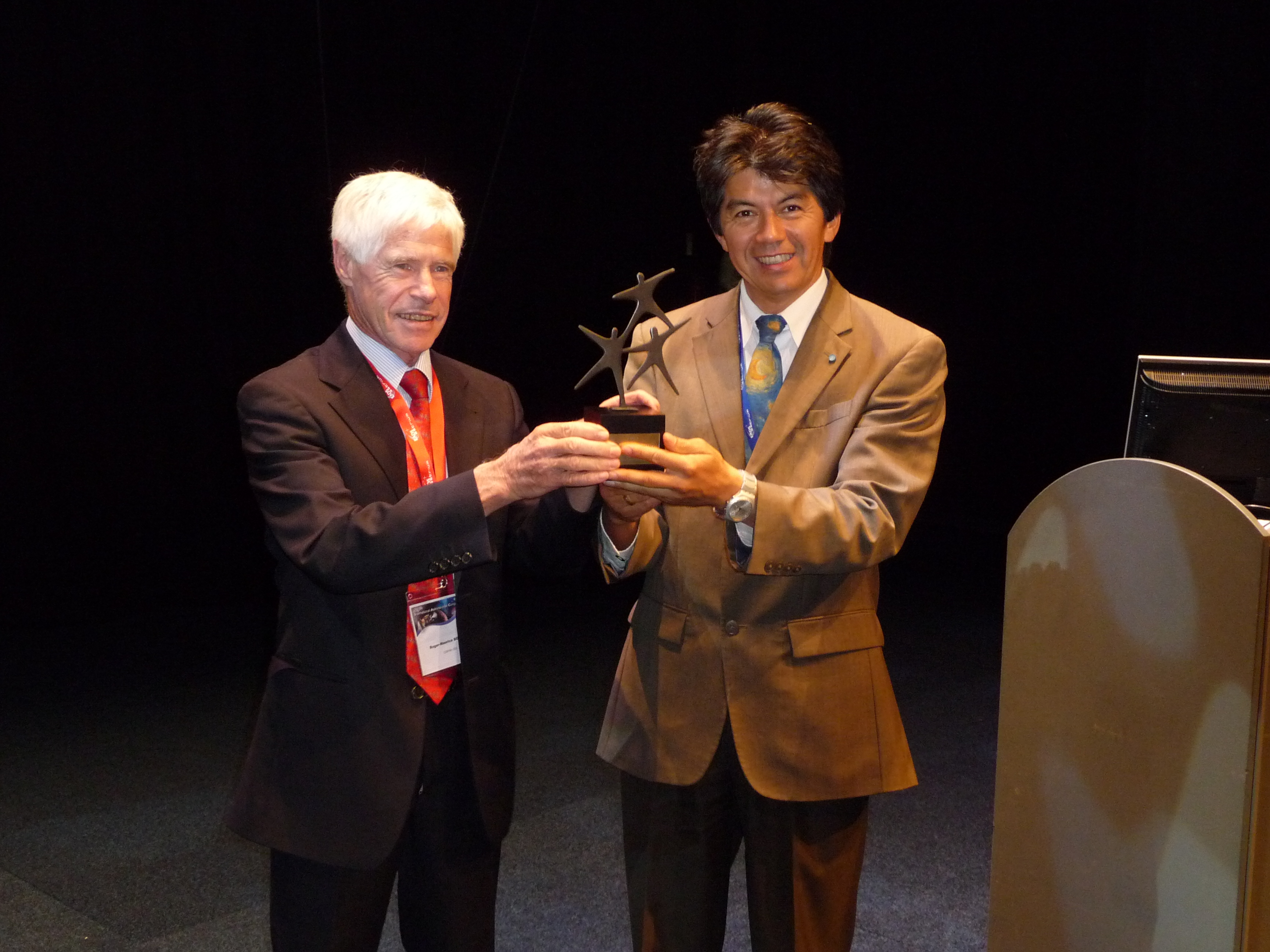 Prof. Bonnet received his award at the International Astronautical Congress in Glasgow, during the adequately chosen plenary “Lunar and planetary missions – science and exploration”. During his brilliant career Prof. Bonnet has significantly contributed towards the peaceful use of space and international cooperation.

Dr. Sergio Camacho-Lara had a broad academic career. With degrees in physics and space sciences, he became a professor and established a remote sensing laboratory at the Instituto de Geofsica. 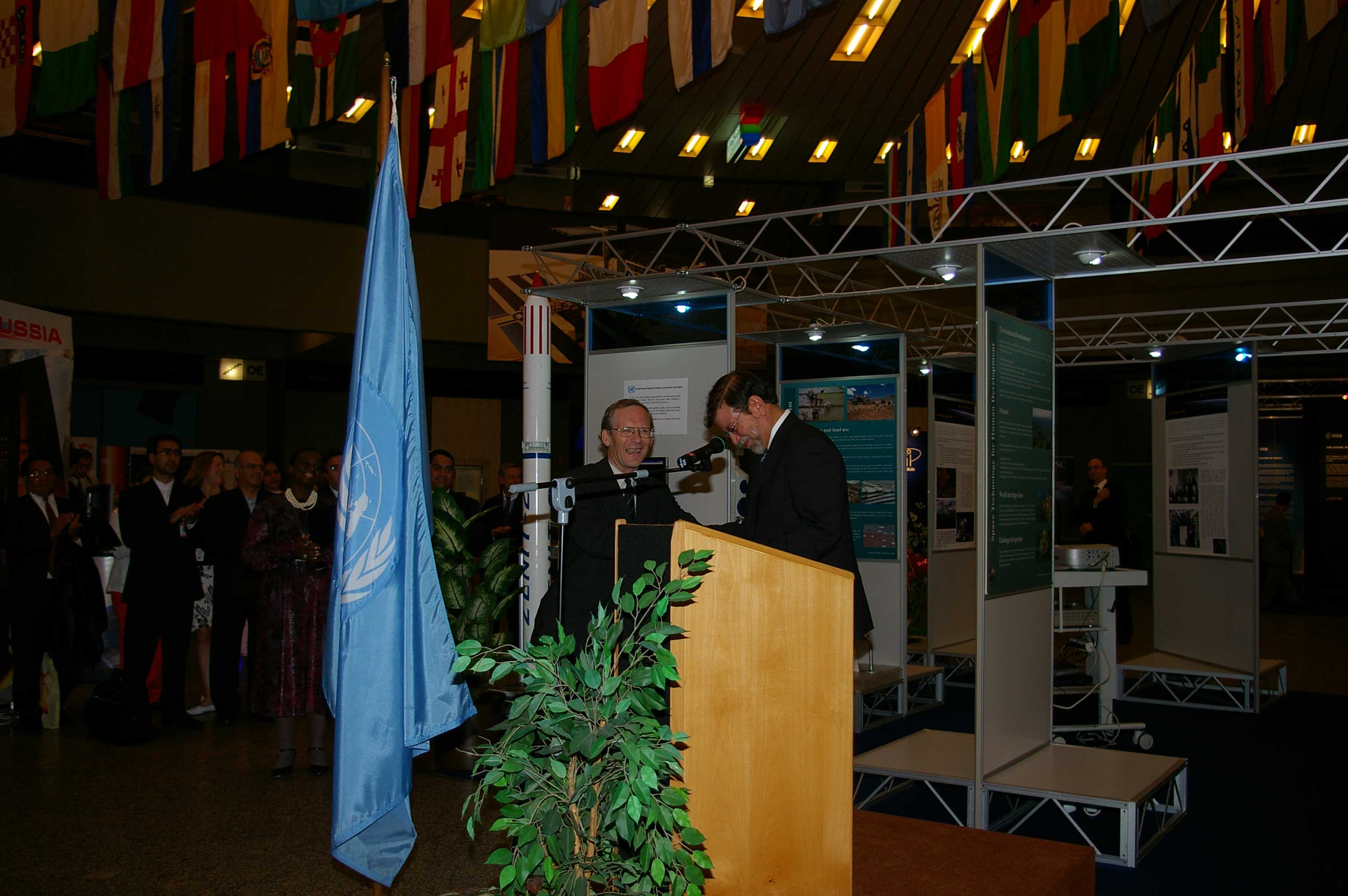 Dr. Gabriel Lafferranderie was the first holder of the Hubert Curien Award. With a background in political science and a doctoral degree in law, he contributed to the legal affairs of CNES and ESA, taking an active part in the drafting of the ESA Convention and of several international agreements concluded by ESA. Dr. Lafferranderie has published extensively in legal and space law journals and books. He has been an active member of the International Institute of Space Law (IISL) and of the European Center of Space Law (ECSL).