To overcome the Covid-19 lockdown, Flanders Classics developed a virtual cycling platform featuring the real-world terrain of the Tour of Flanders replicated with satellite navigation data.

Flanders Classics is an official cooperation among the organisers of the traditional cycle races held in Flanders, among which the Tour of Flanders. Since its founding in 1913, the Tour of Flanders has remained a preeminent cycling race taking place every spring in the Belgian region of Flanders. This annual sporting event has gone on without missing a beat, holding the longest uninterrupted streak of any cycling classic. As one of the five “Monuments” of cycling (considered as the most prestigious and toughest one-day races), the Tour of Flanders is notorious for its cobblestone hills. Every year, cyclists from around the world look forward to tackle the treacherous terrain, which demands a high level of agility and endurance.

The 2020 season has been a disrupted one for professional cyclists. The Cobbled Classics held in March and April are among the traditional opening races of the season. However, COVID-19 put a spoke in the wheels postponing or even cancelling most races. The Tour of Flanders was no exception being eventually rescheduled to October.

Fortunately, Flanders Classics have been working on a new project to offer amateurs a virtual edition of its famous cycling race since autumn 2019. But with the lockdown in March 2020 happening just a few weeks before the Tour of Flanders, the organisation had to pick up the pace. In an attempt to keep the event alive, Flanders Classics was looking for an innovative approach to create a virtual alternative of the race.

In April 2020, Flanders Classics launched a special “Lockdown Edition” for a select peloton of professional riders. The Digital Tour of Flanders was developed in collaboration with Bkool, a Spanish indoor training company. It featured replicated real-world courses based on satellite navigation data. Virtual routes can be built with data coming from a Global Navigation Satellite System (GNSS) enabled cycling computer. Someone rides the circuit in the real world, and the resulting data file contains all the information (distance, elevation, coordinates, etc.) needed to create the track in a virtual world. The sense of riding real-world roads and hill climbs can then be simulated with a smart trainer which constantly changes resistance according to the satellite navigation data of the terrain. While riders do not experience the cobbles, they have to push hard on their smart trainers to overcome the virtual hilly landscape and extreme gradients. 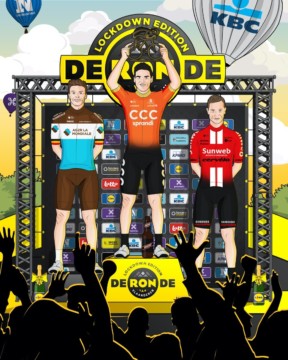 With different 3D camera angles (helicopter, motor, front, etc.), recorded real-life images of the hills, and live performance data of the riders on screen, the first edition was already impressive. However, there was not enough time to fully customise the virtual scenery, which featured a standard Mediterranean landscape of the Spanish-based Bkool app. In their pursuit for an even more realistic environment, Flanders Classics pushed for a permanent virtual cycling platform. This resulted in the Proximus Cycling eSeries, which was developed together with RGT Cycling. In order to produce realistic representations of the road and the surroundings, the virtual RGT environment goes the extra mile with street level imagery. Additionally, satellite imagery can also provide useful information to the developers about the environment, to make the 3D-generated natural and human landscape (vegetation, landmarks, housing density, etc.) more realistic. As covered in our highlight about innovative applications of satellite data in cycling, tracking the progress of riders on the real-world circuit is another great tool that comes with the use of satellite mapping services. 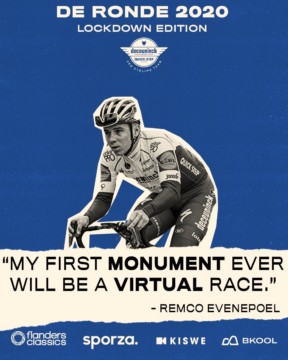 For the first time, Flanders Classics was able to create a virtual version of the Tour of Flanders, “De Ronde 2020: The Lockdown Edition”. Streamed live on YouTube and broadcast through the country’s national television with live commentaries, thirteen world-class cyclists from eight professional teams raced against each other on their smart trainers at home over the last 32 km of the official Tour of Flanders course. This gave teams the opportunity to display their sponsors, while the organisation was also able to integrate in-game sponsorship exposure with custom avatars for team jerseys and partnership visibility on road animations, side fences and beach flags. #DeRonde2020 went viral reaching more than 50 million cycling fans worldwide.

This pioneering experience gave rise to the development of the Proximus Cycling eSeries, a free and realistic cycling environment where cyclists can take on challenges all year round. Through the virtual cycling concept, fans worldwide get the chance to get to know the roads where Flandriens provide a spectacle every year.

“The Proximus Cycling eSeries is an ambitious virtual cycling project with partners RGT Cycling, META and Proximus. We offer plenty of challenges with great prizes in the most realistic environment on the market. This allows us to collect data, to target a younger audience and to offer the typical Flemish courses to the whole world all year long. Happy to confirm our position at the front of the innovation peloton, even when it’s virtual.” – Tomas Van Den Spiegel, CEO Flanders Classics