Communications satellites behind the scenes of the Olympics

The Tokyo Olympics of 1964 were the first in history to be broadcast directly via satellite, making it possible for viewers in multiple continents to watch the Games as they happened. The Tokyo Games became known as the “TV Olympics” but only marked the beginning for satellite communications systems. Fifty-seven years later, the Olympic Games have returned to the Japanese capital. As spectators are very limited due to sanitary restrictions, audiences around the world rely on broadcasting services. To this day, communications satellites are being used to provide global coverage. In this episode of “Satellites for Sports” we uncover the satellite segment behind the scenes of the Olympics and other sporting events, even at local level.

The Telstar 1 was the world’s first active communications satellite and the world’s first commercial payload in space. For the first time, pictures of world events could be transmitted globally within minutes. The Telstar satellites represented a gamechanger, especially for football. Up until the 1966 World Cup, a soccer ball simply had the natural colour of the leather from which it was made. However, to aid visibility on black and white football television broadcasts this had to be changed. It resulted in a high-contrast black and white design called the Telstar (Television Star), a clear tribute to the Telstar satellite which was also spherical and dotted with solar panels. 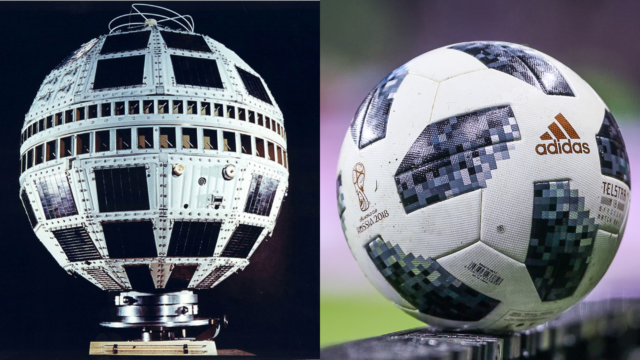 The iconic design was celebrated with the Telstar 18, the official match ball during the 2018 FIFA World Cup. 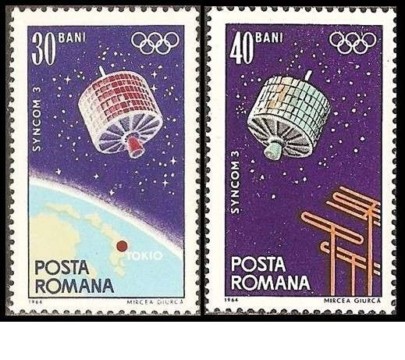 Two years after the launch of the Telstar 1, the Syncom 3 became the first geostationary communications satellite. By virtue of its orbit 36 000 km above the equator, the satellite span around the Earth at the same speed as its rotation, providing a continuous service. No wider than the length of a baseball bat, weighing just 68 kg and generating a mere 29 W from its solar cells, it beamed TV pictures of the Tokyo Olympics in 1964 across the Pacific Ocean and could cope with just one TV channel. While another satellite, the Relay-1, forwarded the data from the US to Europe, landlines and air traffic were also mobilised to get the images around the globe.

Today there are hundreds of communications satellites in geostationary orbit and they all benefit from the 60 years of advances in electronics. State of the art satellites can weigh up to 6 tonnes and generate up to 20 kW of electrical power from their banks of solar cells. Their transmission power has also increased significantly, so that the signals can be received by much smaller dishes, and nowadays TV coverage can of course be directed to any portable device over the internet.

Witnessing any sporting event as it happens anywhere in the is something we have come to take for granted. The 2008 Beijing Olympic Games attracted 4.7 billion viewers (70% of the world’s population at that time), the largest global TV audience ever. After last year’s postponements, the Summer 2021 is stacked with major sporting events, such as the Euro 2020 and the Olympics. In order to cover such special live events , extra bandwidth is allocated alongside regular broadcasting under what satellite operators call “occasional use transmission”.

In one of our recent reports, “A closer look into satellite-based solutions fighting Covid-19”, we emphasised the importance of satellite communications to increase broadband capacity. Due to the enormous amount of tele-education and teleworking, both during the lockdown and the recovery phase, the need for broadband capacity has rapidly increased. Satellite operators have seen a rise of up to 70% in data traffic across Europe and the Americas. Satellite communications also proved to be crucial for telemedicine, allowing healthcare professionals to help their patients through remote diagnosis and periodic checks.

Satellite technology has become an accessible tool. Apart from major sporting events, satellite communications are also being used on a much more local level. Even in minor leagues, small and semi-professional clubs have the opportunity to broadcast their matches live via an internet service that relies on satellites.

This concept was developed under the Fullview Satellite project of the ESA Business Applications, an initiative of the European Space Agency to help the industry develop new space-based services. The initiative demonstrates that satellite communications can help broadcasters as they finalise transmission services for their programming. After being converted into bits (uplink), video footage travels via satellite signals to the teleports of a satellite operator (downlink) and can then be distributed over a fibre network and delivered to the viewer over the internet. Especially now with ongoing restrictive measures, this gives supporters the possibility to watch the matches at home or on a mobile device. 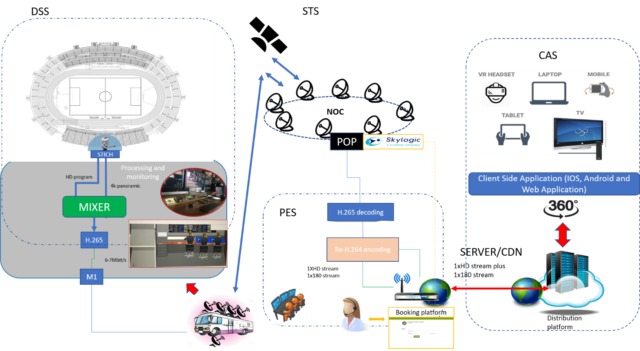 Furthermore, space technologies can help filling the gaps in ground-based networks. Broadcasters need to deliver content from all sorts of locations, but sport venues, team hotels, or training camps are not always near a fibre connection. Whether it is from a densely populated area in central Europe, the rainforest in Brazil, or along the Japanese coastline, broadcasters count on satellites to secure connectivity. Owing to its inherent attributes of global coverage (reaching where terrestrial networks are not deployed), resilience (independence from terrestrial networks), security and capacity, satellite communications remain a paramount factor for broadcasters.

Satellites will also have a key role in the deployment of 5G services. The deployment of terrestrial 5G is expected to be gradual and focused on high-density population and traffic areas (large cities, venues, highways, high-speed rail networks). The Space for 5G initiative of the European Space Agency aims to integrate satellite navigation and communications into vertical market sectors such as transport, public safety, media, and entertainment.

More than ever, video, voice, and data traffic require larger amounts of bandwidth and push for the continuing development of satellite technology. Satellite communications have revolutionised society and continue to change the way global communication and economies work.