This article follows up on our Satellites for Sports series, elaborating on the dissemination of space-based technologies across the European and global sports industry.

One of the most prominent examples of space data in sports is the boom in satellite-based tracking devices. After smartphones, wearables are the second most sold Global Navigation Satellite System (GNSS) devices. According to the European GNSS Agency (GSA) market report, GNSS wearables reached 70 million shipments in 2019 alone.

The silver economy is a key driver, mostly for health-related solutions. But also the democratisation of sports and fitness equipment for all ages plays an important role. In an earlier episode of Satellites for Sports, How satellite navigation tackles Covid-19 in sports, it was already pointed out that this technology can be an effective tool to keep both amateurs and professional athletes as fit as possible during the lockdown and return-to-play period.

While smartwatches represent the biggest share in this trend, performance tracking devices have set foot on all levels in outdoor team sport. Our recent series of success stories demonstrates how satellite tracking is being deployed in different sports and on multiple levels; from a professional women’s field hockey team in the Netherlands, and Irish amateur athletes in the Gaelic Games, to a semi-professional rugby club in the United Kingdom. In this highlight, we explain the technology behind the trend.

While services vary from one company to another, the technology to track the physical performance of players implies similar features. The most distinctive are the, low-weight and waterproof wearable devices incorporating a GNSS receiver, motion sensors (notably: accelerometer, gyroscope and magnetometer), and heart-rate monitoring capabilities.

Depending on the product, extra features are added to measure even more deeply physiological and activity variables, such as breathing frequency, skin temperature, and posture.

The device goes in a compression vest with a pocket located on the back, which keeps it firmly in place. The reason why the device goes on the back of the athlete is because trackers on the wrist, such as a smartwatch, are generally not allowed in competitive games. Moreover, a device placed on the back allows for better accuracy by reducing the amount of noise in variables, as it also points directly at the sky, avoiding body shadowing which can obstruct satellite signals. 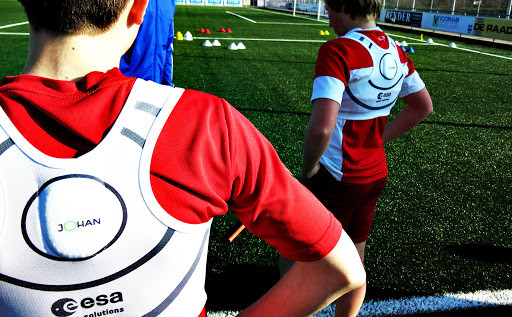 As for the software, a digital platform allows to load, store, visualise and analyse the data collected by the wearable tracking devices. Coaches can then follow the performance of their players on a digital interface such as a tablet. The data can be transmitted via Bluetooth for post training or game analysis. Some systems even allow for continuous real-time and automatic data communication through wireless connections and cloud services.

Typically, metrics can be tailor-made and dashboards customised to fit the specific needs of the user. For example, the performance indicators and mechanics in rugby, as well as the field itself, are different from those considered in hockey. Scrum events for instance, which are a means of restarting play in rugby, have been associated with a higher risk of injuries.

Several companies developed software tools (e.g. Sonra Scrum Analysis and Rugby Suite) designed to better quantify these game-specific demands. These tools enable coaches to monitor scrum load and contacts in games and training. Following post-session analysis, coaches can read datasets about scrum duration, the total impact and the peak force of the impact during engagement, the synchronisation of the engagement of each player measured in milliseconds, as well as the time it takes for a player to get back to feet.

The relevant information can be selected in a user-friendly way. The data can then be used for many different purposes, such as to optimise training, injury prevention and recovery, team tactics, scouting, and even fan engagement.

Tracking players can be done in different ways. As every system comes with its own advantages, video analysis and local positioning systems provide alternative, and even complementary options.

Video-based tracking relies on multiple cameras looking for players’ time-motion, and is an excellent tool for tactical analysis because it captures all aspects of the game. However, a lack of mobility in camera setup is one of the limitations of video analysis along with the difficulty to determine the exact point where players move from one speed category to another.

Local Positioning Systems (such as ultra-wideband or Wi-Fi) are typically used for indoor sports, or outdoor sports that are held within a defined area. Again, setting up the system (beacons plus connectivity) can cause additional barriers. On the other hand, satellite navigation does not work well on its own indoor, but when used outside it does not have these limitations. While it provides some tactical insights, satellite tracking shines out in providing in-depth data on velocity and acceleration, position, covered distance, and workload. As a result, GNSS tracking has become the primary tool to monitor physical performance in outdoor team sports. 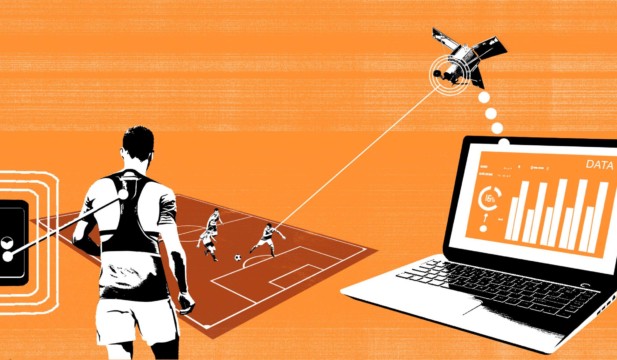 The International Federation of Association Football (FIFA) introduced standardisation of Electronic Performance and Tracking Systems (EPTS) in 2017. An official mark now indicates if wearable technology has been tested to meet the minimum safety requirements of the International Match Standard (IMS). This certification has further stimulated the uptake of GNSS tracking wearables in football as it allows the technology to be used in competitive play.

While satellite tracking is the most suitable solution for outdoor performance measuring, urban areas and large or semi enclosed stadiums can still lead to drop-outs, or signals can bounce off the stadium walls and get swamped by multipath errors. Moreover, the amount of electronic equipment operating in the area can disorientate data transmissions from player-worn devices.

In order to enhance positioning accuracy and reliability in these challenging environments, most sensors rely on multiple satellite systems, such as GPS, Galileo, GLONASS, and BeiDou, as well as on satellite-based augmentation systems, such as the European Geostationary Navigation Overlay Service (EGNOS).

According to GSA test results, GNSS devices achieve the highest possible accuracy with a multi-constellation configuration, especially when GPS satellites are used together with an additional GNSS such as Galileo. This results in high quality values (less than 0.5m error) recognised as military-accepted levels of accuracy. Such precision is required for player-tracking in team sports, as the devices must be capable of accurately recording instantaneous velocity in activities comprising frequent changes in speed and direction.

The more satellites are available, especially when they are spread evenly throughout the sky, the better positional accuracy will be. However, it is not just the number of satellites that counts, it is also about the quality of the satellite reception and signal data that determines how accurate the position and speed data will be.

Currently, there is limited research available on GNSS satellite quality in stadium environments across different sports and in different regions around the world. A study from 2020 performed in the English Premier League showed that the average satellite count for a single football match in each of the stadiums was around 18. The lowest number of satellites reported was 17, which can still be considered high enough for users to have confidence in the integrity of the data collected. 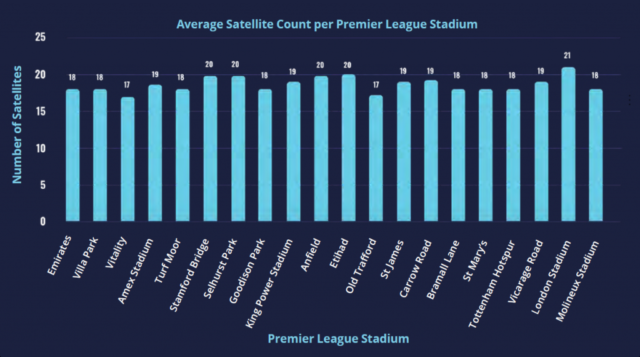 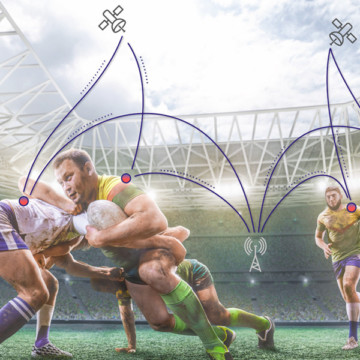 In order to foster innovation and competitiveness of the European industry in satellite navigation , the European Space Agency has come up with the Navigation Innovation and Support Programme (NAVISP). As part of this programme, Thales Geonav IoT was launched in 2018.

This positioning solution allows real-time outdoor and indoor precise tracking. It takes advantage of two existing positioning technologies: GNSS and ultra-wideband (UWB), based on beacons placed around the stadium. The combination of satellite and local positioning systems is designed to overcome satellite signal drop-outs and multipaths, in order to track players with the highest accuracy. In cooperation with the French Rugby Federation, the solution has been deployed inside the Stade de France for testing and qualifying the system.

In cooperation with a European consortium, Thales entered in a new European project, in which the system will be enhanced until the end of 2021 to take advantage of Galileo dual-frequency algorithms and of 5G communication. Once fully operational, both the local UWB and satellite positioning technologies will provide in-depth data about player performance and health. Through the Geonav IoT web application coaches and medical staff will receive immediate feedback on significant impacts of players, as well as accurate localisation information, such as speed or traveled distance, allowing them to improve training and optimise recovery.

The use of satellite navigation for performance tracking in professional sport has increased substantially over the last two decades. As the technology becomes more affordable, its field of application is also starting to exceed the boundaries of elite sport. The spike in performance monitoring at amateur level with smartwatches and mobile apps is an indicator of the appetite for physical data among the general population nowadays. Youth academies are also seeing an increase of GNSS tracking tools. Furthermore, given the rise of smart devices and the esports trend, younger generations can be encouraged to take part in sports and fan engagement by bringing these digital aspects into the game.

Teams are increasingly adopting a data-driven way of working. The use of satellite tracking data can certainly give them a competitive edge and reassure coaches that their players will be in top condition. As such, GNSS has become an invaluable asset for athlete performance monitoring.

That is not to say that the idea of data analysis will replace all other aspects of coaching practice. The element of unpredictability in sport remains a core element, but combining the coaches’ experience and intuitions with technological advancements to make better informed decisions on training priorities, team selection, recruitment, tactics, and player well-being can result in a substantial improvement on a team performance. Finding a healthy balance between data and intuition will be key.